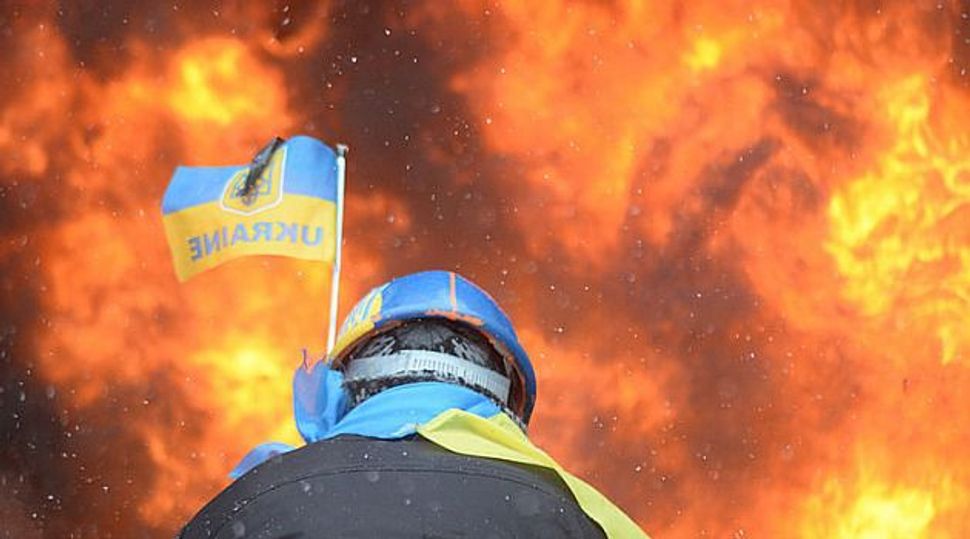 (JTA) — The scenes from Kiev are reminiscent of Cairo in 2011— or perhaps the Battle of Stalingrad or revolutionary Paris.

A ring of burning barricades surrounds the stage on which opposition leaders, European Union parliament members and protesters speak. Images in the news are filled with blood and smoke, burning cars, streets denuded of bricks that have been hurled by one side or another as protesters clash violently with police in the Ukrainian streets.

For me, the shocking images carry an additional weight: having lived in Kiev for a year, I watch with disbelief as a square where I bought ice cream and strolled around dissolves into violent chaos.

I spent a year in Kiev to delve more deeply into my Jewish roots; I was there on a Fulbright grant and spent some of my time translating a novella, written in Odessa in early modern Hebrew.

The rest of the time I spent falling in love with a country that I never thought could have such a hold on my heart. In Kiev I lived near a well where the people of my neighborhood came to draw water. I traveled by train through steppe where white snow blended with the white sky. Old women gave me apples in my grandfather’s village; I dipped my hands in the Black Sea in Odessa.

And now I watch while the streets I walked run red: 26 killed and counting. Government offices are burning, the eyes of the gassed are burning and the words of the speakers burn in the acrid air. I keep a live feed window open on my computer and watch the familiar made into hell.

When violence like this rises up, even the powerful are powerless. The E.U., the U.S., and Russia have had to pause in their endless game of international chess. Ukraine is alone now as the violence spreads from Kiev onward. I think of the shared cigarettes, the conversations on nighttime stoops and over fuzzy phone lines I’ve had with friends and contacts who are now in the melee.

“My friends were shocked at what is happening there,” Anna, a 23-year-old Kiev resident, wrote to me. “They saw the nightmare the ‘Berkut’ special forces are creating — how they mock the people whose rights and basic human values they are destroying.”

It’s daytime in New York as I write this — night in Kiev. Rain is falling here, and fire is rising there. A choir sings in the smoke, and the cities of my heart move on in opposite spheres.

Ukraine is a strange and divided place; the names of its cities are subject to revision, to argument. Two languages and countless iterations of national identity have always played off each other there, but the game has turned bitter and bloody this time.

When I speak to fellow Americans who have spent time in Ukraine, I hear words of love and powerlessness that echo my own.

“The powerlessness I feel must only be multiplied a million times for the people there,” Jeremy Borovitz, a former Peace Corps volunteer in Ukraine, told me via Facebook chat today. “They have decided to take their future in their own hands, violently if need be. I don’t agree with their choice, but part of me understands it.”

Borovitz opted to fast today and recite all of Psalms in support of the protesters. He lived in Ukraine for three years and now studies Torah in Jerusalem.

“I want to hope and to believe,” he wrote. “And I could not do it myself, so I turned to God.”