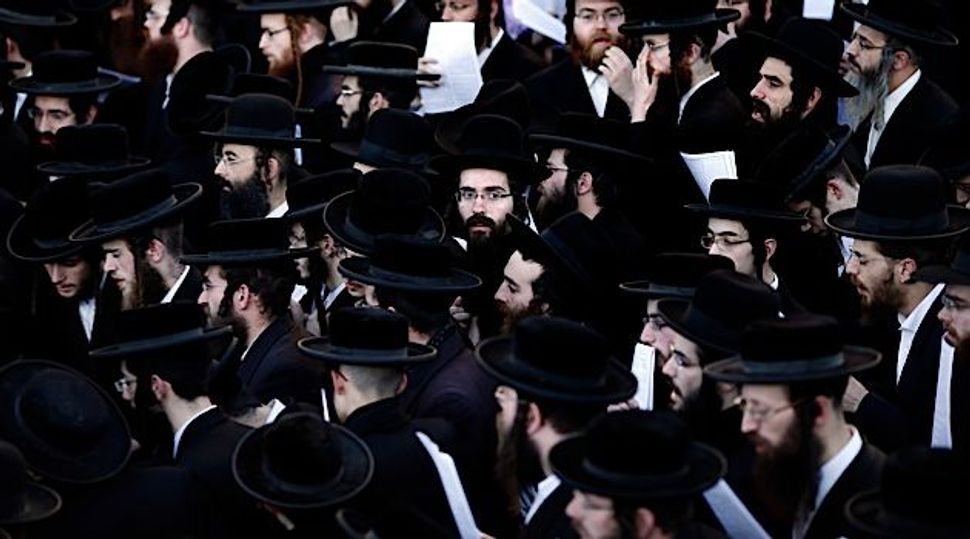 My religious group is routinely referred to by a pejorative.

That the name we are called is negative in only an indirect way doesn’t alter the fact that it is disparaging. It telegraphs a subconscious bias (and may well spawn from the same). I’m not quite Howard Beale-mad about the subtle slur, but I’m peeved all the same by its persistence.

Think about the word before the hyphen. “Ultra” might seem innocent enough, but what does it bring to mind in, say, domestic politics? Who, in other words, is an “ultra-conservative”? Pat Buchanan, I’d guess. Or maybe David Duke. And “ultra-liberal”? Well, to ultra-conservatives, President Obama probably fits the bill. To saner folks, though, well, the term wouldn’t fit anyone this side of socialism.

And there’s a good reason the prefix is used that way: It’s Latin for “beyond” or “extreme.” And that’s the problem. Are we you-know-whos really over-the-Jewish-top? Yes, we strive to observe the laws of the Torah, as mediated by the codes of Jewish law. And we eat only kosher food and do our best to observe the myriad religious laws of the Sabbath and the Jewish holidays. Orthodox modesty strictures, moreover, do set us (especially the women among us) apart from contemporary styles and norms. Those things, though, are part of every Orthodox Jew’s life. What makes us “ultra”?

To be sure, we “Haredim” (a less offensive term, from a Hebrew word that literally means “trembling” but implies meticulous care in practice and worship) are somewhat more insular than our “modern” (now there’s a silly identifier) or “open” (a downright insulting one — are the rest of us “closed”?) Orthodox brothers and sisters. We don’t generally own televisions, and we shun much of what passes for popular culture these days. But we’re hardly homogeneous, humorless or Luddites. Most of us are quite technology conversant, interact swimmingly with our non-Jewish co-workers and neighbors, and live peaceful, normal lives. And most of us speak fairly proper English, though Yiddishisms may occasionally sneak in. (But they do on television shows, too, I’m told.)

We tend to shun higher secular education, true, partly because our intellectual ideal lies in Talmud study rather than in the humanities or sciences, and partly because university life is far from consonant with our moral values. But we have our fair share of college grads, doctors, lawyers and scientists, not to mention tech wizards and academics.

The Hasidim among us dress in unusual garb — the famed long black coats and fur hats (at least on the Sabbath) that the “U-phrase” brings to many minds. But we are a variegated bunch. Many, if not most, of us dress in a manner that doesn’t stand out terribly starkly at all. And anyway, Americans of all sorts of religious and ethnic stripes dress individualistically. Do they get an “ultra” label, too?

Yes, while we are committed to Israel’s security, we don’t invest the political state with deep religious significance as some Orthodox Jews do, or consider everything its government does to be automatically right. Most non-Orthodox American Jews, though, last I checked, feel similarly.

Okay, I know, we are different. I don’t mean to challenge that sociological truism. But our differentness reflects only our fealty to the Judaism of the ages. That makes us Orthodox, not “ultra” anything.

What, then, to use in its place? Well, “Haredi” is now used by the Jewish Telegraphic Agency, the longstanding Jewish news service. That’s fine, although it’s still a puzzling word to many readers.

I have another suggestion. Considering that other Orthodox groups have self-identified with prefixes like “modern” or “open,” why can’t we Haredim just be, simply, “Orthodox”? Our beliefs and practices, after all, are those that most resemble those of our grandparents.

But, whatever alternative is adopted, “ultra” deserves to be jettisoned from media and discourse.

We Haredim aren’t looking for special treatment, or to be called by some name we just happen to prefer. We’re only seeking the mothballing of a pejorative.

We’re not asking anyone to be ultra-fair. Just fair will do.