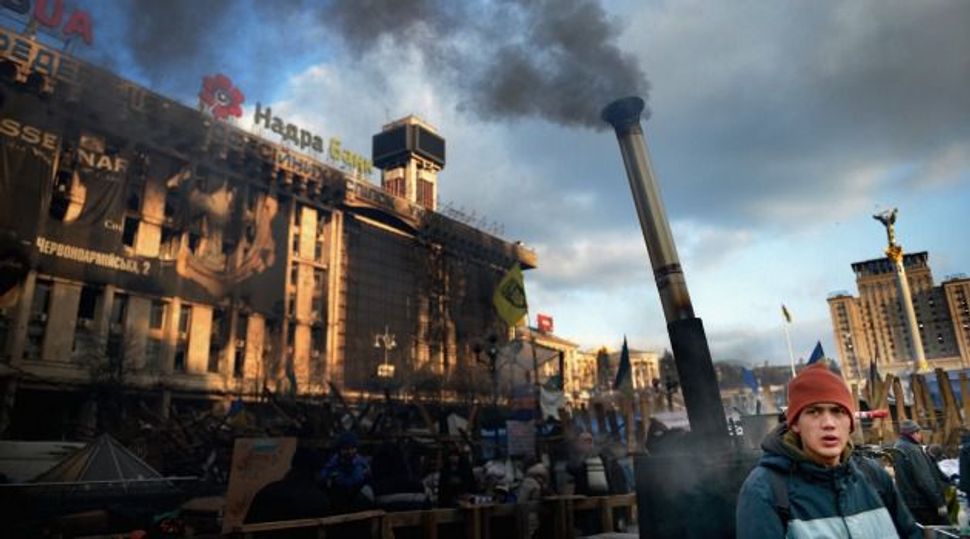 A man stands beside a military oven in Independence Square in Kiev, Ukraine. / Getty Images

Over the weekend, the Forward contacted Ukraine’s chief Reform rabbi, Alexander Dukhovny, to ask him about how he felt seeing the months of protests on Kiev’s central square lead to a clear resolution in the president’s ouster. This is his response.

Every citizen of Ukraine including Jews has his or her right to express their position. Those Jews who came to support the protestors were blamed that they were in collaboration with nationalists. Yes, there are some marginal groups in Ukraine whose views are anti-Semitic, and some of those people were among the protestors. However, the protestors’ main focus was on changing the corrupted presidency, government and unjust courts, and on getting rid of oligarchs.

At the moment, Ukraine’s Jewish communities and all Ukrainian people are confronting the uncertainty over our country’s political future. The protestors and many Ukrainian people throughout Ukraine want to establish in their country the Western/European standards of life, social security and a better future for their children. We want to introduce all the qualities of a person who “can dwell in God’s tent” (Psalm 15).

The international and local Jewish organizations all along called on the Ukrainian government to immediately stop the violence and engage in constructive, non-violent dialogue with the opposition.

The protests began because we, Ukrainians, wanted European values here in Ukraine; we wanted that the respect for human dignity should be a top priority.

Today, as we mourn over 100 protestors killed in the main square and rejoice that the president has finally been ousted, we look forward to Ukraine’s journey back to Europe! It’s been too long.