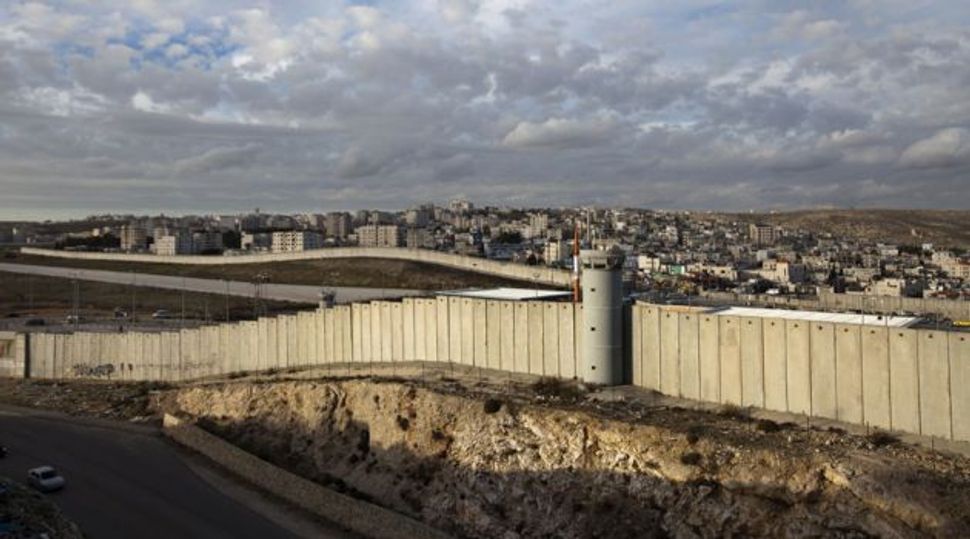 Separation: Support for the settlements is undermining any effort to create a Palestinian state. Image by Getty Images

Regular readers of my columns in this newspaper will perhaps have noticed that I’ve written very little about Israel in recent weeks. There’s a reason for that — to wit, my conviction that Israel’s occupation of the West Bank is so harmful to the country, to say nothing of its manifest harm to the Palestinian inhabitants of the West Bank, that there’s almost nothing to be added to the conversation.

Yes, I am fully (and painfully) aware that there are Israelis, some serving as key government ministers, who believe that all the land between the Jordan River and the Mediterranean Sea is Israel’s patrimony. But for a batch of reasons that by now are well known — the hope that Israel can be both democratic and Jewish (as vague as both those terms sometimes are) primary among them — and the consequent argument for a two-state solution to the chronic conflict between Jews and Palestinians — the question of patrimony recedes. Patrimony, after all, argues from yesterday, from what was, which may or may not be what makes sense today and tomorrow. A two-state solution makes sense, however many feathers are ruffled in the process. Any other solution endangers, even betrays, the Zionist enterprise.

That’s the big picture. But there are circumstances that call for attention to detail. So: The Israeli government last week approved new criteria for granting government assistance to local communities, and those new criteria would, so say government officials, add 35 West Bank settlements to the list of favored communities — to what’s called the “national priorities map.” And not just 35 plausible communities, near, say, existing towns, neighbors of settlement blocs that are expected to be retained by Israel as part of a peace settlement, but isolated communities.

If you want to know how much settlements beyond the Green Line cost Israel, the best source is Peace Now’s settlement department. No one knows more about settlements than the folks who staff it. Its key people — in particular, Hagit Ofran — know more than even the most senior civil servants, to say nothing of ministers. Relying on finance ministry data, the Peace Now people assert that the government transfers one billion shekels [henceforward NIS, for New Israeli Shekels] a year to settlements across the Green Line.

The one billion NIS figure describes only unique surplus expenditures for the settlements, not the costs of security and defense nor much of road construction. We get a more precise picture when we compare specific items within the government budget. Take, for a telling example, Ministry of Education expenditures for students within the Green Line and compare them to expenditures outside the Green Line: In 2010, the Ministry provided 4,915 NIS per student within Israel — and 8,034 per students in the settlements.

That gives you a sense of the preferential treatment accorded settlers. Or: Within Israel proper, 34% of the revenue of local authorities comes from the state; in the settlements, that figure rises to 57%. Or — the list of comparisons goes on and on, all in the same direction — the total state contribution to the budget of local authorities comes to 1,929 NIS per capita — but in the settlements, it is almost twice that, reaching 3,825 NIS.

All this is a form of madness, hastening the obsolescence of the idea of a two-state resolution. The settlements, even the remote ones (lately retroactively declared legal), count among their constituents not only their residents but also their relatives within the Green Line and the considerable number of Israelis for whom the Green Line itself has long-since ceased to be a meaningful boundary, has become a vestige of an earlier and more innocent era. Forget the religious argument for retaining control of the West Bank; forget the nationalist argument as well. Think politically: It would be hard bordering on impossible even for a prime minister who wanted to end the inherently corrosive occupation — nor is there any compelling evidence that the incumbent prime minister wants to end the occupation.

In July, August and September of 2011, the months of unprecedented social protest in Israel, much was made of the funding of settlements, at the expense, among other things, of affordable housing for young couples. But that resentment seems by now to have fizzled out. We are left with the ever-haunting question: Whither? Will the Israeli system, once remarkably egalitarian in theory and in practice, persist in its current and scandalous policies, policies that effectively endorse gross income inequality, or will it struggle towards a better way?

Part of the answer to that question depends on the government’s view of the settlement enterprise. And the signs in that regard are very far from encouraging.