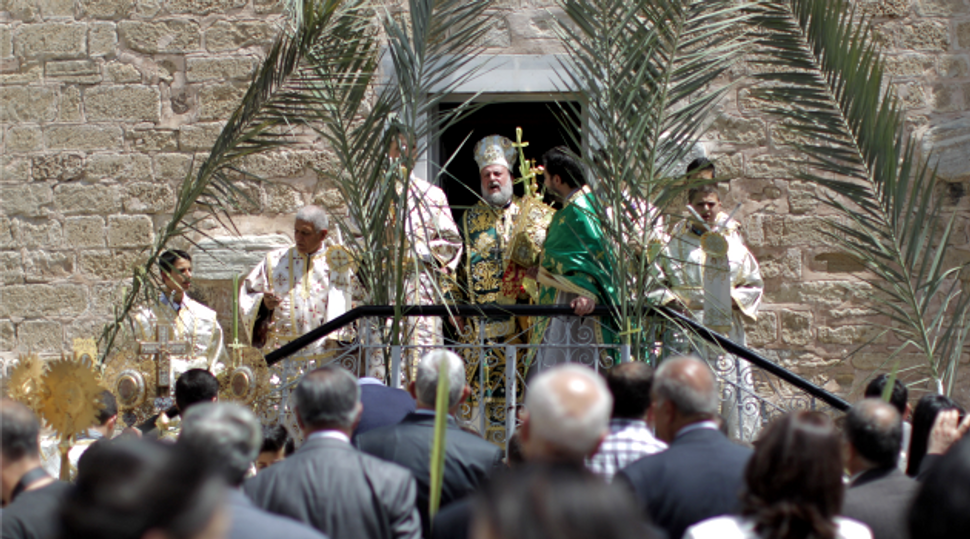 Last week the Knesset voted to force yet another division onto the Palestinian people.

Last Monday, by a vote of 31-6 (out of a total 120 Members of Knesset, so one has to wonder where everyone else was), Israel’s legislative body passed a law the ultimate goal of which is, according to its sponsor, “to distinguish between Muslim and Christian Arab citizens and to heighten involvement of Christians in Israeli society.”

Haaretz reported that in an earlier interview with Israeli daily Maariv, coalition whip and rising star on the Likud’s right flank MK Yariv Levin described his intention quite clearly:

My legislation will provide separate representation and separate attention to the Christian public, separate from the Muslim Arabs … This is a historic and important move that could help balance the State of Israel, and connect us and the Christians, and I’m being careful about not calling them Arabs because they aren’t Arabs.

So to understand: A population that is native to Arab Palestine, speaks Arabic, prays in Arabic, and has, throughout the history of the Israeli-Palestinian conflict, resisted occupation alongside its Muslim brothers and sisters — is not only not Palestinian, but not Arab. Because a Jewish member of Israel’s legislative body has decided that they’re not.

There is nothing innovative here, of course. Levin is simply following in the footsteps of many, many Israeli politicians who came before him. As Hillel Cohen notes simply in his 2010 book Good Arabs: “Israel created divisions among its minority communities by treating them differently.” It’s a tactic as old as human hatred, after all.

Unsurprisingly, however, Christian Palestinian-Israelis have taken issue with Levin’s blithe removal of their community from the “Arab” column.

MK Bassel Ghattas, a Christian from the northern town of Rameh, called Levin’s move “very dangerous,” adding, “the whole attitude is colonialist. It is the white man mentality of telling the natives what is good for them.”

Elias Hawila, a Christian Palestinian-Israeli medical student from Haifa, told a reporter that he “strongly objects to the government’s false notion of integrating the Christian population… Palestinians were always made up from different religions and all are an integral part of Palestinian society.” Israel’s Jewish left has also objected — as Meretz party chair Zehava Gal-On put it: “Perhaps we should also divide the Jewish population into Poles, Yemenites and Moroccans?”

In considering Levin’s actions, it’s important to remember that a handful of Palestinian-Israeli Christians do volunteer to serve in Israel’s armed forces; the new law is part of a broader effort to expand those numbers. Among those wearing the uniform, there is some support for the move: “It makes justice for Christian needs and solves discrimination against them within the Arab community that the state has falsely put them in for 65 years,” Lt. (res.) Shadi Halul, head of the Christian IDF Officers Forum, told the Times of Israel.

On the other hand, medical student Hawila called the effort to draft Christians “ludicrous.”

The Jewish people knows a little about such disagreements. Just ask Israel’s ultra-Orthodox community, currently protesting conscription in their tens of thousands. Or maybe ask American-Israeli Jews seeking to marry within their tradition in the Jewish state, only to be told that their rabbi isn’t the right kind of Jew.

Likewise, the Jewish people knows a little bit about being told by the outside world who is and is not to be counted among us.

But this is far more than a question of the rules by which we play the Nationalities Game. Whether or not Levin believes his own propaganda is an open question, that hardly matters — the consequence of turning his “Christian Arabs aren’t Arabs” ideology into law will be to drive yet another wedge into an already splintered people, making it that much more difficult for them to achieve equal rights within Israel proper, or a nation-state for their brothers and sisters in the Palestinian territories.

Which, I have reason to suspect, may be the real point.