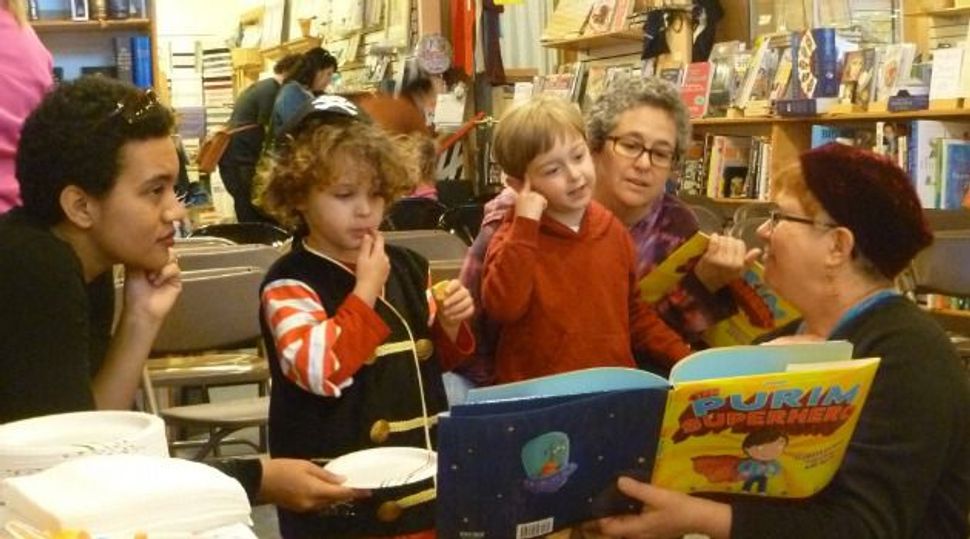 (JTA) — The line between respecting diverse religious beliefs and violating the rights and dignity of gays and lesbians is at the center of a debate between gay advocates and the PJ Library over a children’s picture book featuring a family with two fathers.

“The Purim Superhero,” by Elisabeth Kushner, was published by Kar-Ben Publishing last year after the manuscript won a contest for Jewish-themed books with LGBT characters sponsored by Keshet, a Jewish LGBT advocacy group. It’s about a boy who turns to his two fathers for advice after his Hebrew school classmates tell him he can’t dress up as an alien for Purim.

PJ Library, the popular program that distributes free Jewish children’s books in North America and beyond, selected it as one of its featured books this month, but as an extra book distributed only to those who requested it — which, apparently, many parents did: All 2,200 copies PJ had purchased were requested within 36 hours, according to an article in The Boston Globe.

On the PJ Library blog, a trustee of the Harold Grinspoon Foundation, the program’s founder and largest funder, explained that the decision to make “The Purim Superhero” by request only was made because, “like it or not, parents in our community have differing opinions about same-sex marriage and how or when it is discussed with children.”

The blog post likened distributing “The Purim Superhero” without parents first requesting it to visiting a family whose parents, “based on their sincerely held religious belief” have “made clear that a certain subject is taboo” and then bringing their child a gift that touches on the subject.

Idit Klein, executive director of Keshet, sees it differently and has told reporters that while offering the book was a “positive step,” she was also disappointed that it was by request only.

“I told [PJ Library] that this is demeaning to same-sex couples and their families — that there’s something so threatening and wrong about our families that children can only see them in a book if a parent requests it,” she told the Globe.

While the PJ Library blog post didn’t identify which members of the Jewish community might be offended by “The Purim Superhero,” the program was presumably concerned about offending Orthodox Jews, the only segment of the American Jewish community in which the traditional, homosexual-activity-is-wrong perspective remains strong.