3 Ways To Support Our Jewish Troops and Build Community 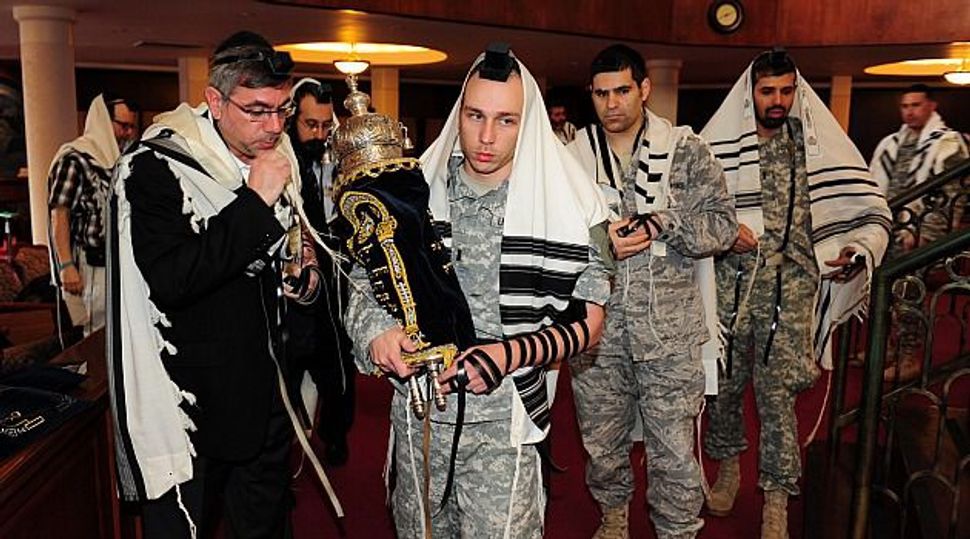 Our Own: Jewish military families need to feel like they have the community?s support.

In 2009, my husband, an active-duty naval officer, was deployed to Iraq for 12 months.

To prepare for a year without him, my children (then ages 6 and 4) and I moved from our military base in Washington State back into the home we owned in the Washington, D.C., area to be close to our extended family. I’d been away so long that I had very few friends there, and our children knew no one.

So when I got a flier publicizing the local YMCA’s offer of free membership to military families with a service member deployed, it seemed like a great way to get back to normal. The Y had swim lessons for the kids, a rock climbing gym, a fitness room — everything we needed to keep busy, make friends and pretend we were a regular family without a loved one in a war zone.

But I didn’t want to join the Y, I wanted to join our local Jewish community center. I’d grown up in a JCC and had a lot of happy memories. For me as well as for our kids, I wanted to re-establish our lives in the context of a Jewish community, and meet people through the classes, lectures and activities there. [(Research has shown that families who feel supported by their religious community experience reduced deployment-related stress.)][1]

So I called our local JCC and gave information about the program the Y offered, which had been established at the national level. Our JCC had nothing like it, and they were unwilling to match it. I asked if they could simply offer a military discount, since at that point we were unsure if we’d be living in the area for more than a year; like most military families, we were unsure of where we would land next, and did not know if there would be a Jewish community to plug into.

I didn’t want to commit to such an expensive membership if we were going to have to leave soon and start over somewhere else. (We held off on joining a synagogue for the same reason.) But the JCC said no to that, too. The JCC wasn’t being unfriendly, and the person I spoke to seemed to feel bad about it, but welcoming Jewish service members — a transient community — wasn’t a pressing concern.

So we joined the Y that year. We swam in its pool and climbed its rock wall and attended its events. After my husband returned from Iraq, we decided to stay in the district. If we’d had the option to join the JCC the year he was deployed, I’m sure we’d still be members now. But because of the way our needs were originally shrugged off, we never joined.

I think it’s a shame the JCC lost us, but it’s not just about us. Military families are a transient community, and Jewish institutions like JCCs work to cultivate permanent communities. It’s a worthy goal, but it doesn’t leave any room for Jewish military families whose tours of duty in one location vary from 15 months to three years. Given the relentless march of official studies and statistics proclaiming that Jews’ ties to Judaism are weakening, it seems to me that Jewish communities can’t afford to overlook anyone who is seeking them out.

It’s understandable that Jewish service members would fall under the radar of most active, affiliated Jews. When Jewish communities and book groups host me for a discussion of my memoir of being part of a military family, the No. 1 question is whether or not there are other Jews in the military like our family. There are. They write me long letters after reading my book, telling me that they, too, felt isolated and alone. There are 10,000 Jews in America’s military, according to the JWB Jewish Chaplains Council. It’s a small group by military standards, but it’s a significant number of Jews for the mainstream Jewish community to unintentionally write off.

Jewish military families like mine are often stationed in remote areas far from mainstream Jewish institutions, but there are ways to reach out and translate “Thank you for your service” into something tangible. Jewish groups should consider ways to acknowledge the unique needs of Jewish military families and welcome those families, even if it’s only for a short time. Here are a few ways to do that:

1. The JCC Association at the national level should offer a different membership structure to active-duty service members and to veterans of the Iraq and Afghanistan conflicts and their immediate family members. Eight individual JCCs (out of 350) already do this but to make a statement and reach a much larger audience, it needs to be a national initiative.

2. Jewish cultural institutions and synagogues near military bases should reach out to the base chaplain’s office to connect with Jewish service members, offer to send speakers to the community and make synagogue services, including High Holy Days tickets, accessible without a membership.

3. Hillel should make outreach to Jewish military personnel as one of its core activities. After all, Hillel’s demographic includes college students ages 18–22; nearly one-half (49.3%) of active-duty enlisted personnel are 25 years old or younger, with the majority of those in the officer corps in their mid-30s. The age range is close, the extracurricular interests are aligned, and an effort to send appreciative words to Jewish service members or to show gratitude through care packages would be very meaningful. It would expose Jewish college students to a wider variety of Jewish experience and prepare future Jewish communal leaders for a better understanding of Jews in the military, so perhaps the next generation won’t feel so invisible.

Throughout our many years volunteering on behalf of Jewish colleagues in the military, my husband and I have seen firsthand that many individuals and organizations are excited about American Jewish service members’ contributions to the nation. People are quick to mention a child, in-law or cousin on active duty. Many have even visited the National Museum of American Jewish Military History, one of the few Jewish organizations recognizing that American Jews still serve honorably, and in ways that make a difference to the country. And a lot of people have sweet stories of a grandfather or great-uncle who marched in parades with the Jewish War Veterans.

The vast majority of people have open ears and an open heart when the subject of Jews in the military happens to come up. But it’s time for Jewish service members to stop having to ask for one-off favors and special treatment tailored to their unique needs. There’s plenty of goodwill. Now, Jewish organizations at the national level need the will to do right by the families who serve, and they can do this by including them in the institutions of communal life.

Alison Buckholtz is the author of “Standing By: The Making of an American Military Family in a Time of War” (Tarcher/Penguin, 2009).

[1]: Research has shown that families who feel supported by their religious community experience reduced deployment-related stress.

3 Ways To Support Our Jewish Troops and Build Community