The ‘Draft Dodgers’ in Our Midst 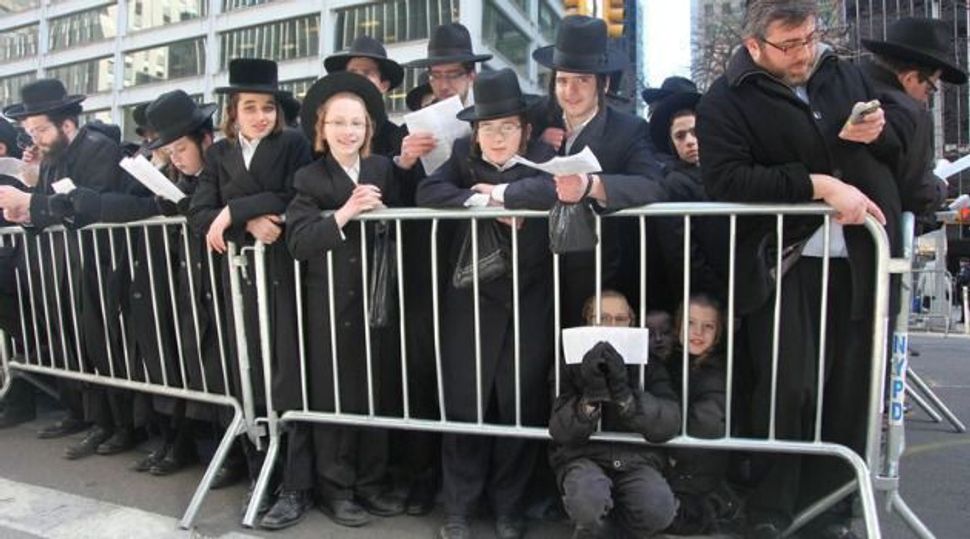 When 50,000 ultra-Orthodox Jews flooded the streets of lower Manhattan this past Sunday, clogging the alleyways that curl through the Financial District with black hats and single-minded devotion, they did more than recite psalms in protest at what is now a new law in Israel. They introduced a new challenge to the Israel conversation at home.

The demonstration here was hastily arranged as a supportive gesture to the ultra-Orthodox, or Haredi, Jews in Israel who are strongly resisting a new law that abolishes their decades-old exemption from compulsory military service. It’s an old argument, as old as the modern state of Israel, given fresh impetus by changing demographics and growing public resentment.

Until Sunday, the fight over who fights for Israel has been, well, an Israeli issue ever since David Ben-Gurion agreed to exempt 400 Haredi men from the military draft so that they could study full-time in yeshivas — a deal he struck to secure Haredi support for the fledging state. The argument made by the chief rabbi at the time was both emotional and tactical: after the ranks of the religious were decimated by the Holocaust, the new state needed to keep a few hundred scholars safe from harm.

Now Haredim make up about 10% of Israel’s population; two-thirds of the men study full-time and do not work. Since employment and military service are tied in Israel, the absence of the Haredim from both the economic and defense sectors led to a public backlash and the election of a new government in 2012 that made compulsory military service its top priority.

The closer a universal draft gets — even with lots of exemptions and loopholes — the more frantic the opposition in Israel. And now in the United States.

Agudath Israel of America, the ultra-Orthodox umbrella group, helped organize Sunday’s massive rally, marking the first time this influential advocacy organization took a public stand on the issue. Chabad-Lubavitch, a popular movement within ultra-Orthodoxy, did not formally endorse the demonstration and does have close ties to the military in Israel. But some Chabad rabbis — including the prominent head of the Crown Heights Beis Din — urged followers to attend the rally.

So let’s understand what is happening here. A small but significant portion of American Jews (the Pew Research Center study puts the ultra-Orthodox at 7% of the total population, with birthrates far outstripping other denominations) is outright rejecting the need to support Israel’s military.

Until now, Agudah’s advocacy for issues ranging from dealing with child sexual abuse claims to restricting circumcision rituals has largely focused on the particular needs of its very particular community. But this draft issue has far broader resonance.

Zionist sentiment in America is inextricably tied to maintaining a strong Israeli military defense. Intense lobbying goes into ensuring continued American financial support, the most generous to any nation on earth. The Friends of the Israel Defense Forces, a powerhouse of fundraising, just raked in $20 million at its annual New York gala last night.

But the Haredim excuse themselves from all that. When asked for an explanation, Rabbi Avi Shafran, Agudah’s spokesman, offered this in an email to the Forward:

“The state and its people are defended by the military…and by the Torah-study and dedication of Jews who willingly endure poverty and discrimination in order to remain steeped in what they believe underlies the security of Jews. Just as the military consists of foot soldiers and strategists… so do Torah-students, in the view of haredim, play an essential role in the security of the nation.”

How is this stance qualitatively different from the “draft dodgers” on the left who refuse to serve in the military to protest the continued Israeli occupation of Palestinian territories? They believe they are serving Israel’s long-term security interests, but they are pilloried by mainstream American Jewry for their anti-military stand.

Should the Haredim be censored in the same way?

Of all people, Morton Klein, president of the hard-line Zionist Organization of America, believes so. “It is immoral, even obscene, for people not to join the IDF. It’s a matter of survival. It’s not a political question, it’s an existential issue,” he said in an interview. (Klein said he was expressing his personal views and not ZOA policy.)

And, he said, “If Agudah wanted to come to ZOA and talk about why the Haredim should not serve, I would not want to give them a podium.”

Will other Jewish organizations, so willing to draw red lines when it comes to perceived anti-Israel speech, do the same?

We advocate the opposite – the more engagement, the better. But now, when the organized Jewish community frets about the anti-Israel sentiment in its midst, it cannot just look to the left. It has to look the other way, too.

Ten years after the Haredi military exemption was enacted, in November 1958, Ben-Gurion tried to roll it back. Clearly, he failed. But his words then remain a powerful indictment of this unfair, unjust policy. As he wrote:

“This is, first and foremost, a great moral issue: whether it is fitting that the son of one mother is killed in defence [sic] of the homeland, and another mother’s son sits in his room and studies in safety, while most of the young people of Israel are risking their lives.”

The ‘Draft Dodgers’ in Our Midst