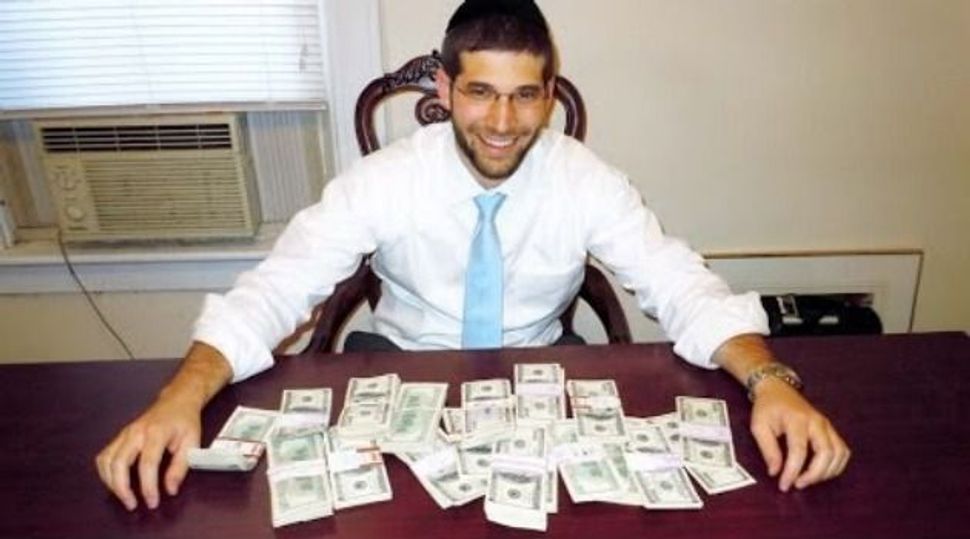 When Rabbi Noach Muroff needed a desk, he looked to Craigslist for a good deal. He got way more than he bargained for.

The desk, purchased for $150 dollars, turned out to be hiding $98,000 stuffed in a ShopRite plastic bag, that had fallen behind the file cabinet.

And Muroff gave it all back.

Muroff bought the desk last September, right before Rosh Hashanah. When it wouldn’t fit through the door, he and his wife had to disassemble it. That’s when they spotted a shopping bag full of a cash inheritance that the previous owner assumed had been lost somewhere in her home.

The ninth grade teacher at the Yeshiva New Haven Shul looked at his wife and, despite the fact that it was nearly midnight, dialed the original owner’s number. The money was returned the next day. According to Muroff, he didn’t sleep that night knowing that sum was in the house.

“Our jaws kind of just hit the floor. We were in total shock and disbelief. This kind of thing only happens in the movies,” Muroff said, laughing when telling me the story.

When Muroff’s story went viral in November, I immediately made a note of it for our Most Inspiring Rabbis in America section. Someone has to nominate this guy, I thought. But no one did.

So, on behalf of all those who expressed their awe and admiration for Muroff’s honesty, I am nominating him as the rabbi who most inspires me.

In the months since Muroff’s story made the headlines, the rabbi has received emails and phone calls from strangers telling him how much his story meant to them.

A father told him about his son who bought a camera on Amazon and received one worth three times what he had paid. He wrote the company a letter saying he was Jewish and was raised to be honest and would send back the camera. The son cited Muroff as his inspiration.

A man from Idaho wrote to him saying he had had this perception of Jews as greedy people and that Muroff’s integrity had made him reconsider.

Without fail, Muroff is asked what went through his head when he decided to give up almost $100,000. According to him, it was a decision that took less than a minute to make.

“Both my wife and I were raised as Orthodox Jews,” he told me. “We feel strongly that honesty is always the way to go, we’re commanded to do so in the Torah; and in addition to that, the idea of putting yourself in the other person’s shoes: How would you feel if you were the one losing the money?

“My father in a million years would never have touched the money.”

Muroff received a gift of $3,500 from the original owner (plus the $150 he paid for the desk). But the words that came with it sum up his real value:

“Dear Noah, I cannot thank you enough for your honesty and integrity. I do not think there are too many people in this world that would have done what you did by calling me. I do like to believe that there are still good people left in this crazy world we live in. You certainly are one of them.”