If a Palestinian Did This, He’d Be Dead 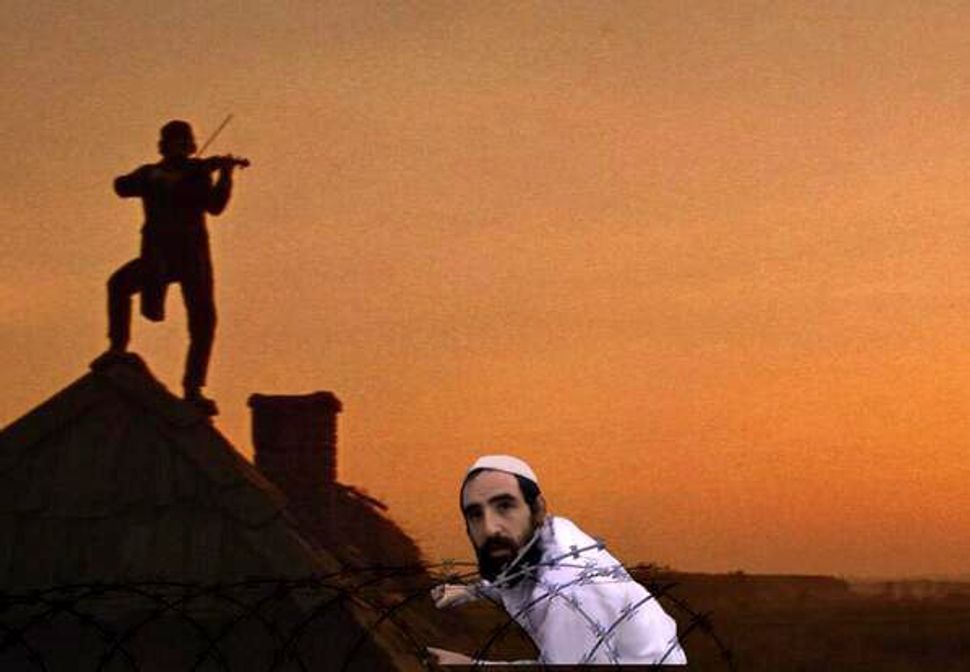 In an imagined juxtaposition, the Hebron settler meets Fiddler on the Roof. / Richard Goldwasser

If you’re online and follow news out of Israel, you’ve probably already seen or at least heard of that wild-and-crazy video of a Hebron settler try to steal a Palestinian flag off a Palestinian roof.

The guy gets caught on some barbed wire and then — even as his compatriots shout abuse (“you son of a whore!”) at Shadi Sidr, the man who lives in the house, and even as Sidr tries to help free the settler from his predicament (while also attempting to reassure onlookers: “It’s okay, don’t worry!”) — the settler explains, with almost otherworldly calm, that in fact “This roof, this is my roof. This is all mine. The whole country is mine. The whole state is mine.” Soon after, soldiers show up and threaten not the settler but the homeowner with arrest, demanding that he take down his flag. Crazy, right? Wild!

UPDATE: Palestinian agrees to take down flag after Israelis agree to release his neighbor

Here’s what nobody seems to have noticed though: If the shoe had been on the other foot — that is to say: If one of Hebron’s 170,000 Palestinians had tried to steal one of the many, many Israeli flags belonging to any of the 500-some-odd settlers whose presence dictates every single detail of Hebronian life — that Palestinian would have been shot. That Palestinian would be dead.

I often pose rhetorical questions in my writing like “Hey, what if Palestinian security forces had shot an Israeli judge? What would happen then?” or “Hmm, what if Palestinian security forces had forcibly taken Jews from their homes in Jerusalem? What would Israel have done?” — and then I leave the question hanging, because while my intent is clear, it’s kind of hard to know exactly what would happen, right? If my grandmother had wheels, she’d be a bus, et cetera.

But you know what? In this case, I know.

Palestinians are shot by Israeli forces in and around Hebron fairly regularly. Some of them may or may not have been attempting to attack the soldiers who killed them; some may or may not have thrown stones. Others most certainly were doing nothing of the kind. Like the woman who was killed while walking to college. Or the little boy whose eye was shot out as he held his mom’s hand in the car on the way home. Or the elderly man who was killed as he slept in his bed.

You don’t have to just take my word on this, by the way. You can ask the Israeli combat soldiers who served in Hebron and elsewhere on the West Bank and were saw so haunted by what they saw and did that they went public. Palestinian life is pretty cheap under occupation.

So, yeah. The video of the man in the big white kippah declaring his ownership of the roof from which he dangles is, in fact, wild-and-crazy — and it also serves as a remarkable metaphor for the entire occupation enterprise: The state trapped, through its own devices, in an increasingly tenuous situation, counting on the military to keep it safe, blithely declaring that everything the eye can see belongs to Israel and Israel alone, even as it hangs inches from disaster, its government the Greek chorus congregated below, vituperative in its dedication to the doomed enterprise.

Go ahead and watch, tweet, and Facebook that video, but it’s a good idea to also stop for a moment to consider: What if the guy had been Palestinian?

If a Palestinian Did This, He’d Be Dead