Of Purim and St. Paddy’s, Land, Rebellion and Booze 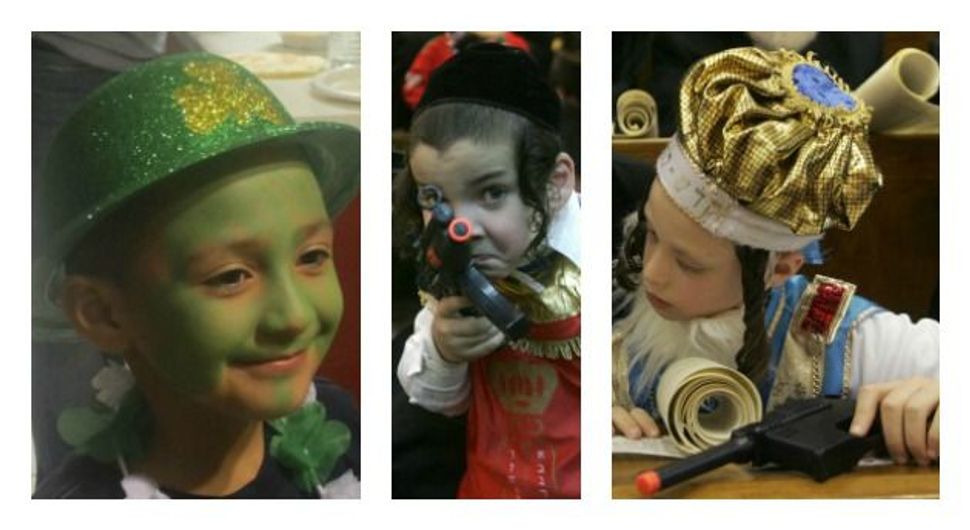 Purim falls this year on March 16, and St. Patrick’s Day on March 17. It appears that Jews will be nursing their hangovers on Monday morning just as the Irish are getting to work on theirs. What’s significant, year after year, is that the two peoples that did so much to define modern America have these overlapping holidays characterized by intoxication.

I wrote the following Op-Ed piece in the Los Angeles Times exactly 30 years ago, on March 16, 1984, when Purim and St. Patrick’s Day both fell on the 17th. I was reflecting on the holidays’ many parallels and echoes: drinking, partitioned homelands, revived languages, rebellion against the Brits.

As I re-read it now, I’m struck by how much has changed, how much no longer applies. Besides the passing of the generations that witnessed liberation, I sense a full generation later that Ireland has dealt with the temptations of religious passion more temperately than Israel has. Ireland resolved to put its religio-territorial war behind it and get on with things, while Israel’s territorial wars have become ever more religion-driven and seem increasingly insoluble.

It’s striking, too, how the revolutionary impulse has spread beyond the realm of teenage nothing-to-lose bravado to a new world of middle-class, middle-age families taking to the streets worldwide.

Most of all, I’d sort of forgotten how hopeful things used to seem. Anyhow, here it is (with apologies for the headline—I didn’t write it):

Begorrah and Shalom! Jews, Irish Should Celebrate as One

St. Patrick’s Day and Purim both fall on March 17 this year, a coincidence that merits some reflection.

St. Patrick’s Day honors the man who brought Christianity to Ireland a millennium and a half ago. Over the years the day has evolved into a symbol of the eternal spirit of Erin, and many of her sons celebrate, at home and throughout their diaspora, by imbibing.

Purim is quite different in origin. The holiday commemorates the events recounted in the Book of Esther, when Persian Jews were threatened with mass murder under the wicked prime minister, Haman. As the story goes, the massacre was averted through the political maneuvers of Mordecai the Jew and his niece Esther, who managed to turn the tables and slaughter their enemies. The Talmud recommends that Jews commemorate their deliverance each year by getting so drunk that they can’t tell the difference between “blessed be Mordecai” and “cursed be Haman.”

Liquor and carnage. Diaspora yearnings and partitioned homelands. President Chaim Herzog of Israel is Dublin-born and so is Mayor Gerald Y. Goldberg of Cork. But the spiritual bond between the Jews and the Irish runs deeper than that. There also is a common understanding of what it means to struggle to hold onto your identity, to glory in it, to want to wipe that condescending smirk off the faces of neighbors and oppressors.

An old family friend, who today is a distinguished Israeli diplomat, used to tell me romantic tales of growing up in Belfast in the 1930s. It seems that there were two underground movements in the city in those days, the Labor Zionists and the Irish Republicans. Both groups were hounded by British soldiers. They shared safe-houses, weapons and dreams of revenge and bloody glory. They were all teen-agers.

Let’s face it—it’s the adolescents who make revolutions. It’s the teen-age boys in their first flush of manhood, unencumbered by wisdom or responsibility—boys with nothing to lose who are the first to throw the bombs and raise the flag of rebellion. In the adolescent mind, freedom and honor are indivisible and dearer than life.

Thanks in part to all those angry young men, the Jews and the Irish have made great strides in this century. Two nations that once lived in shadows are now represented in world councils. Ancient languages have been revived, ancient peoples have reentered history. Every Irishman and every Israeli who was alive before independence remembers how it felt to wake up one day and know, suddenly, that you come from somewhere.

Much remains to be done in both countries. The fate of the Irish language still hangs in the balance. Israel has yet to win acceptance from her neighbors. Both countries wrestle with painful decisions about the role of religion in national life. Both countries are wracked by debate over partition—whether or not to accept territorial compromise, to settle for a dream only partly fulfilled.

But the basic revolution has been won for both Ireland and Israel. The flags fly. The states have achieved sovereignty, the people have won the freedom to decide their destinies. So much has been gained that there is a great deal to lose. Now it is up to wise leadership to pursue destiny on a road that may require compromise.

The parallel is imperfect. Scholars will see a comparison between apples and oranges. The issues are not the sames, the wars have different causes, and yet … Sure, it’s only the Purim musings of a cab driver from Queens. But isn’t it grand that we have days when we can take a drink to think our silly thoughts, and another drink to forget the pain, and another drink for the devil of it, and be blessed for our drinking in the bargain?

So on Saturday night let’s all raise a glass to freedom. We’ll drink to Mordecai the Jew and O’Connell the Liberator, to Connolly and Trumpeldor and DeValera and Ben-Gurion, to all the brave and bloodied dreamers who dared to shake a fist at tyranny for land and liberty.

And then, come Sunday morning, let’s brace ourselves with a cup of strong coffee and get on with, the work of the real world.

Of Purim and St. Paddy’s, Land, Rebellion and Booze