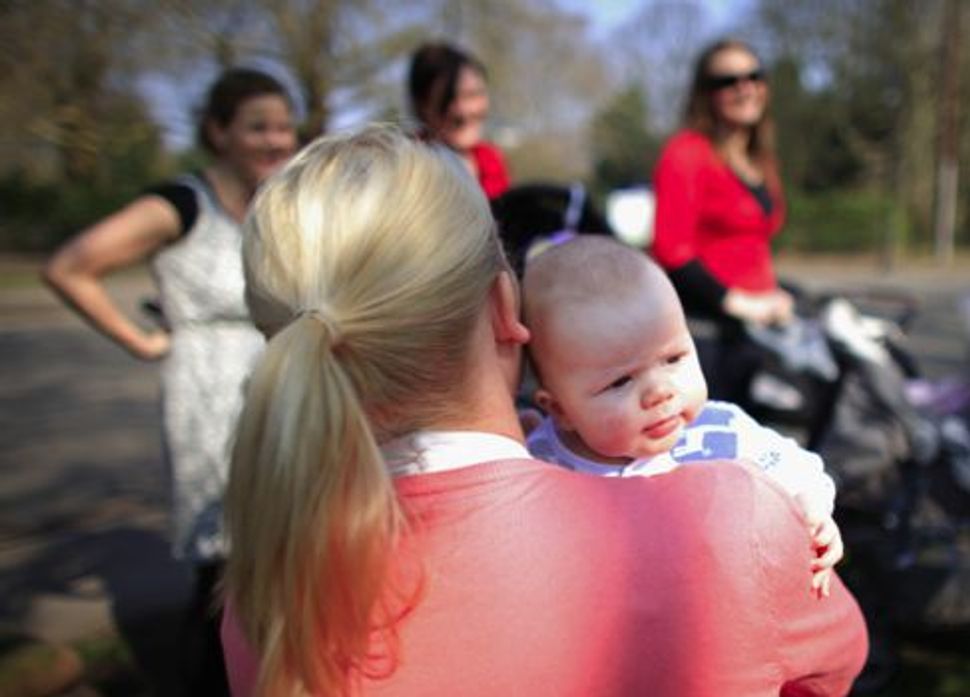 Elusive Motherhood: When a baby is not in your future. Image by Getty Images

‘Would you date a non-Jewish guy?” Sarah asked over dinner a few weeks ago. She’d started dating non-Jewish men in her late 30s.

“I understand,” Sarah said. “I always thought I would, too. But I’m 41 and I just want to give it everything I’ve got. I can’t imagine not having kids.”

I understand that, too. I had always expected to marry and be a mother. From the time I was a little girl, I imagined my own family Sabbath dinners, a daughter to recite the four questions at our Passover Seders and a son to light his own handmade menorah. For me, marriage, children and a Jewish home were intertwined.

Jewish women not only carry the Jewish babies, but also the Jewish guilt for ensuring that those babies have two Jewish parents. But today, so many Jewish women remain single and childless as our fertile years wane.

Some assume we have eschewed marriage and children for our careers, or because we are too picky or too naive about our fertility. And yet, the desire among Americans to be married and have children has not changed in a generation. A 2013 Gallup survey reports that 90% of all American adults under 40 are parents or want and expect to be parents. Of those, 50% actually are parents and 40% expect to be.

Those of us among that 40% who are now in our 30s and 40s, who expected to have the social, economic and political equality our mothers didn’t have and the husband and children they did and yet remain single and childless, are what I’ve called the Otherhood.

This rising trend is the most overlooked and underappreciated social issue of our time. And among Jews, the trend is even greater.

Like most college-educated women — and Jewish women are likely to have a four-year college degree — we are more likely to marry later and have children later, but not necessarily by choice. Our singlehood and childlessness is a not a badge of feminist honor. While women of the Otherhood are more likely to be in the top third of income earners, based on a 2012 report from the Centers for Disease Control and Prevention, the idea that we are so-called “career women” who choose work over love, as if we have the choice not to work, is a myth. Even Betty Friedan, the (Jewish) mother of the modern feminist movement, the author of “The Feminine Mystique,” wanted women to ask for more than marriage and motherhood, not to eschew them altogether.

Our desire not to settle for a lesser love is sometimes taken as not understanding what really matters in a relationship. “There’s no such thing as Prince Charming” some admonish, as if well-educated, sophisticated women are waiting for men in tights. And some believe our involuntary singlehood is somehow proof of a lack of desire to be mothers: “Don’t you want children? You’d better hurry up!” they warn, as if we can control when we find love.

And so every Sabbath dinner for one, every Passover Seder as single women, every Hanukkah lighting the menorah without our children by our side is a painful reminder of circumstances beyond our control. Our circumstantial infertility, the grief we feel over of our inability to have children because we want to have children with the man we love, is unacknowledged. It’s as if only married couples who are coping with the pain of infertility have the right to grieve over their childlessness.

Perhaps like my friend Sarah, some Jewish women are doing their best to find a Jewish man with whom they want to share their life — and who is ready, willing and able to be married while she is still at her most fertile. But then, before the window closes on her fertility, he chooses to marry a non-Jew he loves in order to have kids.

This may be a growing trend. When I asked Liga Plaveniece at the Pew Research Center for the ratio of intermarriage from women to men, I had expected many more men to be intermarried, as it was reported in the 2000–2001 National Jewish Population Survey. But Plaveniece told me that the opposite was true: “Jewish women are slightly more likely to be intermarried than Jewish men. Among married Jewish women, 47% are married to a non-Jewish spouse. Among married Jewish men, 41% are married to a non-Jewish spouse.”

Some Jewish women make the choice to date and marry non-Jewish men at late fertile age to find love — with a Jew or non-Jew — in order to move forward toward motherhood. And while some women decide to have a child on their own, through sperm donation before the end of fertility, or through adoption, they are still among a small minority — a minority I champion in my recent book. Still, most Jewish women of the Otherhood hedge their bets waiting for love before motherhood. It’s not always a bet they will win.

While I never expected to remain single and childless in my 40s, I do find myself to be remarkably happy with a glorious life of other things. It’s not the life I expected, nor is it the life that was expected of me or for me. However, there is one thing I know for sure: Love is ahead of me. And for that very reason, I will never look back.