Making Ritual for Ourselves 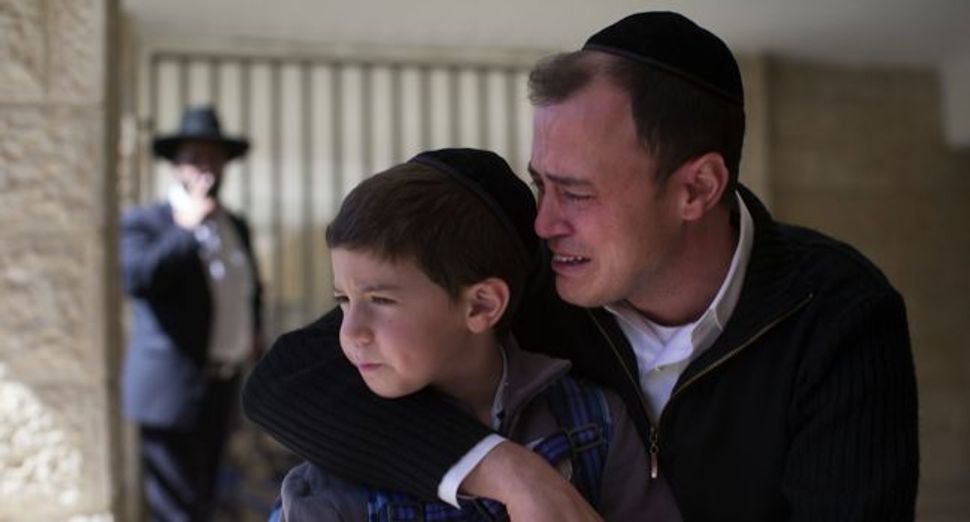 Take the ritual of sitting shiva, for example. It is a cluster of touching and cryptic customs. Try parsing those customs and you will find yourself at a loss for words — or, if you’ve bothered to read the “explanatory” literature, inundated by a surfeit of words, this interpretation being run over by that, one expanding while another contracts, many shared in somewhat different form with other cultures — precisely because wherever organized mourning takes place the death that is being mourned raises the same existential question: Why? There being no adequate answer to that question, not here and now, not anywhere, not ever, every culture is challenged to develop ways to help the mourners cope with their sense of displacement.

And a related question: Why did I react with distaste when I heard of a wedding in the Hamptons of an Indian man and an Irish woman, a wedding in which the groom arrived on horseback? Why do I resist the homegrown rituals that people devise for themselves, a poem from here and a prayer from there and a song from another place? I, for whom the traditional Jewish custom whereby the bride walks seven times around her groom is an obnoxious assertion of male supremacy? How do I choose, and what do I urge upon others? Can it really be that anything goes? But if it cannot be, who is to say, and on what basis, that this meets the standard and that does not?

And in the end, what does it matter? After all, what endures, what really counts, are the existential dilemmas, the fears and the yearnings that so deeply and so universally mark our species. Let people find comfort where they can, and bless the ones who are lucky enough or clever enough or wise enough to find it.

Except that human genius has produced complex systems of response, systems that speak not only to the feeble among us but to the strong, the rational, the autonomous. Those systems can pass no test of “validity.” They are not about truth; they are about utility: Do they work?

Which, finally, brings me to the matter of content. For it is not the case that the sole purpose of such systems is to offer comfort to the bereaved, and so forth. They are systems not only of solace but also of challenge. Or: These systems (religious systems, in the main) come not to answer questions that otherwise cannot be answered so much as they come to raise questions that might otherwise be neglected, overlooked, forgotten — the great and enduring ethical questions that quite properly haunt us.

Such questions are the home key of Judaism. They offer all the content I desire. That is what makes the stories that we have handed down from generation to generation more than once-upon a time stories. And the fact that Baruch Goldstein, the murderer (can one say “massacerer”?) of Hebron or Yigal Amir, Yitzhak Rabin’s murderer, or Bernie Madoff or the lesser but all too common miscreants we have encountered, didn’t “get it,” thought that the surface features were the whole of it, doesn’t mean a thing, except that we have not been so successful as we would like. Who has?

But then I am carried away, transported, by Brahms’s First and Beethoven’s Ninth, both for the same reason: They both tell stories of struggle, dialectical stories with only hints of the day that is yet to come, a fugitive phrase here or there, until in their last movements they come finally to the triumphant major key and a melody that promises peace and freedom, at last. Especially in the Beethoven, there are terrible and terrifying dissonances along the way, reminders of how far we can wander away from home key, or from any key for that matter. There is war, there is famine, there is pestilence; there is the grieving mother next door and there are the homeless children around the corner and there are the victims of abuse everywhere, and yet there is a home key, and it calls, and we know, we know, we will get there. Not, mind you, the literal “we”; no such luck. The arc of the moral universe, Martin Luther King used to say, is long — but it bends towards justice.

Now, plainly, you don’t have to be Jewish to lose yourself in Beethoven’s final optimism, And if you happen to know anything about Beethoven’s own personal life — not just his deafness but his depression and his moodiness and all the rest — the mystery deepens: How did he know?

It is one thing to say that there are no longer any authoritative standards by which to tell the wheat from the chaff, that only time will tell. But it is not as if time happens in one sphere and we in another. Our reaction to the forms that Judaism takes has at least some influence over whether they “take” or are soon discarded. None can say which aspects of the Jewish past will make it into the next phase of Jewish history, but we are not merely passive subjects of that history; we are, to some degree, its authors. Which aspects end up making it is in some modest way a function of which aspects we choose to emphasize, to preach, to affirm.

Making Ritual for Ourselves