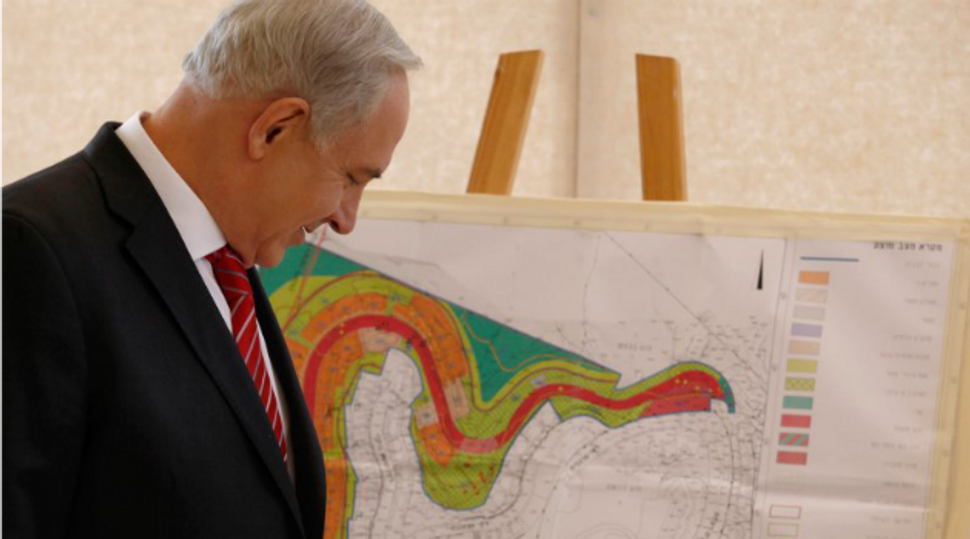 Last week we learned that Israel’s government is advancing plans for another 2,269 settler homes in the West Bank and East Jerusalem; 144 are planned for the Jerusalem settlement neighborhood of Har Homa.

Discussion surrounding the Israeli-Palestinian conflict tends to focus on minutiae, or the broad sweep of an entire century; our frames of reference rarely allow us to discern patterns within the broader picture. In geopolitics, however, the patterns found in any nation’s behavior are often determinative – such as, for instance, the pattern we find expressed in Har Homa.

Har Homa is located in what is inaccurately called (by everyone, including me) “East Jerusalem.” The inaccuracy becomes clear as soon as you look at a map: Har Homa is actually south of the Green Line that demarcates internationally recognized Israel from the West Bank; it’s southwest of the Old City. Much of the Palestinian land that Israel has annexed in its decades-long push to turn what was once tiny Jewish Jerusalem into a behemoth of land and resources is east of the historically Jewish part of the city, but much of it is not. Another well-known settlement neighborhood, Pisgat Ze’ev, is to the north, as is French Hill. A more accurate term would be “Palestinian Jerusalem” or, in the case of Har Homa (which was never any part of anyone’s Jerusalem) “the West Bank.”

Every settlement is a political statement – “here we sit, we will not be moved” – but Har Homa’s is particularly blunt: Established in 1997, four years after the Oslo Accords were signed, Israel’s then-Prime Minister was very clear about Har Homa’s purpose: “The battle for Jerusalem has begun. We are now in the thick of it, and I do not intend to lose.” Who was that Prime Minister? Benjamin Netanyahu.

In the opinion of most Jewish Israelis, Jerusalem is not merely a piece of disputed territory and Har Homa is not regarded as a new settlement.

…Har Homa would not be the first Jewish suburb to be built along the perimeter of Jerusalem, and, in fact, one by one, such suburbs have been set up around the nucleus of pre-1967 Jerusalem, despite the bitter protests of the Arabs and the criticism of the international community.

Even these brief comments are riddled with the kind of linguistic gymnastics that have always marked official Israel’s presentation of the occupation, starting with Netanyahu’s use of the word “Jerusalem” – Har Homa was never part of Jerusalem. Ever.

Then there’s the word “suburb” – calling Har Homa a “suburb” among many other “suburbs” erases the fact that the land on which each stands is Palestinian, on the non-Israeli side of the internationally recognized border. And all those protests and criticism? Those were appeals to international law and the very accords signed by the Israeli government not four years prior.

The effect of Har Homa was precisely what Netanyahu sought: To disrupt the Oslo process. Having campaigned for the premiership on “reduc[ing] the price that Israel would have to pay,” but promising to “honor” the agreement “if Arafat honored it,” he set out to gut the Accords of substance and provoke a Palestinian response. Backed into a corner over Har Homa, the Palestinians obliged.

The implementation of the Accords came grinding to a halt and in October 1998, President Clinton was forced to expend huge reserves of diplomatic energy and international capital on convening the Wye River Talks.

The agreement that emerged was a mess of compromises over percentages of West Bank land, promises to prevent terror and seize illegal weapons, and Bibi even got Arafat to – now, follow closely – reaffirm a letter that Arafat had sent to Clinton earlier in the year, in which he’d reconfirmed the PLO’s 1996 abrogation of the parts of the Palestinian National Charter that had called for Israel’s destruction. That is: Bibi got Arafat to reconfirm his reconfirmation. And still nothing came of Wye, because Netanyahu was able to accuse Arafat of not keeping his commitments without anyone calling him on his own bad faith.

Cut to 2014. Netanyahu’s been Prime Minister again for several years. Never committed to the kind of genuine, durable two-state peace envisioned in the Oslo Accords, he’s continued to gut whatever’s left of the peace process at every turn, largely by expanding settlements at a breakneck pace — despite Israel’s own commitment, in the 2003 Road Map, to freeze all construction — but playing along just enough to keep the White House off his back. As Secretary of State John Kerry traveled to the region nearly a dozen times in 2013, the pace of settlement construction doubled.

Along comes last week’s revelation of yet more building across the Green Line, and the Jerusalem Municipality has taken umbrage that anyone would question Israel’s right to build in “Jerusalem.” As the Jerusalem Post reported:

[The municipality] categorically dismissed assertions that the move was meant as a provocation during already uneasy US-brokered peace negotiations, and noted that the land had been privately owned for years.

…The government has long said that… Har Homa will not be exchanged in any deal with the PLO.

To reiterate: Har Homa was established in 1997, four years after the State of Israel launched negotiations which, by definition, were going to involve the future of Jerusalem. To the extent that the government has ever been able to say anything about Har Homa, it’s because the government created Har Homa for the precise purpose of being able to say something about it.

Har Homa – an illegal settlement built on Palestinian land in order to massively expand an historically-false version of Israel’s “eternal and undivided capital” – has framed Netanyahu’s political career. The language employed by the Israeli government concerning Har Homa and the entire settlement project has served to obfuscate, disrupt, and steadily shift the terms of engagement, so that what was once non-existent is now treated as inescapable. Not to mention that no matter how the Palestinians have acknowledged and/or recognized Israel, it’s clearly never been good enough for Bibi.

Since 1997, American diplomacy in the Middle East has been shaped by Netanyahu’s settlement policies. As we approach the Secretary of State’s April deadline for a framework deal, I hope he’s taking note of the pattern that Har Homa, in particular, reveals.