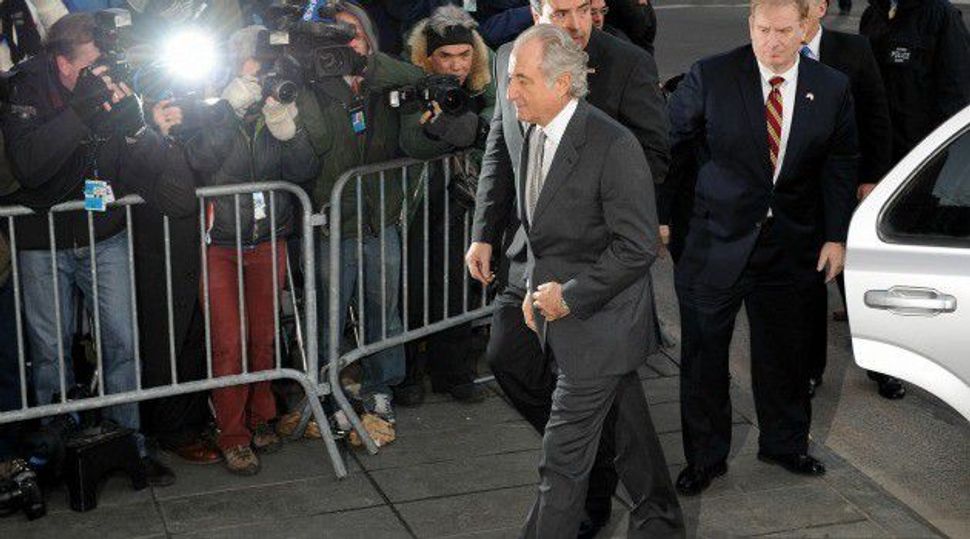 You couldn’t dream up a better villain. Bernie Madoff, the man we all love to hate, is back in the news, opining from his jail cell on matters political, ethical and financial, this time in an interview with Politico magazine.

Madoff won’t win many friends with this new interview, and may even gain a few more enemies. Yet our fixation on him as the villain of the 2008 financial crisis is erroneous, counterproductive, and even immoral.

By now, you probably know the facts. Madoff, once the darling of the American Jewish upper crust, was convicted in 2009 of running a massive ponzi scheme. When the pyramid collapsed, dozens of individuals and many Jewish institutions lost everything they had “invested” with him.

Those victims will be pleased to hear, perhaps, that Madoff says he has “nothing to live for.” Although many said in 2009 that Madoff could never atone for his crimes, he has suffered greatly since: one of his sons committed suicide, another is in jail, and another is battling lymphoma. His wife barely speaks to him. Surely, no matter how much money was lost, Madoff has now lost more.

Yet that’s not the part of the interview that’s made headlines. That honor goes to Madoff’s statement that “I don’t feel that I betrayed the Jews, I betrayed people… I betrayed people that put trust in me — certainly the Jewish community. I’ve made more money for Jewish people and charities than I’ve lost.”

Ouch. This after Madoff’s fraud bankrupted or severely hurt Yeshiva University, Hadassah, the Jewish Community Centers Association of North America, the Elie Wiesel Foundation for Humanity, and the Chais Family Foundation. Add that to Madoff’s kvetches about his sentence (“For all intents and purposes, it’s a life sentence” – duh) and the boredom of prison life, and it’s hard not to loathe the guy.

But Madoff the man is less important than Madoff the symbol. And that’s where we’ve gone off the rails.

In the six years since the world’s financial markets crashed, Madoff has become a symbol of the collapse. He’s an easy villain: a liar, a thief, and someone whose regret remains, even today, equivocal. And even though many of Madoff’s victims have recovered much of their original investments, many others – including vulnerable, trusting bubbes and zaydes, lost everything.

Many more people, however, lost much, much more in the 2008 financial crisis. And Madoff had nothing to do with it. That crisis was brought about by Republican-engineered deregulation of the financial industry, which enabled enormous mergers and incentivized financial institutions to take on too much risk. New security “products,” themselves ponzi schemes of derivatives upon derivatives, were sold by supposedly trustworthy banks and financial advisers to customers who didn’t want to miss out on the next big thing.

And while many in the industry were swept along by the current of usury, many others knew it was all a shell game. Infamously, for example, Goldman Sachs bet against the very securities they were selling to their clients.

Eventually, like Madoff’s scheme, Wall Street’s house of cards collapsed. But who went to jail? Nobody. Most of the big banks were bailed out (“too big to fail”), and the major malefactors of great wealth settled with the government. They wrote it off.

Most likely, the 2008-09 bailouts rescued the world from global economic collapse – not to mention the U.S. automotive industry. They were a very good thing, Occupy’s outrage notwithstanding. But they also went through without teeth, enabling business-as-usual bonuses to be paid to financial service executives, and, with only a modicum of additional regulation, business-as-usual risk-taking to resume with hardly a hiccup.

Has anyone been punished for this trillion-dollar theft from the American heartland? Hardly. The same Republicans who created the financial crisis through deregulation are now resisting any effort to achieve a fairer sharing of the burden. This is now a matter of philosophy, with names like Milton Friedman, Friedrich Hayek, and even Ayn Rand engraved upon the frieze of neo-conservatism – an ideological movement, incidentally, overpopulated by Jews. As Madoff himself said, “I’m not a great fan of redistribution of wealth.”

As a result of this ideology, one-percenters have made billions of dollars – each – since 2009, while real wages have stagnated and the middle class slouches toward insolvency. And while some of those one- and ten- percenters have been generous to Jewish institutions that now bear their names, the amount they have donated pales in comparison to the amounts they have obtained from a rigged financial-political system.

Of course, few rabbis will call out these people for profiting from a system that’s been jury-rigged to their advantage. They’re the donors who write the checks. Even if we could understand the perverse incentives, financial-political complex, and ponzi schemes of the ultra-rich, most of our leaders would not condemn them. Because they depend on them.

And what of Madoff’s institutional victims? Were they as innocent as they now insist? I’ve sat on several for-profit and not-for-profit boards, and I cannot understand how these organizations’ finance and audit committees approved the Madoff investments. The phony paperwork Madoff provided was ludicrously thin, and should never have passed muster.

People and institutions invested with Madoff because they were sloppy. They saw a great money train passing by, and wanted to jump aboard. They didn’t adequately evaluate the risk, and now they complain that their “trust” was violated. Trust? Responsible investing is based on due diligence, not trust.

Did any negligent board members and financial advisors go to jail? Did they even lose their jobs?

Madoff is not the victim here – but he is a scapegoat. It’s a lot easier to blame one dislikable thief than to wrap one’s mind around a venal, rigged and corrupt system of hyper-capitalism that would make Adam Smith blush in shame. We naively suppose that there are good guys and bad guys, and that it’s easy to tell the difference between them. But that story is make-believe.

Instead of Madoff, maybe we should learn from the actual scapegoat, the one in the Torah. In the scapegoat ritual, it’s not that the goat is guilty, of course; rather, all of the sins of the people are projected onto it before it is banished to the wilderness. All of us are culpable. Of course, unlike Madoff, scapegoats are meant to be silent.