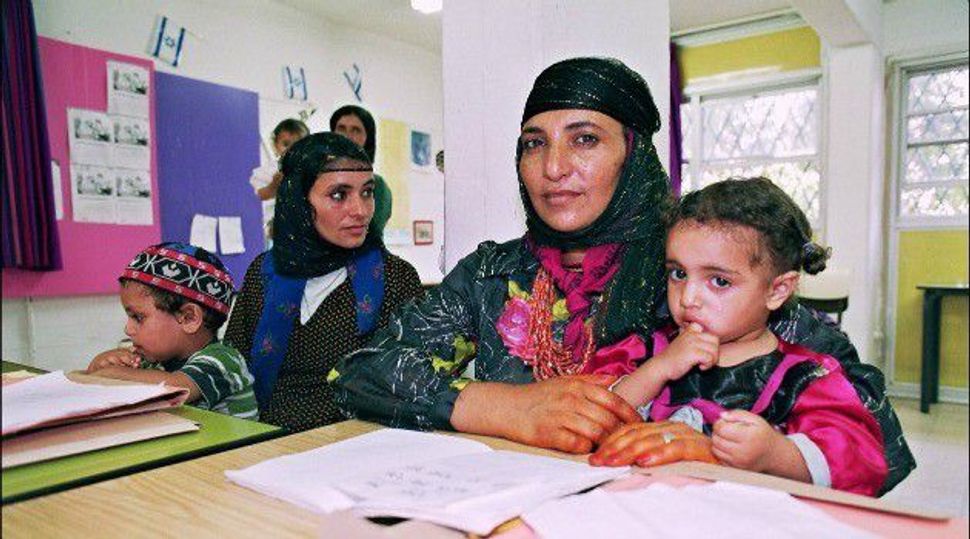 Yemeni Jews get instruction at a center for immigrants in Israel. / Getty Images

As the Israeli-Palestinian peace process grinds on, and the issue of Palestinian refugees continues to be a sticking point, some Jewish groups are arguing that these aren’t the only refugees we should be considering as the parties move forward in negotiations.

They’re calling on Western governments to recognize the more than 850,000 Jews pushed out of Arab countries in 1948 and the years that followed — and claiming that the Arab Jewish refugee issue should be tied to the fate of Palestinian refugees.

“Palestinians document every tent, well and thicket they had here but we left behind property worth billions of shekels,” Meir Kahlon, representing Libyan Jews, recently told the Israeli press. He argued that stolen property should be compensated for as a part of the ongoing U.S.-led negotiations.

And just a few weeks ago, six years after a similar resolution passed in the United States, activists pushing for recognition of Arab Jewish refugees enjoyed a big win in Canada, when pro-Israel Prime Minister Stephen Harper decided to back a government committee recommendation to “recognize the experience” of Jewish refugees.

Unfortunately, while redressing historic wrongs might be admirable, right-wing Zionists have long used the issue of Arab Jewish refugees to compete with and derail the claims of Palestinians. By backing this report, the Canadian government has implicitly, if not explicitly, put the two refugee populations on par with one another and tied their fates together — a highly loaded decision with potentially troubling consequences.

Some Israeli Knesset members are now pushing for compensation for Jewish refugees to be part of the peace process and reports indicate that Kerry’s framework proposal may include a clause recommending compensation for both Jewish and Palestinian refugees, though it is unclear whether these moves were influenced by Canada’s decision.

Understanding full well the implicit message of the Canadian report and the implications of recognizing Jewish refugees, the committee stressed that their findings were not meant to pit Jewish claims against the claims of Palestinians.

Problem is, they invariably do.

The loaded message of Canada’s decision, especially during a time of negotiations, is that Arab Jewish refugees need to be acknowledged with the same spirit as Palestinian refugees. Even the tone of the report itself, which argues that these Jewish refugees are basically the other victims of 1948, advances a right-wing agenda to ignore and delegitimize the Palestinian refugee population for as long as crimes against Jewish refugees also go unpunished. The debate has unleashed an unpleasant and all-too-familiar battle over who has suffered more.

But in this ugly competition for victim status, there is no comparison. Palestinian refugees are currently in much direr situations than Jewish refugees. Unlike Jews displaced during the same era who found refuge in Israel or Western nations, Palestinian refugees have been slighted by the world time and time again: in Syria, Lebanon, Jordan, Kuwait, Palestine and Israel. Crimes against them have persisted from 1948 right up until the present day.

So while the situations may have been comparable during Israel’s founding and the decades that followed, they’re not in 2014.

Today there are almost 5 million Palestinians who fit UNRWA’s criteria for refugee status. About a third of them live in decrepit refugee camps in the West Bank and Gaza or neighboring Arab countries. In the Palestinian Territories alone — where refugees are considerably better off than those residing in other countries — more than 30% live below the poverty line and about as many are unemployed. They continue to face regular military assaults and, by some accounts, such confrontations are becoming increasingly regular.

In Syria, they’re being bombed and starved to death.

As a result of their desperate ongoing situation, refugees rejoice over a collective dream of return, often deemed a perennial threat to the Jewish state. Their fixation on the past has produced some of Palestine’s most notorious terrorists. And with a population of more than 40% under the age of 15, Israel and the Palestinian Authority might have a real crisis on their hands if they do not soon adequately address the pleas of refugees. That does not necessarily mean allowing the full Right of Return, but it does necessitate a workable solution that can better the lives of refugees.

Addressing the claims of Jewish refugees, who by all means deserve recognition and compensation, is not an urgent humanitarian issue in the way that resolving the Palestinian refugee crisis is.

Besides, these current negotiations are between Israel and Palestine, not Israel and its neighbors. The two issues are separate and shouldn’t be mixed up. Tying them together will only derail the claims of Palestinians and stall the peace process.