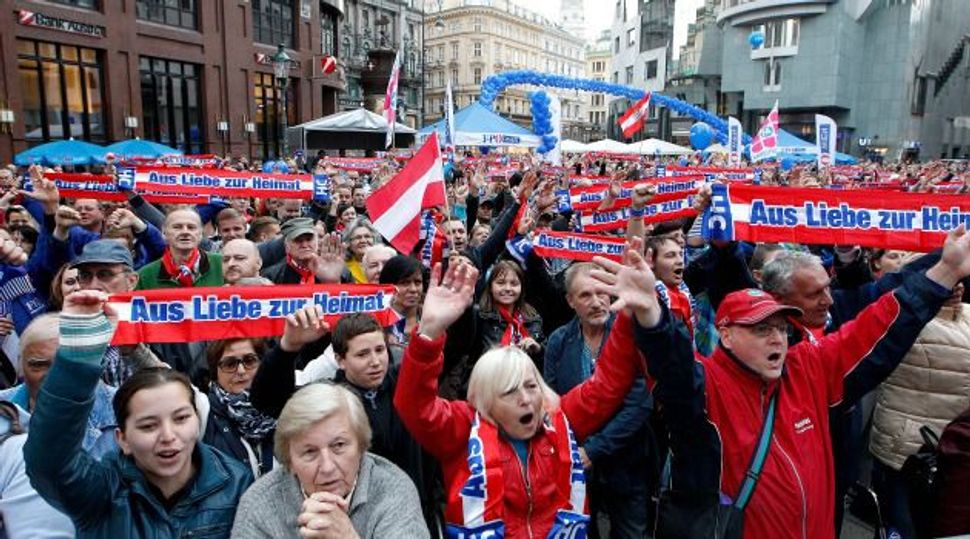 Last Friday, a German magazine article quoted Andreas Moelzer, a member of the European Parliament for the far-right Freedom Party of Austria, saying that the Third Reich had fewer rules, regulations and bans than the European Union, and probably looked informal and liberal in comparison.

The fact that controversial Moelzer — the co-publisher of the controversial German national newspaper “Zur Zeit,” in which an author once praised Adolf Hitler as a “great social revolutionary” — made these statements is hardly surprising. The public outcry that followed was to be expected as well: Politicians from other parties as well as Oskar Deutsch, the president of the Jewish community of Vienna, demanded Moelzer’s withdrawal as a candidate for the upcoming EU parliamentary elections, while news outlets lamented the frequency of Nazi comparisons uttered by Freedom Party leaders.

The statement is outrageous, no question. It is offensive and plain wrong. Austria joined the European Union in 1995 and, growing up there, I never had the impression that I was growing up in a dictatorship. After all, I can work and travel freely in 28 countries, while my grandmother was denied the chance to attend school at the age of 12 and forcibly deported to a concentration camp.

Nevertheless, public outrage over Nazi comparisons is a double-edged sword. While it is necessary, there is little point in doing so unless we face a vital, underlying question: Why isn’t the Freedom Party’s voter base more upset about this? The answer isn’t as obvious as it seems.

When I reported from the Freedom Party’s post-election gathering in Vienna after the national elections in October 2013 (the Freedom Party gained 20.5% of votes, rendering it the strongest opposition force), it was the first time I’d attended a large event of the Party. I was fully prepared to see people with Hitler mustaches and SS uniforms, or at least encounter some neo-Nazis with shaved heads, clad in steel-capped black boots. If someone asked, I would mumble my last name because it sounded Jewish.

But the people I encountered cared more about the available beer and sausage than my Jewish last name. Their language, clothes and hairstyle gave them away as those likely to be in blue-collar jobs, with little higher education, living in Vienna’s outer districts, perhaps disillusioned and socially disadvantaged. An analysis of voter trends after the election in fact revealed that the far-right party would have come first had only those with blue-collar jobs gone to the polls. They also came first among men under the age of 30.

The majority of the Freedom Party voters, as I’ve written before, don’t share the far-right, occasionally revisionist and German nationalist sentiments many of their leaders sport. It’s the simple, populist messages that appeal to those who, for one reason or another, fail to make the effort to think critically about the Party’s assertions — for example that asylum seekers are criminals, that Muslims are a threat to Christian occidental culture, that the EU does little good for Austria except to regulate irrelevant aspects of daily life and charge hefty contributions.

Both the conservative People’s Party and the Social Democrats have refused to form a coalition government with the far-right party in the past eight years. Freedom Party leader Heinz-Christian Strache has repeatedly announced that the “exclusion” of his party needs to end. This hits a nerve with his voters, who do in fact feel excluded — not so much from a governing coalition, but from the opportunities that the EU, immigration and feminism can bring.

I spent ten years in the Austrian public education system and experienced firsthand how the system lacks the resources to balance out economic inequality. When I started public secondary school in a well-to-do neighborhood of Vienna at the age of 10, there were 33 of us in one classroom. In 2002, our ski trip got cancelled because teachers were protesting against wage cuts. In 2003, the number of lessons was significantly reduced, so that over 12 years of schooling students would spend 100 hours less at school than before. In 2007, only 16 students of my formerly bustling class of 33 successfully graduated from my high school. And last November, the parliament passed a new law without reaching an agreement with the teachers’ union. Among other changes, the numbers of hours teachers had to work were raised, and the maximum salary they could earn decreased.

The latest PISA study revealed that one in five 15-year-old students in Austria lack fundamental competency in reading. So, when lashing out against the Freedom Party leaders’ inappropriate comments, we must not forget that many of their followers are probably people who have simply never grasped what was so bad about Nazi Germany.

Combine the state of the public school system with Austria’s reluctance to admit to its active role in the Nazi terror (it wasn’t until 1991 that the chancellor apologized for the crimes committed by Austrians), and it becomes clear that, unless the public is educated about why the Holocaust is still relevant, vilifying the leaders will only add to voters’ feelings of being misunderstood and excluded by everyone else.