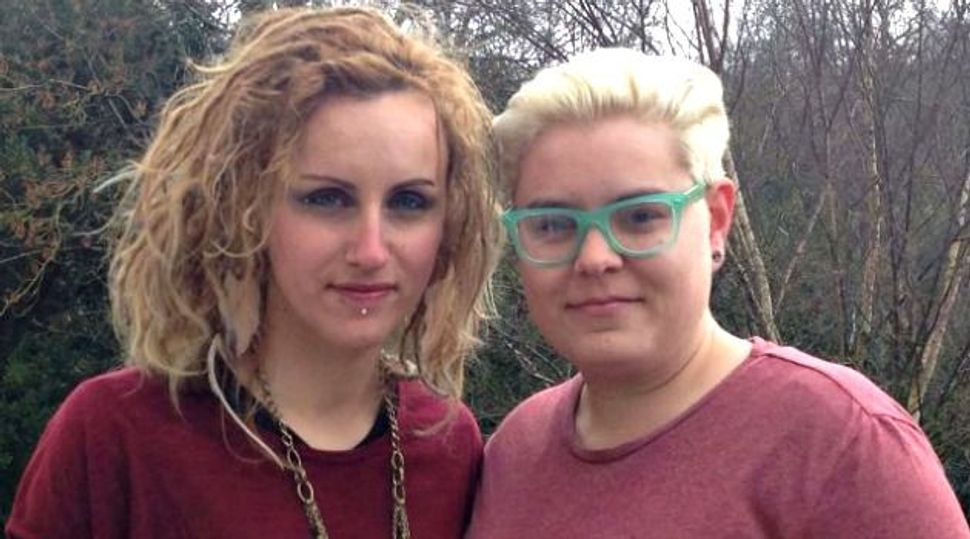 Image by Courtesy of Nicola Pettit

(Haaretz) — Tania Ward and Nicola Pettit will make history this Saturday when they become one of the first same-sex couples to legally marry in Britain.

More than that, their marriage will be among the first to receive a Jewish blessing, as Liberal and Reform streams prepare for a flurry of simchas to follow the change of law.

Since 2005, the United Kingdom has allowed civil partnerships which give the same rights and responsibilities as traditional marriage.

Campaigners, however, continued to lobby for full equality, facing opposition from conservative politicians and religious communities despite broad public backing. The new law comes into effect on Saturday March 29.

The couple, who live in southern England’s seaside Brighton resort, one of the country’s most bohemian centers of LGBT life, met when a mutual friend set them up on a blind date six-and-a-half years ago. “And that was that, really,” says 27-year-old Nicola.

Although Tania is not Jewish, the couple observe the High Holy Days and belong to the upscale Liberal Jewish Synagogue in London’s St. John’s Wood, a favorite among British Jewish celebrities.

Tania, 28, a chef in her family’s bakery business, and Nicola, who works in childcare, had in any case been planning a civil partnership this March. When British parliament passed legislation allowing gay marriage last year, they decided to seize the opportunity.

“We rang up Brighton Town Hall thinking there was no chance we could get married that day, but they had a space,” said Nicola. “They explained there had been lots of inquiries about upgrading civil partnerships, but ours would just be a straightforward marriage.”

Nicola may describe it as straightforward, but it has been a long road to equal marriage in Britain.

It has certainly divided the Jewish community. The United Synagogue and former chief rabbi Jonathan Sacks announced in 2012 that the Orthodox establishment would oppose same-sex unions, arguing that “any attempt to redefine this sacred institution would be to undermine the concept of marriage.”

Nonetheless, Reform and Liberal Judaism gave the initiative their wholehearted support. Indeed, in 2005, just before civil partnerships were introduced, Liberal Judaism became the first religious movement in the country to publish an official liturgy for blessing same-sex unions. Brit Ahava – “Covenant of Love” – draws on texts which rabbis and couples can choose to form part of their ceremony.

That will form the basis for Tania and Nicola’s celebration, performed by Rabbi Janet Darley in front of 100 guests after Shabbat ends on Saturday night.

“It’s really going to be a shechiyanu moment,” says the rabbi, who says that when she and her husband married five years ago, “we dumped some of the wine out of the Kiddush cup before we drank, because we said we could not have a full cup of joy while so many of our friends were denied theirs.”

Darley has officiated at numerous civil partnership blessings, “but that feels very different; it’s clear those are second-place ceremonies.”

Since this will also be a mixed-marriage, not all the usual elements will apply, such as a ketubah. But alongside their vows there will be readings in Hebrew, Kiddush over a glass of wine, “and definitely the breaking of the glass – this is the bit our friends are very excited about,” adds Nicola.

Tania says that the religious ceremony will be especially meaningful for her.

“Having the Jewish blessing as part of our day is more important to me than to Nic,” she says. “It’s almost my way of saying thank you to her family. For people who do have a faith it must be very difficult to accept someone who doesn’t, but Nic’s family have been great and really welcomed me as one of the family.”

Nicola is proud that more liberal streams of Judaism have been so quick to embrace equal marriage, and gracious about the opposition from other sections of the community.

“Being Jewish, it seems strange that after all the things that the Jews have gone through that us getting married could in any way be seen as a threat to the Jewish people,” she says.

“Nicola said a little while ago that in a few years to come we are all going to look back and think, what was the fuss all about?” added Tania. “Once upon a time, interracial marriage was a big deal and now people don’t think twice about it. In years to come, this will be completely normal. All it is, is two people who love each other. We are just getting married.”