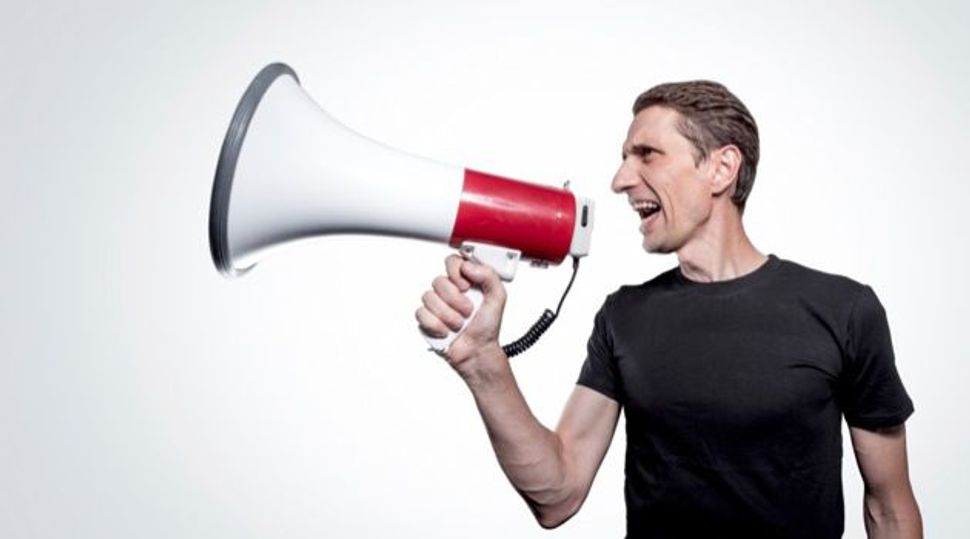 Can You Hear Us? Some organizations rely too heavily on self-promotion. Image by Thinkstock

Let’s begin with a truth: Much of what gets published by and in the Jewish communal world is pure self-promotion. Look around, and you’ll see articles, comments, essays, posts and tweets whose chief purpose is to extol the virtues of this or that Jewish communal organization or program. Most authors of this material don’t even try to disguise their motivations. They might think of it as “thought leadership,” but it’s really selling by another name.

Note: As a Jewish communal professional, I have engaged in this kind of activity myself, and I will surely do so again in the future. But for the moment, let’s hit the pause button on the self-promotion machine to reflect honestly on the situation.

Fact is, no one buys — really buys — self-promotional content. No one is authentically moved by it. Some people might enjoy the brazen honesty of naked self-promotion (it’s not impossible to conceive of a rabid Ron Popeil fan), but I imagine that this is a very small niche group. If we seek to be effective communicators, we must do other things.

There are places where self-promotion is actively discouraged, and we need to learn from them. In the world of journalism, for instance, the only self-promotion allowed is paid for and then stamped with the word “advertorial,” to ensure that readers won’t treat it as real news. On the whole, journalism has managed to keep synagogue and state, editorial and advertising, separate. We should strive to do the same — for our colleagues and ourselves. When everything is an advertorial, nothing is trustworthy.

This is serious business. A sustainability issue, even. Create truly trustworthy communications, and you will help build stronger, longer relationships with your constituents, present and future. As Ron Wolfson says, in “Relational Judaism, “After more than forty years of living and teaching the Jewish way, I have come to an understanding about the essence of Judaism: It’s all about relationships.”

Of course, speaking in public is a very complicated business. Every single act of articulation has a goal trailing behind it. “People only speak to get something,” David Mamet said in his Paris Review interview. “If I say, ‘Let me tell you a few things about myself,’ already your defenses go up; you go, ‘Look, I wonder what he wants from me,’ because no one ever speaks except to obtain an objective. That’s the only reason anyone ever opens their mouth, onstage or offstage.”

So let’s choose better goals. In the past year, I’ve had the great fortune to spend time with teachers, and they’ve reminded me that while one might always have a goal when one speaks, that goal can be something greater than self-promotion. I’m talking about the goal of education.

What if we made education, rather than self-promotion, the goal of the majority of our public communications? Is it ridiculous to suggest that the things we publish might have a pedagogical aspect? An inspirational aspect? That we can do better than use our words to jostle for position? What if we used them to host an open discussion about the truth?

If we did the above, we would dramatically cut down on the advertorial glut — and this would have great implications for our Jewish organizations. But where to begin? Here are a few suggestions:

Keep yourself out of the picture. Try writing an entire piece without mentioning one’s organization and its great and necessary work. Show what you know, share what you know and leave mention of your organization for the byline at the bottom of the page. Seek examples from the outside. Quote experts who aren’t on your payroll. Act more like a journalist and less like a propagandist. Your articles will be stronger, and your organization will be seen as more trustworthy.

Create meaningful conversation. When you do promote, don’t merely promote. Instead, intentionally use these moments to start and nurture authentic conversation about your organizational values. Let’s say your organization is doing an event on Jewish food justice. Don’t just link to it on your Facebook page or tweet it out; instead, lead a conversation among your constituents about the connections between, say, tikkun olam and food issues.

Get some distance. Look at what you’ve written from the point of view of someone completely removed from your world. Would someone with no vested interest in your organization get something substantial from your article? If not, you might want to rewrite.

Know your goal. Before you post a post or draft an article, spell out, to yourself, the educational goal of your piece. “This post will show effective ways to build an alumni program,” or, “This article will spell out the real challenges of building a strong synagogue in the 21st century.” Knowing what you hope to accomplish just might help you accomplish it. It also might prevent you from slipping into self-promotional mode.

Try swimming into the mainstream. Publish your thoughts in non-Jewish media. If you have something truly powerful, important and valuable to say, you should be able to convince mainstream editors and producers to feature it. Yes, it can be a challenge to mainstream your ideas, but the effort involved will prove extremely valuable if you succeed.

Admittedly, some level of self-promotion is necessary to prove one’s value to those who support our organizations, and there are appropriate moments for selling (in meetings with donors, in whitepapers about your programs, in direct-marketing pieces, in print ads). But if your organization aims to be an authentic thought leader, you must know how to differentiate between the two activities. The idea of separation, havdalah, is nothing new to Jews. Let’s remember that before we speak, and then act on it.

Ken Gordon is the senior social media manager and content strategist of the Partnership for Excellence in Jewish Education and the co-founder of JEDLAB.