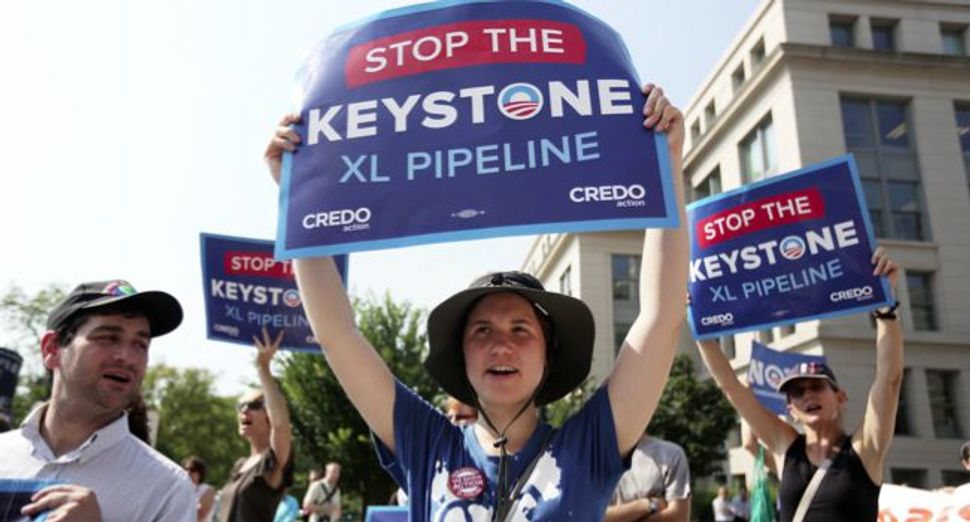 In the Pipeline: President Obama has been taking heat from his liberal supporters who see the pipeline decision as a litmus test. Image by Getty Images

It’s time for a grand bargain on the Keystone XL pipeline.

For years, President Obama has been stuck in between a rock and a tar sand. Environmentalists have made the pipeline, which would connect tar sands in Canada with refineries in the United States, a cause célèbre. To them, it is a defining moment for the Obama presidency, which has danced on the edge of liberal disappointment. Approve the pipeline, the greens say, and your legacy is permanently, er, tarred.

And yet, 2014 is a congressional election year, and the economic benefit of the pipeline is indisputable. Republicans, too, have pounced on it as a political issue, and promise to make life even more miserable for Democrats if Obama says no.

So, for several years, the administration has dithered.

Recent events in Ukraine, however, have made blocking the pipeline that much more difficult. Russia provides over half of Europe’s oil. The case for American energy independence has always been a strong one (and one which American Jews, eager to reduce dependence on Arab oil, often support). But with Russia invading a sovereign nation, and Europe powerless to intervene because of the Russian petroleum supply, the case just became that much stronger. Really, it’s hard to see how Obama can still say no.

But he can still make the Keystone XL a win for everyone — by breaking type and engaging in some good old fashioned Washington horse-trading.

As J.J. Goldberg and I have each discussed in these pages, climate change is perhaps the most outrageous example of corporate, partisan politics. It has become politically necessary for Republicans to deny that anthrogenic climate change even exists — and this in the midst of this Polar Vortex Winter, as Alaska cooks while Washington itself lies buried in snow.

Intelligent Republicans know that this is (in the words of M.A.S.H. Colonel Henry Potter) horse puckey. Newt Gingrich, for example, had long advocated technological approaches to remedying climate change — what experts call “geoengineering” — until he ran for president and had to backpedal on whether climate change is real at all. The Koch Brothers (whose money comes from fossil fuels), the utilities lobbies, the automobile manufacturers — if you’re a Republican office-seeker, admitting the scientific consensus on climate change is political suicide.

I have a hunch that many Republicans are looking for a way out. Of course, they don’t want to hand Obama any victories. But they also want to get Keystone through and, in some cases, do something about climate change.

Meanwhile, on the left, one of the two major objections to Keystone XL is that the pipeline will massively inflate our carbon footprint. (The danger of leaks and pollution is the other.) The Obama administration can address these concerns by linking approval of the Keystone XL to meaningful Congressional action on climate change.

It could be as simple as a quid-pro-quo. Keystone is expected to add five gigatons of greenhouse gases over its lifetime. Tie approval of the pipeline to an equal reduction, over an equal period of time, from automobiles and power plants.

This would enable Obama to keep his promise to approve Keystone “only if this project doesn’t significantly exacerbate the problem of carbon pollution.” It would enable the United States to continue on its road to be a net exporter of fossil fuels — a remarkable turnaround. And it would create jobs in parts of the country where they are badly needed.

Arguably, many of the same benefits could be obtained if Obama acted by executive order — his new favorite method, in light of the intransigent Congress. He could issue directives to agencies to make up the five gigatons of GHGs without the need for congressional approval.

But this is a second-best solution. Administrative actions are easily reversible, and besides, President Obama has already issued an executive order on climate change. Most importantly, acting alone passes up the opportunity to get something for something. We don’t need House Republicans to cry Uncle on climate change — but we do need to break through the magical thinking that is currently the party’s dogma.

Give Paul Ryan and John Boehner some room to maneuver here. Let them say that the bargain is the best they could do. Let them share credit for “forcing” the administration to approve the pipeline. Hell, let them shape what responses are put into place — I’ve championed geoengineering for twenty years, and if Republicans like it because it doesn’t restrain the profits of car, coal, and oil companies, fine. The planet is too important to sacrifice for principle.

Those of us who believe that our Judaism is more than a mere cultural affectation (and those of us who don’t work for neo-con-funded Jewish magazines) have long seen addressing climate change as a moral imperative. We are also understandably concerned about our nation’s dependence on foreign oil, and on the economic welfare of working class people. Ironically, the events in Eastern Europe make now the perfect time for action to address all of these concerns. Now is the time for a Keystone Grand Bargain.