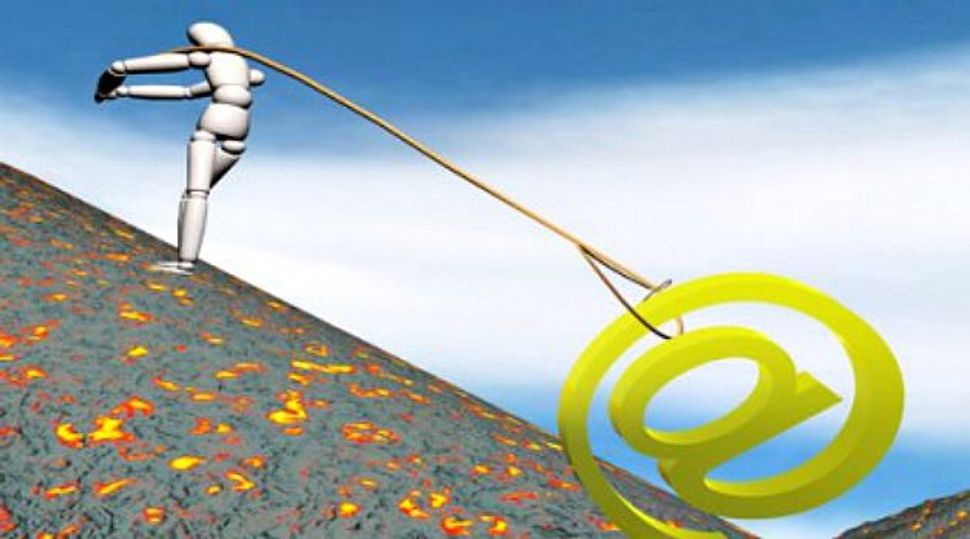 Most of the year, we bemoan but ultimately accept the fact that our work lives require us to be shackled to our smartphones. But as Passover approaches, that reality becomes even more problematic. How can we celebrate our liberation from slavery when we still feel — mentally, if not physically — enslaved? How can we rid our houses of chametz — the leavened food that Hasidic masters taught symbolizes everything unessential and overcomplicated in our lives — while holding fast to something that complicates our lives more than any breadcrumb ever could?

Romemu, a progressive synagogue on Manhattan’s Upper West Side, today announced its quirky solution to this contemporary problem. In a notification sent out to the entire congregation (via, yes, email), Rabbi David Ingber and Executive Director Ilene Sameth wrote that over the holiday they will be getting rid of “The Ultimate Chametz: Email.”

From Monday evening, April 14th until sundown on Tuesday, April 22nd, Romemu will not send any community emails and the staff will not send or respond to any individual emails.

And since any chametz that is owned during Pesach should not be eaten after Pesach (this is known as chametz she’avar alav ha’Pesach), any emails that come in while we are out will not be read. Everyone will get an auto-response asking that the email be resent after Pesach.

After reassuring congregants that staff will still be reachable by phone voicemail in case of a death or other emergency, the Romemu leaders signed off with an invitation to “De-email…and taste freedom.”

For Sameth, who first conceived of this idea, the desire to “de-email” came out of a reflection on what would happen if she were to relive the Passover story today. She realized that she would never make it to the Red Sea to experience the miracle of liberation, because she would be too busy checking her inbox.

“I would never have known that everybody was leaving Egypt,” Sameth told the Forward. “I would have missed the most important thing!”

Sameth was quick to clarify that this idea came to her “not as a way to escape work, but as a way to deepen our practice and… open us up to the promise of liberation.” Her hope is that “quieting the mind and eliminating the nervousness of ‘am I missing something?’” will give congregants a new appreciation for the “deeper meaning” of Passover, she said.

If Sameth’s language sounds a lot like something you might hear at a meditation or yoga retreat, it’s no coincidence: Romemu is a congregation that “seeks to integrate body, mind and soul in Jewish practice,” according to its website. “Unabashedly eclectic, we engage in body practices like yoga, infuse traditional liturgy with the energy of ecstatic chant, and ground our practice with meditation and contemplation.”

Ingber, the synagogue’s rabbi, is known for incorporating his own experience with Eastern spiritual practices into Romemu’s Shabbat and holiday services. It’s a community that Sameth describes as being “based on mindfulness and influenced by mindfulness meditation” year-round. So, while the synagogue’s new Passover policy may strike outsiders as offbeat, it’s entirely of a piece with the congregation’s New Age ethos.

Still, not all staff members are likely to be equally enthused about abandoning their inboxes for an entire week. Sameth acknowledged this in a March 18 email to Romemu staff. “I also know that for some of you, the very idea of not checking email gives you the hives,” she wrote. “But it is very liberating.”

“It does give them a little sense of nervousness,” Sameth later told the Forward. “But there’s also an excitement about being able to step away from that.” She described her colleagues as “both excited and challenged” to realize that the synagogue was moving forward with this plan.

Asked what she recommends for those who bristle at the idea of liberation from email, Sameth replied, “Living with the discomfort, and not changing what you’re doing to relieve that discomfort, can be a great learning opportunity. Sometimes you learn more from things that make you uncomfortable — and I do think they’ll learn something.”

In fact, for Sameth, the ideal outcome of this Passover experiment would be for the “de-emailing” practice to spread far and wide in the Jewish world. “If people can give themselves this gift, it would be a remarkable statement that the Jewish community is willing to recognize the real chametz in our lives — not just the leavened bread.”