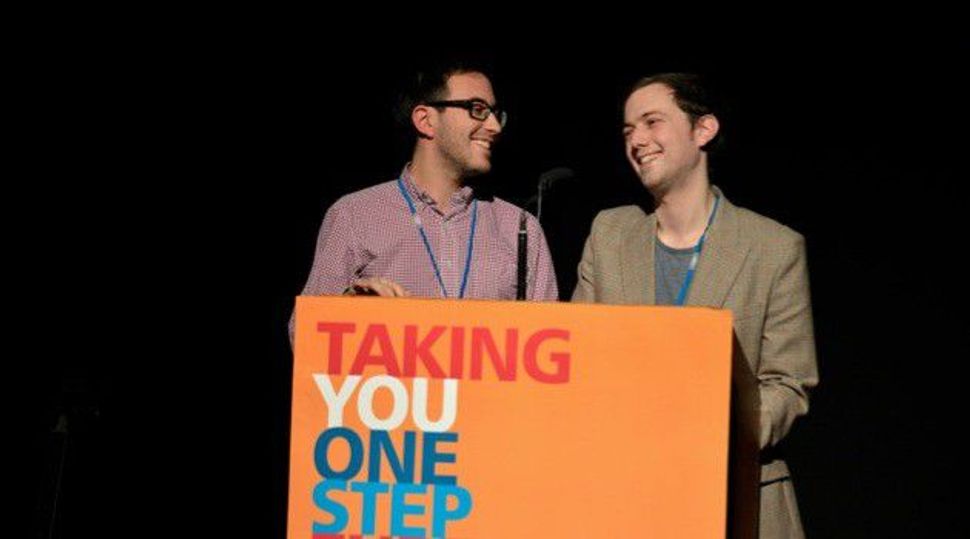 Youthful Jewry: The Under-30 organizers of this year?s Limmud UK. Image by FLIX?N?PIX

A number of times over the last few years, I’ve had the same, mildly disconcerting, conversation.

I’m a pretty involved in the UK Jewish community, spending a big chunk of my life on the merry-go-round of Jewish events. The community also forms of big part of my social life and after 42 years of involvement I know a fair number of people.

The conversation happens at some Jewish event or other — Limmud, Jewish Book Week, or a performance of some kind — and it only happens when the, um, joint is buzzing. I’ll be schmoozing away with the kind of person I see at such events and one of us will suddenly stop and, as if gripped by a sudden anxiety, and say, “This is all just a bubble isn’t it?”

The conversation will then proceed with the sharing of the same worry: Is all this activity, this abundance, this excitement, just for the same small, shrinking group of involved Jews?

Make no mistake, in terms of cultural, educational and institutional vitality, UK Jewry has never had it so good. There are a vast range of Jewish organizations, putting on a vast range of programs, from the mainstream to the fringes. The opening last year of the multi-million pound Jewish community centre JW3 has added to what was already a creative and dynamic Jewish scene. The jewel in the crown, Limmud, goes from strength to strength, transforming not just the British Jewish community, but increasingly other Diaspora communities too. Whatever your Jewish interest is, you will find it provided for in the UK.

The occasional anxious conversations that I have with others like myself, who are immersed in the UK Jewish sea, stem from a difficulty in reconciling this vitality with the sombre demographic picture. If things are so good, why are ‘we’ – i.e. non-Haredi Jews — still declining in numbers? Is the abundance of provision only servicing the needs of a highly engaged few, blind to the needs of the apathetic and declining non-Haredi Jewish majority?

The UK’s Institute of Jewish Policy Research’s recent National Jewish Community survey, together with last year’s Pew survey in America, appear to show a consistent and polarizing trend: Haredisation and greater orthodoxy on one end, secular assimilation on the other, a declining mainstream in the middle. As a sociologist, there is much I could say about both surveys. In particular I could point out that the JPR’s survey has still not been fully analyzed and there is much work to be done in teasing out the trends in the community. I could also point to some of the differences between US and UK, such as the dynamism and rapid growth of the Masorti (Conservative) movement in the UK and its precipitous decline in the United States.

While the picture is clearly more complex than the sometimes shrill and doom-laden headlines and op-eds portray it, it is hard not to conclude that there is a long-term trend towards reduced involvement in Jewish practice and communal life within what was one (and to an extent, still is) the mainstream of American and UK Jewry. This is part of a wider trend in the West in which “moderate” religion is losing ground to both secularisation and fundamentalism.

But the trouble is that this kind of demographic, quantitative sociology has limitations that are often ignored in Jewish communal discussions. It tells us very little about lived experience, institutional practice and the way Jewish life today feels. And residing in the gap between statistics and lived experienced lie the anxious conversations that I reported above.

Addressing this gap requires in part – and as a sociologist you would expect me to say this — more research. Publicly available knowledge of who exactly takes part in Jewish institutional life, particularly Jewish cultural events, is patchy in America and virtually non-existent in the UK. We know very little of who is doing what in the Jewish community.

In the UK there has also been little investigation of the rich dynamics of Jewish everyday life, although there is a little more in the United States. Jewish organizations in both countries are very unlikely to fund the kind of ethnographic research that would shed light on what being Jewish feels like. When qualitative research is commissioned, it tends to be highly focused on policy-making, rather than open-ended.

All this means that the field of Jewish research in the UK, and to a lesser extent the United States, is very much top-down, with little ability to understand the complexities of modern Jewish identity and practice beyond broad trends. We certainly know a lot about Jews in both countries, but there is also a sense of anxiety motivating research — a fear of what Jews are doing and of their potential for assimilation — that can sometimes lead to a lack of empathy.

This anxious approach to research can have the result of instrumentalizing Jewish communal activity. One of the assumptions behind the anxious conversations that I and others have, is that if Jewish organizations don’t function to prevent assimilation then they are somehow “failing.” In a private conversation following the publication of the JPR report that was recently reported to me, a group of UK rabbis expressed the feeling that they had to rethink their entire work — because what they were doing clearly “wasn’t working.” This has also been the tone in American discussions about the Conservative movement, where the fact of its decline is often seen as invalidating its work.

What’s forgotten in such discussions is that outreach and preventing assimilation is not the only standard by which to judge Jewish activity. Not only are there other valid goals, but some things — particularly religious activities — can be worth doing for their own sake.

This is how I square the circle, how I bridge the gap between the knowledge of demographic decline and the fact of British Jewish communal vitality: Limmud, JW3, the whole panoply of exciting activities that are available to Jews in the UK today, are intrinsically worthwhile, no mater who is or is not attending.

The conversation over the Jewish future needs to grapple with the troubling simultaneity of apparent decline and vitality. If there is a case that Jewish communities need to change to address decline, it should not be made by belittling the good things that are currently happening. Make no mistake, Jewish life in the United States and UK has never been more diverse, passionate and invigorating. If the non-Haredi future cannot be guaranteed through this, then at the very least it should be comforting to proclaim that, to shamelessly misquote Simon Rawidowitz, “if we are the last non-Haredi Jews, then let us enjoy our decline.”

Keith Kahn-Harris is a sociologist and writer. He is an associate fellow of the Institute for Jewish Policy Research, and the editor of the Jewish Journal of Sociology. His latest book is “Uncivil War: The Israel Conflict in the Jewish Community”