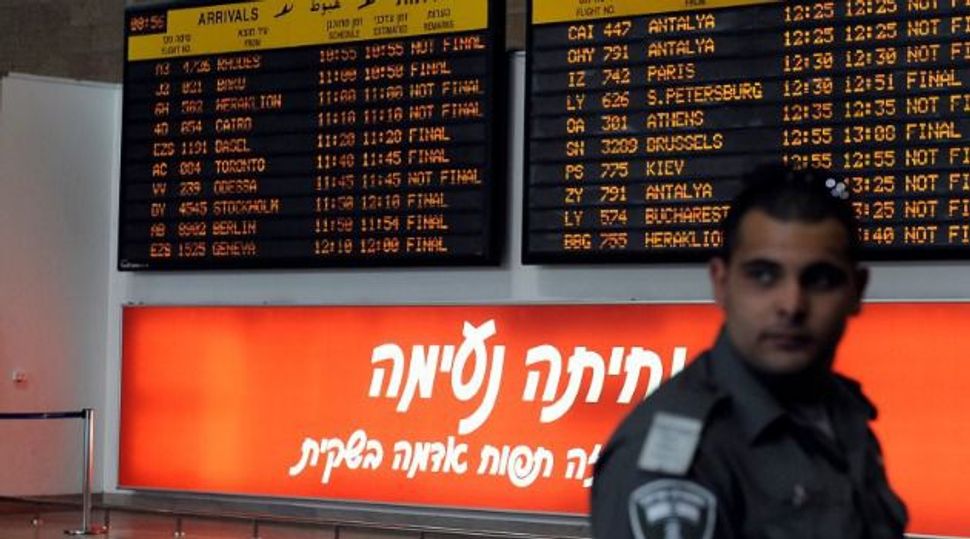 The Jerusalem Post’s latest editorial wades into the Israel-U.S. debate over travel visas — and comes to some absurd conclusions.

The government of Israel has been trying for a while to reach an agreement with the American authorities allowing Israeli tourists to visit the U.S. for a short time without a visa. The U.S. has always refused to grant Israel such an agreement, despite the fact that most Western nations, including European countries, Australia and New Zealand, already enjoy it as participants in the Visa Waiver Program.

The American government recently explained why Israel’s request was denied: “The Department of Homeland Security and State remain concerned with the unequal treatment that Palestinian Americans and other Americans of Middle Eastern origin experience at Israel’s border and checkpoints, and reciprocity is the most basic condition of the Visa Waiver Program,” State Department spokesman Jen Psaki said March 21.

It’s a known fact that Arab Americans are often subject to harsh security checks upon their arrival in Israel, and in some cases denied entrance in the country. Among others, it happened to Maysoon Zayid, who says she was abused by security guards at the Ben Gurion Airport before her flight back to New Jersey, and Anna Lekas Miller, who was refused entry at the same airport. What’s news, however, is that the American government is making it clear to Israel that such a policy has consequences.

Now the Jerusalem Post has written an editorial asking the State Department to take into account “Israel’s special security challenges,” which make “stringent security measures” necessary. It also complains that Israeli youngsters who want to visit the U.S. have a much harder time entering the country than their Western European counterparts.

Both these assertions have some truth to them: Israel faces much greater security challenges than, say, Italy or France. And I am well aware that, as a European citizen, it’s much easier for me than for my Israeli friends to enter the U.S. They need a visa, I don’t. I get “preferential treatment,” they don’t.

But, make no mistake, “preferential treatment” is exactly what we’re talking about here. Entering a foreign country without a visa is a preferential treatment, not a basic right. The U.S. has said, plain and simple, that it has no intention of granting such treatment to Israelis trying to enter America, so long as Israel discriminates against American citizens trying to enter Israel. “Reciprocity is the most basic condition,” in the State Department’s own words.

The U.S. commitment to protect the interests of its own citizens abroad is well known internationally. So how could the Israeli authorities – or the Jerusalem Post, for that matter – even think that discrimination against Arab Americans is something that the U.S. would be willing to overlook, no matter how pressing the security challenges?

Perhaps that’s the core of the issue: to America, it’s about American citizens. Those individuals whom Israeli authorities see as Arabs who also happen to possess a U.S. passport? To American authorities, they’re just, you know, Americans.

Moreover, the Arab American community is large and constantly growing. According to the Census Bureau, there are 1.8 million people of Middle Eastern descent living in the United States, more than twice what the number was in 2000. The Arab American Institute Foundation puts that figure much higher, at almost 3.7 million.

Given all this, it makes perfect sense that Arab Americans are making their voice heard, just as any other large organized minority would do. So why the surprise at the State Department reaction?

People can think whatever they want about Israel’s security policy and Israel’s right to keep people of Arab descent outside its territory. But to expect the U.S. to turn a blind eye to the treatment of its own citizens, gloss over the condition of reciprocity and accept Israel into the Visa Waiver Program? That’s absurd.