Memo to New York Times: Women Are Jews, Too 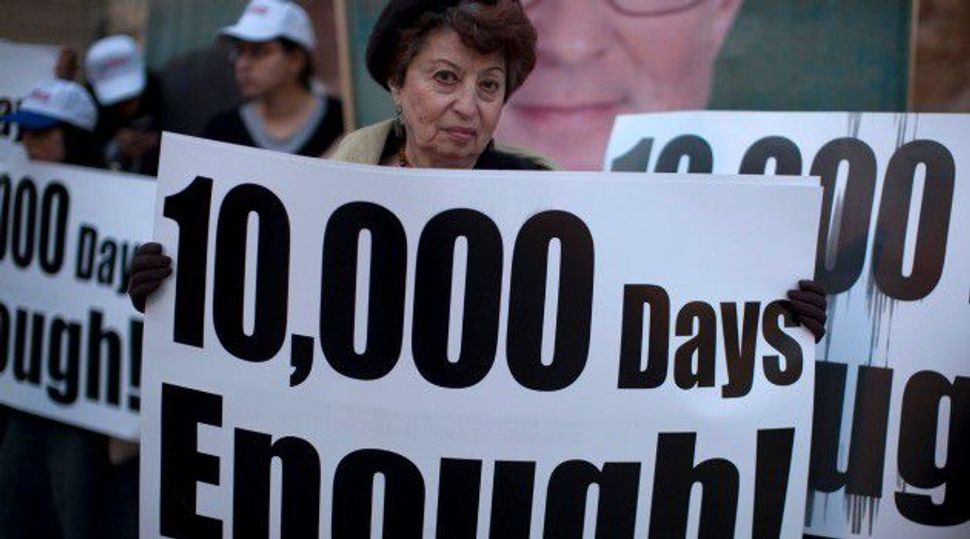 Protesters call for the release of Jonathan Pollard / Getty Images

So I check the homepage of the New York Times on Thursday afternoon, as I regularly do several times a day, to see a prominent story proclaiming that all the talk of freeing convicted spy Jonathan J. Pollard is dividing American Jews. “More and more American Jews say Jonathan J. Pollard should be freed, but they are unsure whether he should be used as a chit in a diplomatic transaction with Israel,” said the tout on Mark Landler’s story.

Gee, I think, maybe my editorial on this subject — which was pointed and, to some degree, contrarian — might be mentioned.

Wrong. Evidently, in the Times and in so many other venues, only men get to speak for “American Jews.”

There were seven people quoted in this story, and they dutifully represented a respectable range of political opinion, from the establishment Malcolm Hoenlein, head of the Conference of Presidents of Major American Jewish Organizations, to the left-wing, Left Coast editor of Tikkun, Michael Lerner.

They all had one thing in common, however. All were men.

If this were the first time I had noticed such an omission, I wouldn’t be writing this blog post. I know what it’s like to report and edit and publish on deadline, and I know that sometimes it’s difficult to achieve a diversity of opinion makers in a single story. This has happened under my watch at the Forward, I’ll admit.

But the Landler story illustrates a persistent problem in that part of the media where “opinion” and “Jewish leaders” intersect. Women are poorly represented in both realms, as our annual leadership survey shows. And we women don’t often enough “lean in” to enter the loud, crowded fray that passes for public dialogue these days.

Some of us do, however. Some of us do the hard work of puzzling through a tough issue and laying out our opinions on behalf of ourselves or, in my case, on behalf of our news organization. And it’s just possible that our views are shaped, in part, by our gender. I know that mine are.

It’s not always pleasant work. (I shudder sometimes reading the comments on my editorials and the responses on Twitter.) But I believe passionately in the intellectual challenge and civic necessity of informed opinion and, yes, I do think that I am at times speaking for other women in my community and beyond. But I find it astonishing that, in 2014, it’s still so difficult to be heard.

For the record: I agreed with the general consensus that it is a bad idea to include Pollard in the struggling negotiations between Israel and the Palestinians. I said that, after decades in prison, he could released on humanitarian grounds. But I argued strongly that, given the severity of his crime, he should not be pardoned.

You can read that opinion in the Forward. Not in the Times.

Memo to New York Times: Women Are Jews, Too