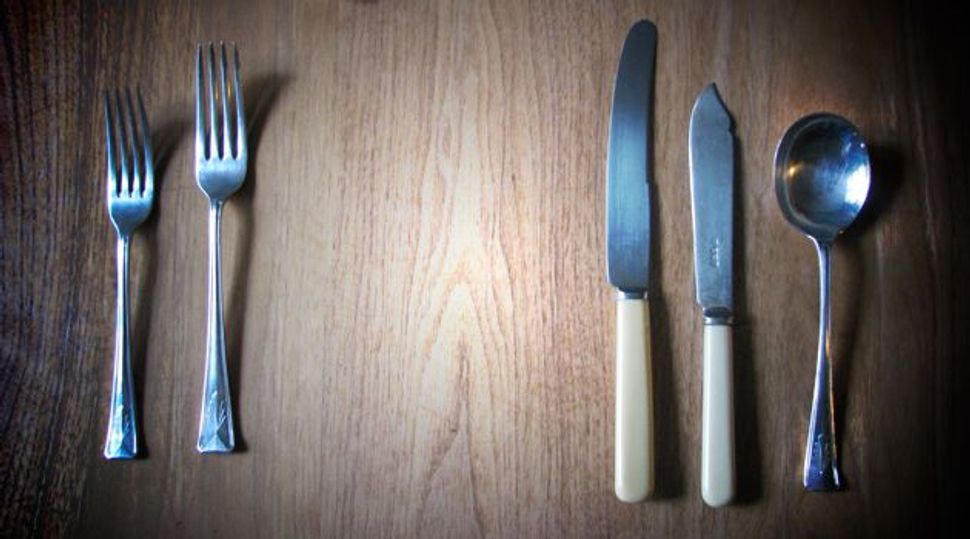 It’s the smell that hits me first — musty, almost sweet, emanating from the green felt that cradles each piece of silver cutlery in its own place. Every year as I ready for Passover, I unlock the nondescript cabinet tucked into a corner of my New York apartment, pull out the two shaky drawers, and am drawn in again by that smell.

The Sheffield silver that I inherited from my parents is my most precious heirloom. It is elegant and graceful, but not fancy, without much embellishment save for ivory handles on the knives. Far more likely to have been used by the servants in Downton Abbey than by the lords and ladies upstairs.

But it is a direct link to my English past. My mother’s family, which had lived in Yorkshire for generations, decided to leave after World War II, when the British economy was in shambles and latent anti-Semitism clouded their lives. Some went to Australia; most went to New York.

My grandfather was the last to leave, and by then, my mother had met my father here, got engaged, and was about to be married. Six weeks before the wedding, my grandfather landed in New York with the remainders of the family’s possessions and a full set of silver cutlery for my parents as a wedding gift.

Their names are inscribed on the outside of matching napkin holders. A few other small, personal momentos are scattered at the bottom of the drawers.

But the rest of the drawer is full of cutlery. There are tall knives, medium-sized knives, fish knives and long, sleek ones used to slice through hefty pieces of meat. The forks come in all shapes and sizes, too. And the spoons: wide, generous ones to sip soup; oval ones for pudding; teaspoons and espresso spoons and lots of sturdy serving pieces.

By the time the silver came to live in our home, my parents had long stopped keeping kosher, but since we did, for a few years the cabinet remained locked, the cutlery unused.

Then my husband and I decided that we would kasher it all and use it just for Passover. With so many pieces, it was a long, tedious task. But never have we regretted it. Each year, those graceful forks and welcoming spoons line our seder table. I know it’s Passover when I open the drawers, smell that scent, and hold onto my past.

Whether it’s a silver kiddush cup used at family weddings, a siddur carried through the Holocaust, a bracelet passed from grandmother to mother to daughter on the day of their bat mitzvah — heirlooms tell the story of our families. Please share your Jewish heirloom stories with us by April 23rd. Several submissions will appear in the Forward in May.