The Irony of Celebrating Passover in Egypt 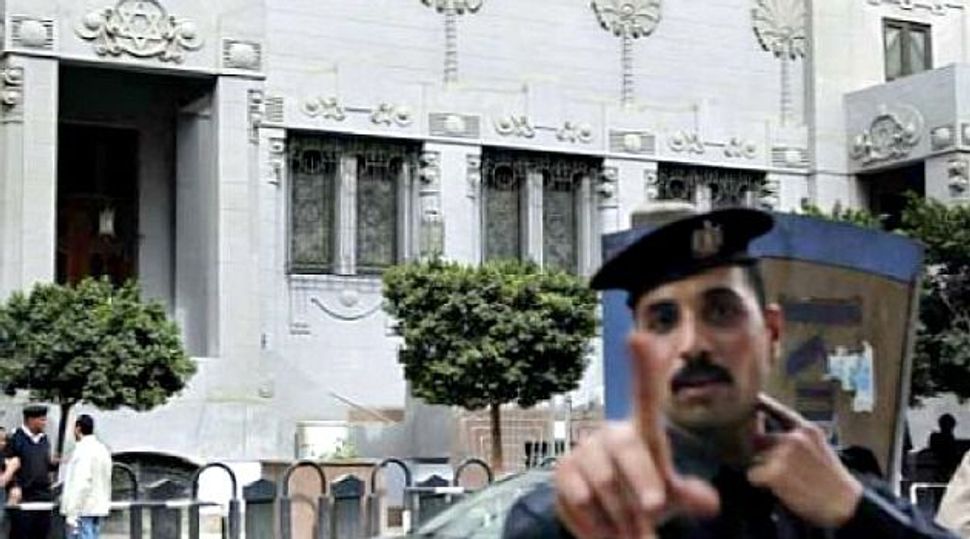 An Egyptian policeman in front of the Shaar Hashamayim Synagogue in Cairo, Egypt. / Haaretz

In early April 2012, two friends and I visited the Shaar Hashamayim Synagogue in downtown Cairo to observe the first night of Passover in Egypt. The irony was too obvious to point out, and so we didn’t.

When we arrived, we joined a line that had formed in front of the building, which was guarded by roughly 20 police officers. I glanced around to see if anyone was paying attention, assuming that the sight of people entering a synagogue would cause a stir. Anti-Israel sentiment is widespread in Egypt, and opinions about the government’s relationship with Israel are often suffused with anti-Semitic rhetoric. Two years earlier, a bomb had been thrown at the building. But no one seemed to notice us.

After about ten minutes, we arrived at the front of the line, where a police officer entered our names onto a list. I didn’t like the idea of being on that list, but was pretty sure I wasn’t getting in otherwise. We walked down a corridor that opened into a massive central courtyard, adjoining a high temple wall adorned with Hebrew writing. But we weren’t going in there. Instead, we were ushered into a brightly lit room at the far end of the courtyard.

Seated around the long table in the center of the room were about 15 foreigners, most of whom were likely Jewish; representatives from the U.S. Embassy; Muslim Egyptians; a Moroccan Jewish rabbi who’d flown in from France; and Carmen Weinstein, the head of Egypt’s Jewish community. As far as I could tell, no Israelis were present.

No one welcomed us. We eventually found seats at the end of the long center table, and I waited uncomfortably for the service to begin. I supposed that at this point, in the room filled with Passover celebrants in a Cairo synagogue, I’d finally feel the gravity of the moment. But I mostly felt hungry.

Seated at circular tables behind me were a few elderly Egyptian Jewish women. Before I could go over to talk to them, the rabbi began the service. Hearing Hebrew spoken in the middle of Cairo sounded absurd, like a forbidden tongue in a clandestine ritual. I thought of Jews in the ghettoes huddling together by candlelight to study Torah, and then quickly reprimanded myself for being hyperbolic. But I couldn’t shake the comparison.

The service itself was dull. Neither the rabbi nor Weinstein made any attempt to engage the participants in questions or debate. And they barely addressed the unstable post-revolutionary situation, as if this were any other Passover, in any other place. Even the appearance of the American ambassador shortly before the service failed to instill any enthusiasm in the room.

After the ceremony was over, we stood and lined up for food laid out like a corporate buffet on serving tables. We loaded typical Egyptian fare onto our tiny plastic plates, and ate it with tiny plastic forks and knives.

It ought to have been the most memorable Seder I’d ever attended, yet I felt empty. Should I have expected more, or less? An assortment of people had come together to watch a spectacle: Passover being celebrated in Egypt. It turned out that irony wouldn’t be enough to bring meaning to the evening.

I introduced myself to Weinstein after the meal. I had been working as a journalist in the country for about a year, and was researching a story about the Egyptian Jews. Yet due to the uncertain political environment, Carmen was wary of journalists exposing the community to danger. After initially agreeing to let me interview her at a later date, days later she abruptly cut off contact and prevented me from interviewing any other Egyptian Jews.

Weinstein died in April of last year, after nearly 10 years of leading the community. She had fought to restore and retain Jewish historical artifacts in Egypt, and keep together the small Egyptian Jewish population, which consists of about 20 elderly women. Buried with her is the memory of a once large and vibrant Jewish community, one that wasn’t forced to celebrate furtively in a heavily guarded temple.

As we departed, I realized that the synagogue no longer stood as a monument to Egypt’s Jewish population. Instead, it was a symbol of how thoroughly the community’s history had been erased from Egypt’s collective memory. I stepped outside and back into Cairo. Still, no one noticed.

The Irony of Celebrating Passover in Egypt