Why Abbas Was Right to Blink 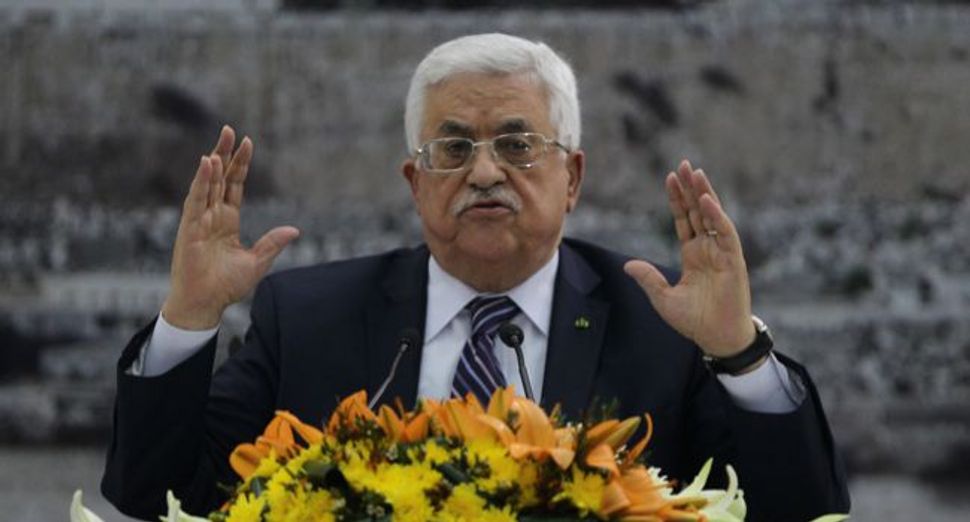 Provocateur? What were Mahmoud Abbas?s motivations for stepping away from the process? Image by Getty Images

That’s the joke anyway — has been for the last fifty years. And it’s what I thought when I first heard that the Abbas government picked now, of all moments, to apply for membership in fifteen UN organizations.

Couldn’t they have waited a month, I thought, until after the current round of peace talks expired? Then they could blame the Israelis for the collapse and garner international sympathy. The pretext they offered – Israel’s non-release of prisoners — hardly seems to justify such an obviously provocative response.

But then I had the good fortune to talk with a number of keen observers of the conflict (my colleague J.J. Goldberg among them) and came to see things differently. Ironically, I came to agree with the Netanyahu government that Abbas wanted to tank the talks. But I also came to think it is the sanest possible choice.

At this point, can anyone still maintain the illusion that the current Israeli government is interested in a negotiated, two-state solution? The Netanyahu government, like many of its American supporters, says this is what it wants. But it’s a TSINO — Two State In Name Only. When it comes to any of the actual issues needed to bring a viable two state solution about — talking about Jerusalem, restraining settlement growth, building confidence on the ground — it demurs.

And, of course, the current cabinet includes several ministers who have gone on record as opposing a Palestinian state. The only scenario for peace is that Netanyahu goes rogue, inks a deal, and then passes it with support from the Left. Has Benjamin Netanyahu ever, throughout his entire career, acted in this way? Is this scenario at all credible?

As AIPAC and others in the pro-Israel Right continually remind us, Israel’s government was democratically elected. And it was not elected to bring peace with the Palestinians. That wasn’t even a central part of its platform; Iran and other threats loomed far larger, and Netanyahu was elected as the stronger, tougher leader on those issues. Over and over again, he’s said that these other issues are more important.

So now, if you’re Abbas, what are your options?

Until a few weeks ago, it looked like the April 30 “deadline” for the current peace talks would come and go without incident. Both sides were in the blame-game spiral, each blaming the other for the collapse. The end seemed near.

But then came Pollard. At the eleventh hour, it seemed as though the Obama administration really did want to prolong the peace process after all. And surely Bibi would take them up on the offer. What did he have to lose? Another year of TSINO in exchange for bringing home a huge prize for the nationalist Right.

This would be a disaster for Abbas. Unlike Netanyahu, the Fatah-led P.A. has staked its credibility (what’s left of it) on the attainment of a Palestinian State. Abbas and Netanyahu have diametrically opposed interests. One was elected to bring about a free Palestine, the other to prevent it.

There is a precedent for this situation: Yitzhak Shamir, who said Yes to extended peace negotiations but earned the nickname “Mr. No” when it came to actually discussing the issues. And that was in the context of an American administration that dared to actually confront Israel. Would Obama/Kerry do the same, with the 2014 and 2016 elections looming in the background? Sure, AIPAC has suffered setbacks and J Street may be ascendant, but has the domestic political calculus shifted enough to allow the lame duck president to really lean on Israel to make concessions?

So, yes, he tanked the peace talks, at the moment that they could have been saved. And he did so by signaling his Plan B: turn to the international community. Now the Israel/Palestine conflict can enter a new, and perhaps more honest, phase. Now Abbas can see whether Europe will side with him, or with Israel and the Americans. It’s a risky gamble, but a risk is better than a sure loss.

A funny thing happened when I posted a bit of this on my Facebook wall. Two friends, one an anti-Zionist BDS-supporter and the other a AIPAC-supporting Likudnik, both agreed that Abbas had no reason to perpetuate the sham talks with this Israeli government. I joked that when the two of them agree on something, it must be right.

Now it gets interesting. With the peace process having failed yet again, will the Obama administration condition aid to Israel on, well, anything? Will it recognize Palestine at the UN? Will international condemnation influence the Israeli public to vote differently next time — and which way? (After all, “everyone is against us” looks more plausible when everyone really is.)

We have no way of knowing what will happen next. But we do know what just happened — and it wasn’t a missed opportunity.

Why Abbas Was Right to Blink