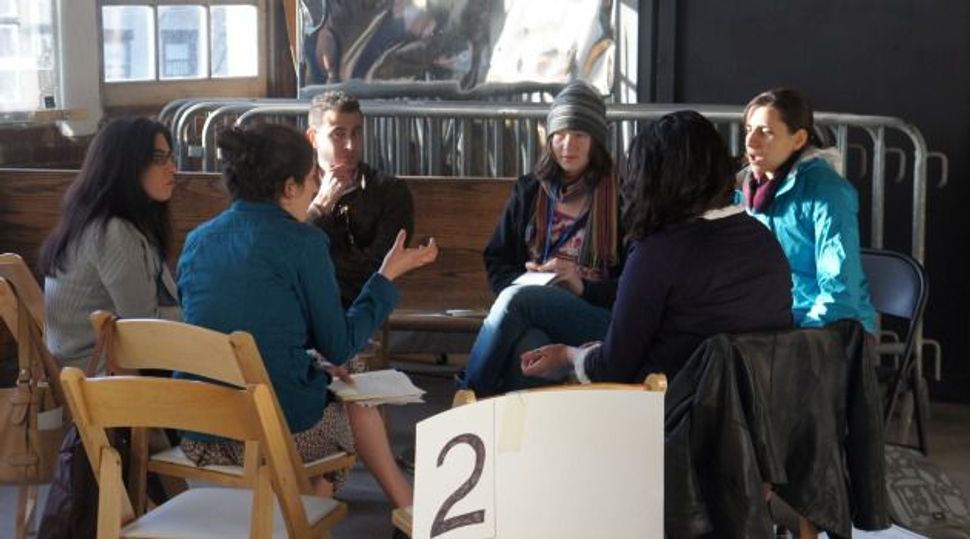 This past Sunday, in the high-beamed, chilly Brooklyn Lyceum, a group of 20- and 30-somethings tried to talk about Israel — no small feat.

The program, called “Resetting the Table,” was designed to allow young people to get together and go really deep, really fast. Guided through the rough waters of this conversation by Eyal Rabinovitch and a team of Facilitation Fellows trained by him and Daniel Silberbusch, the 50 or so young people who showed up were held to communication guidelines that asked, among other things, that they honor confidentiality, listen with resilience, speak with respect and avoid generalizations. Essentially, it asked them to be civil.

And it’s no wonder: this iteration of “Resetting the Table” was funded by the UJA Federation of New York, and is generally part of a broader initiative at the Jewish Council on Public Affairs (JCPA)’s “Civility Initiative.” The model includes two organizing cadres: a group of “Facilitation Fellows” and a group of “conveners.” The Facilitation Fellows, who facilitated Sunday’s conversations, are trained over a period of months to hold these kinds of sessions. The “conveners” are the organizers on the ground, and, coached over many months, are meant to gather their associates at various institutions (from Yeshiva University to Hazon) with the goal of holding facilitated conversation on Israel internally.

The event unfolded unhurriedly: folks trickled in, picked at the marvelous display food from Brooklyn’s new kosher eatery Mason & Mug, heard an introduction from Rabinovitch, participated in an icebreaker, and only then chose their discussion topics, which ranged from “What is the responsibility of American Jews towards Israel?” to “Should there be red lines around who speaks in Hillel, JCCs, and other Jewish institutions?” Then they sat down in sectioned-off corners of the room for facilitated conversation that would last an hour and a half.

The results were mixed. Some groups were heated, like the one on “legitimate and illegitimate criticism of Israel,” where the conversation revolved around the word “apartheid.” Others were dense and emotional, like the one that discussed generation gaps and family conversations. And still others were subdued — not a few participants told me they felt they “needed more conflict.” Two participants I spoke to used that exact phrase, and had come to the event with remarkably opposite expectations: one told me he came because he knew that this conversation wouldn’t “shove anything down your throat” and the other came “looking for an agenda.” The latter told me that the last event he had been to on Israel was run by AIPAC and titled “Fuel for Truth.” This is, of course, not surprising — the group was self-selecting; the act of walking through the door itself suggested a degree of open-mindedness.

But what should probably be remembered is that this kind of event — a relatively short affair from 4:00 to 7:00 on a Sunday afternoon — is a rarity. The Civility Initiative generally does internal programming that spans months, not hours, and is highly tailored to a specific community’s culture, not a random sampling of Brooklyn Jews. And, according to Rabbi Weintraub, part of the reason they primarily focus on processing these issues with existing communities is because “the work can be much deeper over a period of time.”

The most meaningful work, said Weintraub, is when they work with Jewish communal institutions for two thirds of a year, and watch congregants “go from seeing Israel as a subject to be avoided at all costs, to seeing their synagogue, JCC, or other Jewish institution as the place they go to have hard, important conversations about Israel.”

And it’s more than just the time; they do a wide range of programming — from surveys to communication skill building to story exchanges. Weintraub explained that while some of these pieces can feel “soft” at first, they each function as a brick in the foundation laid for the tougher stuff. In her words, building a community with a “foundation” has far more “resilience” — a “culture of conversation and listening” can help people “have disagreements more skillfully.”

It’s hard to argue with the idea that changing the American Jewish conversation about Israel today — which Weintraub has characterized as fraught with avoidance, antagonism, and echo chambers — requires slow, steady, institutional change. All its deliberateness and composed, civil, facilitated conversation provides a venue for people to argue from a place of lived experience. It grounds them in compassion and recognition of what is at stake for others in the issue of Israel.

And the truth is, even what some called a “soft” conversation can be powerful and connect people. One participant told me he happened to share a small group with someone he knows from his Brooklyn synagogue — they had never had a conversation about Israel, but now they would. It took a Brooklyn arts space, kosher kale, and some structure for them to rediscover each other.