7 Coolest Haggadahs for Your Passover Seder 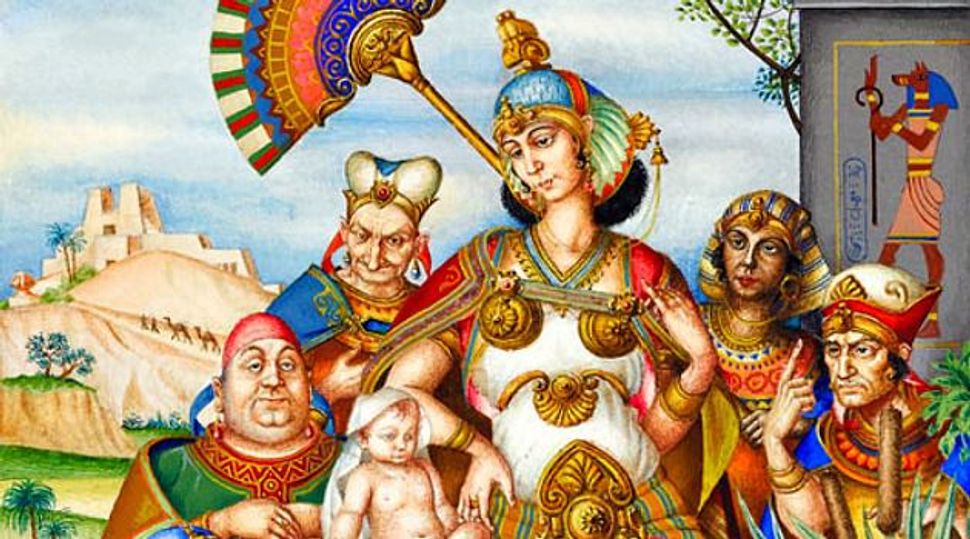 This 14th century Haggadah is the earliest known Ashkenazi attempt to artistically depict the story of Passover. It’s a pretty creative retelling of the story, mainly because the people depicted in the story have the heads of animals — hence the manuscript’s title, “The Bird’s Head Haggadah.” This is believed to have been an attempt to avoid displaying a “graven image” alongside a sacred text. It’s also the first text to include the baking of matzo in the Exodus story. The images are not extraordinary, but you can imagine that it was a pretty big deal at the time it was published.

Seder books have evolved over the years in no small way. But if there’s one Haggadah that served as a prototype for books later to come, it was the the Gershon Cohen Haggadah, published in Prague in 1527. This book wasn’t the first illustrated Haggadah, nor was it the first one copied using the printing press. But it was the first, so far as we know, to prove that the contemporary printing method did not have to come at the expense of the evolved tradition of decorating the text. Gershom ben Shlomo Ha-Kohen’s beautifully decorated Haggadah used printing woodcuts and was the first printed Haggadah to include “Adir Hu.”

3. The world’s most beautiful Haggadah

The Szyk Haggadah is considered one of the most beautiful Seder books out there. Though published in the 20th century, the book, hand-lettered and hand-painted, harkens to the illuminated manuscripts of the Middle Ages. Drawn up amidst the rise of the Nazis, Arthur Szyk’s book draws a parallel between the Third Reich and the Ancient Egyptians. In an early sketch, Hitler’s mustache reportedly appeared on Pharaoh’s face. He had a hard time finding someone to publish the manuscript, even after fleeing to England. But after years of financial stress, his friends helped him sell 250 editions of the book for $500 each. Today, a deluxe edition costs nearly $9,000.

4. The world’s most valuable Haggadah

According to some, this might be the most expensive Hagaddah out there – and for good reason. The Sarajevo Haggadah, insured for $7 million, is one of the oldest Sephardic Haggadahs and one of the most beautifully decorated too. The book begins with 34 pages of illustrations that beautifully tell the story of the Bible, beginning with the creation story and ending with the death of Moses. It was sold to the National Museum of Bosnia and Herzegovina in Sarajevo in 1894 and continues to live there on display. The Haggadah has dodged more than a few bullets over the centuries. During the Holocaust, as Nazis confiscated countless Jewish ritual items, a Muslim cleric kept the book safe. You can purchase reprints of the Sarajevo Haggadah on Amazon (disclaimer: $150+).

On the first anniversary of Martin Luther King’s death and amidst an environment of anger and despair, Arthur Waskow published this Haggadah to portray parallels between the “historic imperative of Jewish liberation and the urgency of today’s black rebellion.” Waskow is associated with the Jewish Renewal movement and has been involved with anti-war and other liberal political causes. According to the Shalom Center, The Freedom Seder is the first Haggadah to link stories of Jewish liberation with that of the African-American struggle. The Haggadah has prompted a genre of social justice Haggadahs. Today, there are Haggadahs addressing gender and sexuality, oppression, genocide, the Palestinian-Israeli conflict and more. Waskow’s Haggadah was published in 1969 in the leftist Ramparts magazine and first initiated that year in the presence of a number of African-American and Jewish community leaders.

6. Haggadah for the modern day

New Haggadahs are always popping up. Some of them don’t get too much attention. But Jonathan Safran Foer’s New American Haggadah has risen to the top of recent endeavors. His Seder book includes time for discussions and has a few blank pages towards the end to allow participants to jot down their thoughts, in an effort to have Jews really contemplate the subjects at hand. Its images are drawn by the Israeli artist Oded Ezer and include commentary on the traditional text from people like Jeffrey Goldberg, Lemony Snicket, Rebecca Newberger Goldstein and Nathaniel Deutsch. The English translation, provided by Nathan Englander, is meant to convey the spiritual crux and depth of the text that has supposedly been lost in many English translations. Foer has said that he created the new Haggadah in an effort to revive the tradition of meaningful Passover Seders.

So there are a lot of Haggadahs out there. Options for your own Passover seders range from the traditional text and the incredibly dry Maxwell House Haggadahs to the creative and contemplative editions that try to make Passover more relatable to the modern day. Some of the wonderful works cited above may be beyond your price range, but a few of them are actually available in modern editions. But if, at the end of your search, you don’t find any to your liking, it’s worth noting that modern technology has made it possible to design beautiful and high-quality Do-It-Yourself Haggadahs. They totally beat out the ones I drew in crayon in pre-school.

7 Coolest Haggadahs for Your Passover Seder