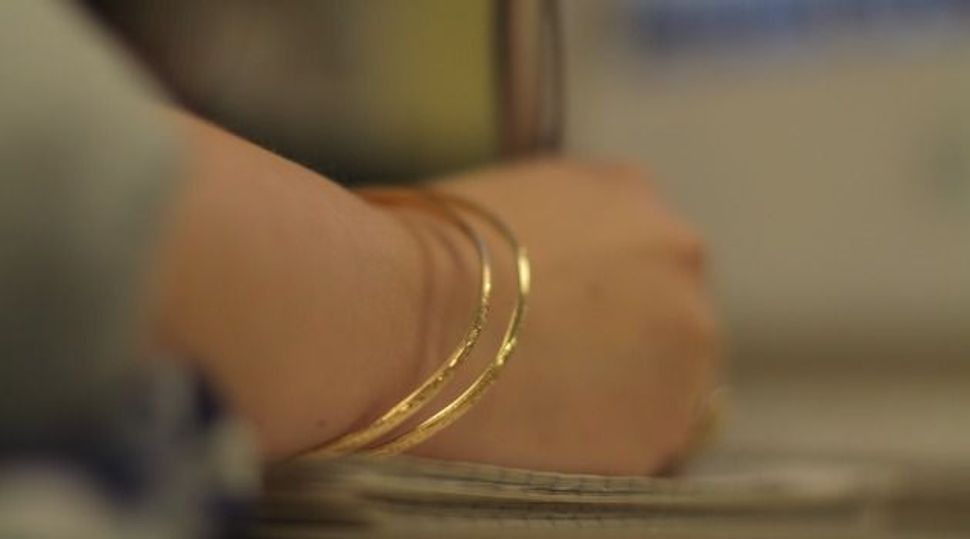 Editor’s note: Whether it’s a silver kiddush cup, a siddur that survived the Holocaust, or a wedding ring — heirlooms tell the story of our families. Please share your Jewish heirloom stories with us below by April 25. Several submissions will be featured in the Forward in May.

In my family, we call our grandmother (at least) once a week. A reminder clinks around on my wrist almost every day.

When I was 12 years old, nearing my bat-mitzvah, my mom and grandmother sat me down and presented me with two gold bracelets — sturdy, but thin, carefully engraved with a vine-like pattern. “Don’t lose them,” they said. (Confession: I did, for about two years. Sorry, Mamie.)

My mother had gone through the same rite of passage, and my grandmother before her. The bracelets have been passed down from eldest girl, to eldest girl, brought to Montreal from Morocco, where my great-grandfather purchased them for my grandmother for her 7th birthday, in December 1944.

The gold engravers of Marrakesh were known for their craftsmanship, my grandmother recently told me.

Both my parents were born in Morocco, my father in Meknes, my mother in Marrakesh. In the early 1970s, when so-called “Arabization,” and nationalism forced many Jews to leave the country, my mother’s family followed.

My grandfather, who owned a series of factories, smuggled what he could out of the country. He never returned. My mother wasn’t allowed to tell her friends that they were leaving — they wished her a good two-week vacation, and never saw her again. But the bracelets came along (I like to think they were on somebody’s wrist, though no one can actually remember).

They were definitely on mine as my voice cracked mid-song during my bat-mitzvah, when my limbs shook as I eulogized my grandfather at his funeral, and as I write this now.

They’re a constant (and rather noisy) reminder of where I come from. Of my family, of my mother and of my grandmother, who wore them first.