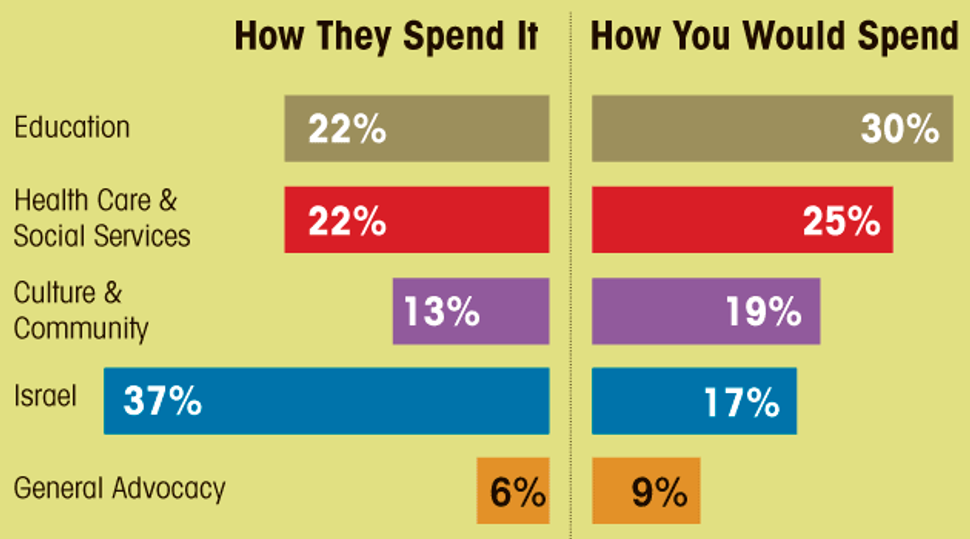 Do the spending priorities of American Jewish charities match those of American Jews? Judging by an informal but highly revealing poll of Forward readers, the answer is no.

As in: spend more money on education, culture and community, about the same on general advocacy and much less on Israel.

The Forward’s poll grew out of our groundbreaking series on the Jewish charitable network, in which we analyzed newly released tax documents filed by 3,600 not-for-profit organizations to better understand an ecosystem with assets of roughly $26 billion. The largest share of donor money outside the federation system goes to organizations that focus on Israel, with health care and social services second and education third.

But when we asked readers to register their choices in an online poll, more than 200 responded with a dramatically different list of priorities. Education leaped to the top, while Israel dropped to fourth place.

We won’t pretend this is a representative sample of American Jews, but that shouldn’t obscure the powerful message from ordinary readers who, after all, have little opportunity to enunciate their priorities when mega-donors are able to exert so much communal power. And it comes at a time when the Israeli economy is strong and the Israeli government is reimagining it own relationship to Diaspora Jewry to the point of planning to send hundreds of millions of dollars here.

The near-hysteria about Jewish continuity that accompanied the publication of the Pew Research Center’s survey last year has abated, but the challenges posed by assimilation, intermarriage and alienation remain. Jewish education in all its many facets remains the most efficacious way to maintain and strengthen the Jewish people. American Jews proudly helped to build the State of Israel. Now we need to focus on people-building back home.