The One Move That Might Save Mideast Peace Talks 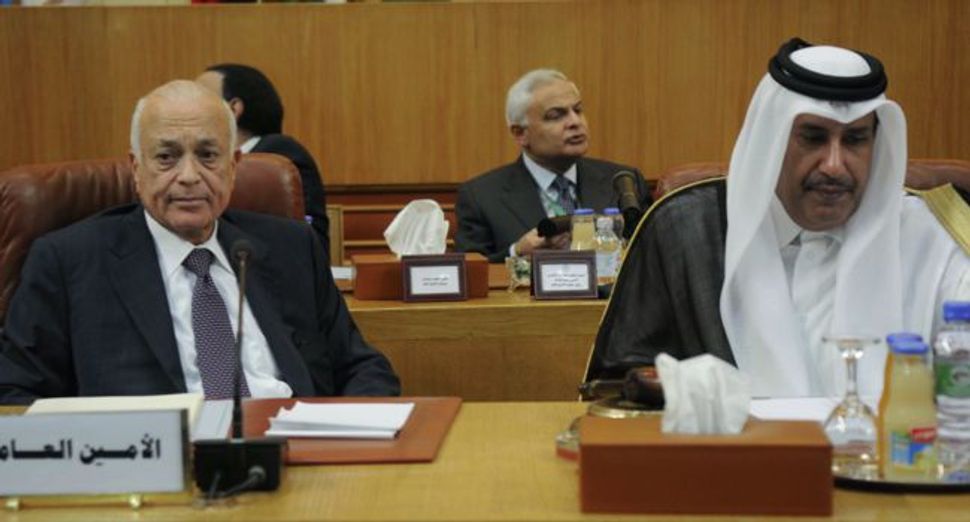 Whatever else might come of Secretary of State John Kerry’s tottering Middle East peace effort, it will leave behind an intellectual legacy in the form of a new addition to the lexicon of high-stakes diplomacy: “Poof.”

That’s the word that the secretary interjected into his April 8 Senate testimony, while narrating the missteps that led to the breakdown in Israeli-Palestinian negotiations, to designate the precise moment when the process went kablooey.

It was a moment that observers around the world, the cynical ones, at least, had been awaiting with morbid anticipation since the talks began, like a movie audience waiting for the runaway train to crash. There were those who hoped Kerry knew what he was getting into, that he had serious grounds for believing the two sides could find common ground, if not in the nine months they’d agreed on then at least in some follow-up round. But as time went on that seemed less and less plausible. To paraphrase Kerry, a month went by, and then two months, and now — poof, we’re here.

In the end the big question wasn’t what the final peace agreement would look like, but who would be blamed when there wasn’t one. Israel looked like it was going to avoid getting stuck with the hot potato since it was the dispirited Palestinians who first indicated that they didn’t want to extend the talks past the April 29 deadline, while Israel seemed amenable.

On March 29, though, Netanyahu decided to please his restive right flank by withholding the fourth round of Palestinian prisoner releases he’d promised last year as a gesture to get the talks going. Things started to snowball. Abbas used the canceled prisoner release as an excuse to abandon his own pre-talks gesture by signing 15 United Nations conventions in the name of the sovereign state of Palestine that the General Assembly recognized in 2012.

That might have clinched the Blame Game in Bibi’s favor. But within hours of Abbas’s April 1 signing ceremony, Israel spoiled its own victory: Its housing ministry approved tenders for 708 housing units in the Gilo section of East Jerusalem, built on land Israel captured in 1967.

That was Kerry’s “poof” moment. Both sides, he conceded, had “wound up in positions where things happened that were unhelpful.” But he singled out Israel’s actions, skipping the prisoner release and issuing the tenders, as the breaking point.

The State Department later pointed out that Kerry didn’t mean to blame Israel. He’d called both sides “unhelpful.” Nobody was fooled, though. It was Israel that got “poofed.”

Then again, the talks could collapse decisively, now or in a few months. If history is any guide, that will lead to a sharp deterioration in Israeli-Palestinian relations — a spike in violence; escalating pressure from the U.N. and Europe; and conceivably a collapse of the Palestinian Authority, which would put Israel back in the expensive and dangerous business of running the West Bank’s schools, post office, social welfare agencies and policing.

If things do deteriorate, Secretary Kerry will have to explain why he started a process he couldn’t finish, knowing that a failed Israeli-Palestinian negotiation can be worse than none at all. In this scenario, the big loser in the Blame Game will be Kerry himself.

Most of all, Kerry is to blame for forgetting one of the most commonplace truths about Israelis and Palestinians. On both sides, majorities of perhaps two-thirds would be willing to accept a compromise solution that meets the needs of the other side. The trouble is that majorities on both sides are convinced that the other side doesn’t mean it. Neither side is willing to make the extreme sacrifices necessary to meet the other side halfway because they don’t believe it will be reciprocated.

It’s often said that Israelis are waiting for another Anwar Sadat to come to Jerusalem and address their better nature. It’s not likely that they’d take the Palestinian leader seriously. But they might sit up and listen to leaders of the Arab League. If, say, the foreign ministers of Saudi Arabia, Morocco and Qatar were to come to Jerusalem and speak to the Knesset, it could turn a lot of Israeli hearts. Even better, they could come and discuss the Arab Peace Initiative, the 2002 document that offers Israel peace, end of conflict and normalized relations with all Arab countries on condition that Israel withdraw to the 1967 armistice line — or its equivalent — and negotiate a “just” and “agreed” solution to the problem of Palestinian refugees. The document was adopted unanimously at an Arab summit in Beirut in 2002. It’s been reaffirmed three times, and under American prodding some aspects were softened last year. Surveys show that about three-quarters of Israelis have never heard of it.

The foreign ministers of Egypt and Jordan visited Israel last May, representing the Arab League, to discuss the initiative. The league had decided that the message should be delivered by countries that already have relations with Israel. But a visit from those two countries isn’t news any longer. It got no attention. On the other hand, a visit from a Saudi prince accompanied by a Moroccan leader could have enormous impact.

The foreign minister of Qatar, who chairs the league’s peace initiative follow-up committee, met with Kerry twice last year, leading a delegation of Arab foreign ministers. They discussed details of the plan, agreed to soften some provisions and pledged to stay in touch. But no plans were made for a Qatari visit to Israel, where it could make a difference.

That’s where Kerry’s pressure would be useful. Instead of flying back and forth to Jerusalem and Ramallah to move the mechanics of negotiating a few inches forward, he should be leaning on the Qataris, Saudis and others to go and talk to the Israeli people.

They’re the ones who could break the impasse. Kerry’s had a year to deliver the people who could touch Israel’s heart. But, you know, nine months have gone by, and poof — now we’re here.

The One Move That Might Save Mideast Peace Talks