The Real Exodus of Passover — on JetBlue to Miami 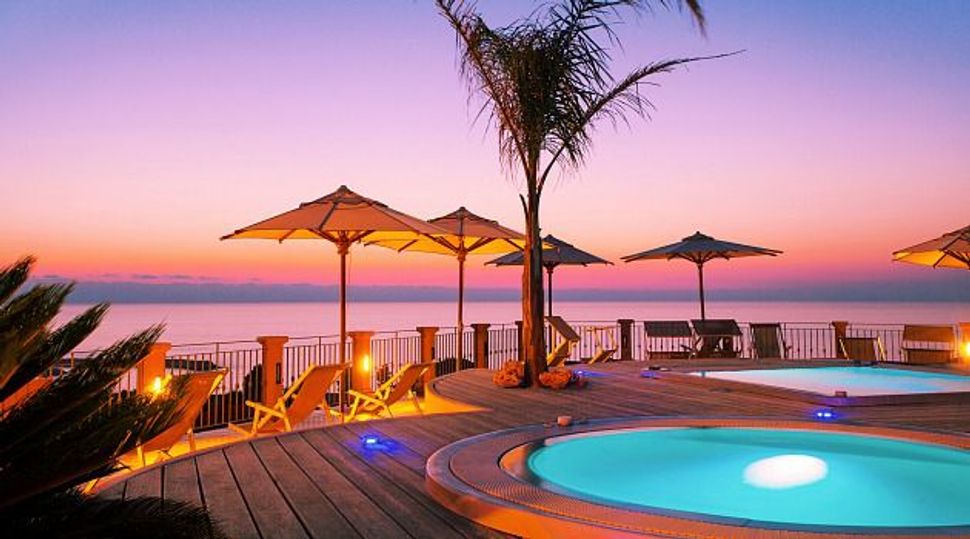 I’m about to embark on a little Exodus of my own. I’m leaving New York City and flying straight to Miami Beach for Passover, which is where my parents live.

What? You don’t feel bad for me? Much like the Jewish nation accepting the holy Torah at Mt. Sinai, Miami Beach represents sacred ground; a spiritual awakening and reward apart from work and home. It’s the getting there part that really bites. Packing isn’t any different than choking down a few spoonfuls of bitter herbs, and flying on a 767 with my Jewish homies, is like being held hostage inside of a small daycare with a couple of rabbis nearby. Not that I don’t adore children; I’ve got one of my own and if we’re on your plane, well, I sincerely apologize in advance.

Months before Passover, which coincides with spring break, airliners, sensing opportunity, add zeros to regular ticket prices. At least it almost always seems that way. My baby boy, who is under two years of age and weighs in at a healthy 30 pounds, (he’s like a miniature super-human sumo wrestler) doesn’t require his own seat yet, so he’ll be bunking with mommy and daddy. Or, just daddy. (Cue the evil laughter). Once again, I apologize in advance.

Anyway, back to the Exodus stuff. Every year before Passover, I warn my husband that I will not be packing for him, because he is a big boy and should be able to manage on his own. Of course, every year, I end up packing for him, loudly calling for him above the television to prepare the cell phone chargers or the toothbrushes, as if this is the most important task in the world and our entire trip is riding on the proper stashing of our toothbrushes.

This for me, is often the equivalent to my packing for him. Toothbrushes can be surprisingly frustrating. Tiny T-shirts and pajama sets quickly occupy the remaining space in our suitcase, and plastic bags protecting dresses and dress pants picked up from the cleaner’s that same afternoon lay above the rest.

Satisfied with my work, I retreat to folding the towels I have just retrieved from the dryer. I’m humming the Sophia the First theme song when I notice that it’s eerily quiet. I step into the bedroom and meet the mischievous gaze of my son.

The contents of the perfectly packed suitcase are now strewn across the floor, piled into drawers, and one chubby foot is pushed into a red high heel. Oh, and there’s giggling. Loud giggling to match a positively smug smirk. It’s all part of the Exodus, I tell myself. I must be like Moses and lead the way to Miami Beach.

I will overcome this Passover madness. I am unstoppable.

JetBlue, Delta, and American Airlines. The flights have been booked, the bags have been packed, and the snacks have been stowed. While approaching the gate, I find myself thinking of the Aretha Franklin song, “Chain, chain, chain” only to replace the title with “Jews, Jews, Jews.”

The crunching of silver foil followed by little fingers unwrapping soggy tuna sandwiches is unmistakable. We have arrived. Apparently, some of these people haven’t yet heard of Listerine strips. Meanwhile, JetBlue fliers hit the shelves to scour for Kosher Sibo sandwiches and interesting sounding wraps, fearful that they may otherwise starve within the 3-hour duration of the flight. Hey now, some of us like to know what we’ll be missing out on with all that matzoh coming our way.

Still don’t feel bad for me? Cooking for Passover is a workout. There’s peeling, frying, baking, boiling, and a whole lot of Idaho potatoes involved. Halfway into my second bag of potatoes, I start talking to them because I’ve gone crazy and maybe I am also a potato.

It’s not easy to supervise while my mother is doing all the hard work. One might assume that in following all of the potato handlings, potato kugels and mashed potatoes may cause one to feel sick at the mere thought of consumption. Not the Jews! We pack it in like nobody’s business. We eat like we’ve been wandering through the desert for 40 years without the manna!

There’s more people. Ever watch the “Real” Housewives of Miami? Television, specifically those self-proclaimed and carefully convoluted reality shows playing on Bravo, offer a distorted sense of reality by promoting and airing hour long segments depicting a group of perfectly made up women with tiny waists running around in bikinis all day, throwing back martinis with a side of drama for dinner. Well, what about the Jewish Housewives of Miami?

Some of these women spend weeks cooking for Passover, enduring a bit of their own kind of backbreaking labor, packing freezers with 9-by-13 tinfoil pans, each carefully covered and labeled. The bubbies, too! The married children who fly in to be with their parents for the holiday claim stoves and dishes they will be responsible for — only to sit on their tuchuses prepared to casually lounge around poolside to enjoy a breezy vacation. They are so busy with their own children, they barely lift a finger at the table! By the time the intermediate days roll around, the cooks feel a little like the slaves back in Egypt. Forget about the Red Sea, these women can only see red!

If you’ve never been to Collins Avenue during Passover, it’s almost like a tsunami of Orthodoxy poured into about 10 hotels, which have specifically been made kosher for Passover. Different sects, different styles; Passover is a veritable UN in variances of religious observance.

These visitors are the New Yorkers or the out-of-towners, roaming around Miami with their unevenly sunburnt faces, baseball caps perched atop their kippah-clad heads, smiling because they’ve been breaking out the khakis and the flip flops.

Don’t be fooled by the women in their jean skirts and New Balance sneakers, either. Many of them are powerhouses of Jewish business, philanthropy, and community life in New York City, going incognito. Come Passover, no matter how glamorous, they too will be eating five meals a day and ziplocking chocolates into their purses from the T-room just like everybody else. Freshman 15? We Jews should enact the Passover 15! Diet, schmiet, it’s like a smorgasbord in there!

As I peer down at my now empty suitcase, I begin to reflect on Passover of year’s past. Sipping the four glasses of wine, flaming red cheeks, too loud laughter around the table, the squealing voices of my nieces and nephews, and all that Passover jazz. Perhaps Passover is less about the Exodus and more about our homecoming. Our nation inched their way through the desert, until they finally reached the other side: celebrating their rebirth as a Jewish people and gifting of the Torah at Mt. Sinai. With the sun blazing across the sky successfully burning my pale arms, munching on spelt matzoh or potato stix, my own adventure doesn’t seem so different a journey, now does it?

Calm down people, I’m only half joking. I genuinely feel blessed to be spending the holiday with my family and friends down in Florida. In fact, I think it’s going to be my favorite Passover yet.

Traveling there may turn out to be half the fun. I break into my blue chips and wave the stewardess over while she’s passing through. “Excuse me, Miss. Got any extras back there?” Pass them over here. It’s going to be a long flight home.

The Real Exodus of Passover — on JetBlue to Miami