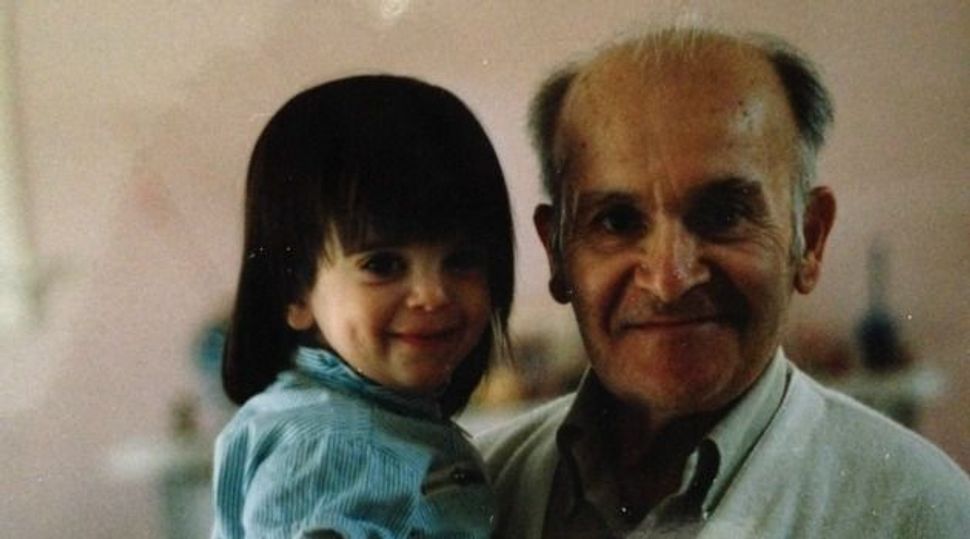 The author and his grandfather / Courtesy of Hody Nemes

The Exodus happened 3,000 years ago. But today, in the year 5774, we are still supposed to see ourselves as if we had experienced slavery and left Egypt, according to the Haggadah.

For me, that’s always been a tall order.

In order to feel like a slave, I wanted to know the details of individual slave life. What emotions did a Hebrew slave feel as the taskmaster walked by, holding a whip? Did he love the land of Goshen, the only home he knew – or did he curse it? Did he sing songs as he worked? Was he too tired to dream of freedom? The book of Exodus is remarkably silent on these questions.

But sometime in my childhood, I realized that the Exodus wasn’t as remote or as faceless as I thought it was, because I knew a former slave. His name was Hersh Nemes, and he was my grandfather.

Hersh was born the year after World War I ended, and spent his childhood in Eden – a Transylvanian village far from the memory of war, so small it appears on no maps, surrounded by apple orchards and barley fields. A spring ran from the hillside beside the home he shared with his siblings and parents, who were farmers.

But even there he could not escape the darkness slithering east from Germany. In 1941, the Nazi-allied Hungarian regime conscripted him to serve in the army’s labor service, a forced labor system for Jews and political prisoners. Tens of thousands of Jewish men served in these forced labor battalions, which essentially worked as slaves for the Hungarian armed forces as it attacked the Soviet Union. Few survived the Russian winters and bombs, rampant disease, and the sadism of the Hungarian commanders.

One Pesach Seder night, years after my grandfather’s liberation, my father asked him if he could recall any particularly memorable Passovers. “Sure,” Grandpa said. “The ones when I was a slave.”

On Passover 1944, 70 years ago, my grandfather was not at a Seder table; he was shivering in a ditch somewhere along the ever-shifting eastern front. Each day, the rumble of Russian artillery grew closer, and increasing numbers of planes strafed his battalion.

This was his third Seder in captivity. He owned no Haggadah, no matzo, no wine – in fact, no food at all. He had no words. On that night, he did not tell the story of slavery, because he was a character in it.

Hundreds of miles away, in a house perched upon the Carpathian foothills, his family held a meager wartime Seder, unaware that it would be their last together. Seven weeks later, on the first day of the festival of Shavuot, their train arrived at Auschwitz. Mengele sent Hersh’s parents – my great-grandparents – and two of his siblings to the gas chambers.

A few months after Passover 1944 – when he was 24, the age I am now – my grandfather encountered Stalin’s troops. Instead of freeing him from servitude, they declared him a prisoner of war and sent him to the Soviet gulags. First he endured frostbite in a brutal Ukrainian mining camp, and later nearly starved to death in a prisoner of war camp in Odessa.

I deeply identified with my grandfather’s story. Through it, I felt I gained a sense of the particulars of slavery, and a way to access the Exodus story. But I now realize that my understanding was quite flawed.

Because far from being horrified by his experience of slavery, I glamorized it.

I viewed his saga as a series of adventures, and dreamed of turning it into a film or novel. There was the time he was caught stealing food from a Russian commandant and somehow escaped a certain death sentence. Or the tale of the mine collapse, when he only survived because another P.O.W. glimpsed his boots sticking out from the rubble. Or his tearful, chance reunion with his remaining brother at a Haifa bus station.

As I entered my twenties, I grew to identify even more with my grandfather’s story. His wartime epic began when he was 21 and continued until he was almost 30. With each birthday, I think of where he was and what he endured at my age. Though it’s hard to admit, part of me wanted to have a life as interesting as his had been, as wild and exciting and redemptive.

Some of my naiveté was a product of my grandfather’s own reticence. He loved to tell stories about his experiences in the war, but he was usually careful to edit out any raw gruesomeness or horror. He vaguely told my father that he faced the angel of death constantly, surrounded by the dying and the dead, but all I heard were stories with happy endings.

As I sit at the Seder table this year, I will think again of my grandfather, who passed away 10 years ago. As I envision myself as a slave, I will remind myself of the unnamed miseries he endured in slavery.

But I will also remember his years of freedom, which I’ve often overlooked because they had always seemed so much less exciting. After he was released from the gulag, his life, put on hold for a decade by war and servitude, could finally move forward. After a brief stay in Israel, he married my grandmother and moved to Indiana, where he raised my father and uncle. He opened a liquor store and worked for a decade as a janitor in a middle school. He lived out the rest of his years in a ranch home in a quiet suburb in the American heartland, where he had everything he needed: a family, a house, food, a Jewish community, and a vegetable garden that reminded him of his birthplace.

His life after the war wasn’t glamorous or death-defying, but he was free – and he was happy.

This year, I’ll celebrate a Seder with my family in another suburb in the American heartland. This Seder won’t make for an epic tale to tell my grandchildren; I won’t spend the holiday in a ditch along a battlefront, shivering and starving. But that’s okay. The experience of freedom isn’t always thrilling – but it makes possible the pursuit of happiness. As I envision myself leaving Egypt tonight, I’ll give thanks that I live a life unencumbered by war, that I am free.