When Jesus Died at Auschwitz 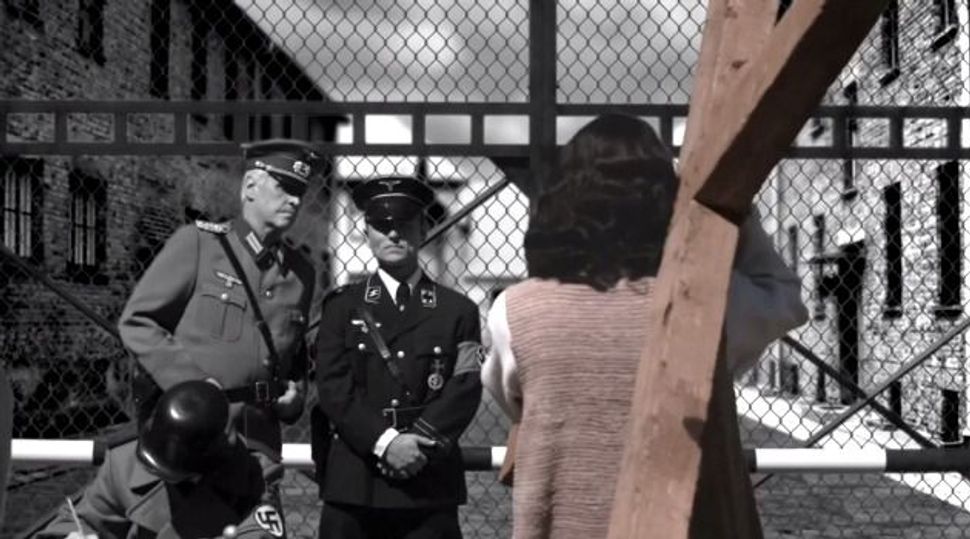 The most tasteless YouTube video ever has just been released – by our friends at Jews for Jesus. Entitled “That Jew Died for You,” it is – I am not making any of this up – a three-minute video showing Jesus Christ among a group of Jews arriving at Auschwitz. And you thought the Easter Passion Plays were offensive.

According to Jews for Jesus, the video was made because “Jesus has often been wrongly associated with the perpetrators of the Holocaust.” The film, which includes Jesus helping a Jewish woman when she stumbles during a forced march and, later, being selected for the gas chambers by a Mengele-like Nazi, is meant to clear that up. Actually, Jesus was “just another Jew,” and suffered with the Jews in the Holocaust.

A “making-of” video available on thatjewdiedforyou.com elaborates: “The Holocaust, perhaps more than any other event or topic, has kept Jewish people from being open to considering Jesus as the Jewish messiah.” If only we didn’t blame Christians for the genocide of our people, the reasoning goes, we’d be more open to converting to Christianity.

So much of this project is so ludicrous and so offensive, it’s hard to know where to begin.

Let’s start with the reminder that Jews for Jesus is a front. Yes, there is a handful of messianic Jews out there. But they are propped up by about $15 million in annual donations from evangelical Christians and congregations. (That figure is for Jews for Jesus alone; there are actually several such organizations.) J4J does not exist to meet the pastoral needs of messianic Jews. It exists to convert Jews.

Given that message, it’s hard to fathom who thought this project would be a good idea. Any Jew with personal, familial, or even historical memories of the Holocaust will immediately find it to be an outrage. Not to state the obvious, but it desecrates the memory of six million Jews to use their suffering as a way to convert Jews to Christianity.

And then there’s the theological message itself. J4J is so enmeshed in its Christian universe, its leaders seem unable even to understand that Jews see the world differently. Ending with a selective mistranslation of the “suffering servant” passage from Isaiah 53, the film implies that Jesus was killed, by the Nazis and/or the Romans, for our sins. Of course, if that substitutional theology were true, why did six million Jews also have to die? Couldn’t Jesus have saved them the trouble?

I also have to say something about the cheesy style of the film itself. Shot in black and white – except for Christ’s cross – it is so low-budget, so corny, and so poorly produced as to evoke laughter, not solemnity. A handful of bad actors, well-scrubbed, well-coiffed and often model-gorgeous; cheaply-sewn Nazi costumes and clichéd yet utterly improbable Jewish peasant wear; and, of course, the sentimentality of the music and visuals – That Jew Died for You is of a piece with Son of God and other nouveau-Christian films, their style so naïve, unreconstructed, and un-ironic as to seem almost camp.

It doesn’t take a Lenny Bruce to recognize this mode of sentimentality as quintessentially goyish. That Jew clearly evokes Schindler’s List in its attempted aesthetic, but its style is ham-fisted and over the top. It has the swell of Christian sentiment to match its Christian theology.

Coming as it does at a time of historic Jewish persecution – not to mention this week’s shooting in Kansas – the film is an insensitive, blundering effort to leverage Jewish tragedy into Jewish converts. Ironically, it is so offensive that I think it could be used to keep Jews Jewish. Someone call Federation…

When Jesus Died at Auschwitz