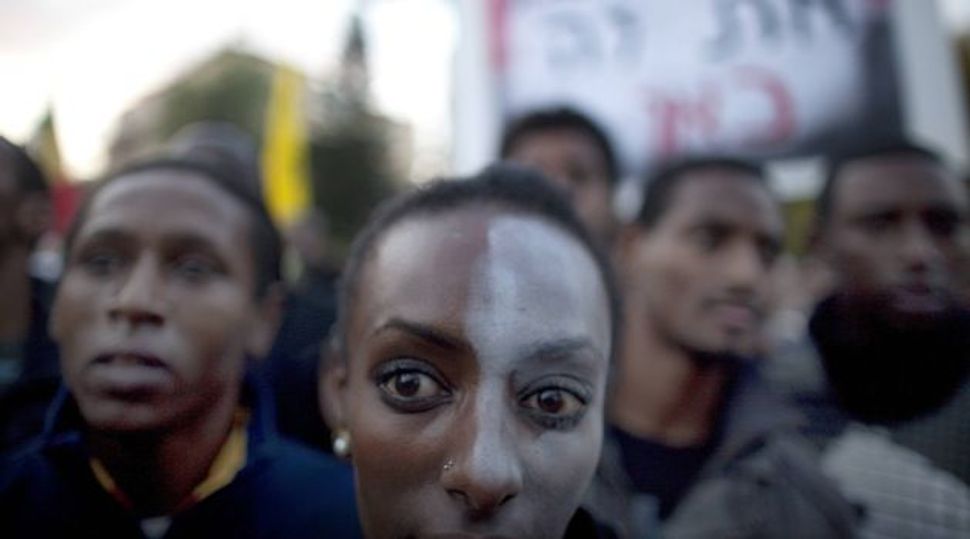 Black and White: An Israeli Jew of Ethiopian origin, with a painted face, takes part in a January 2012 protest in front of the Knesset against racism and discrimination. Image by Getty Images

Late in March, Ebony magazine apologized after one of its senior editors made a racially charged dismissive comment on Twitter. Last November, two students at Lee University apologized for wearing blackface, with one noting, “We are deeply sorry for those we have upset.”

Two recent incidents in Israel mirror these events, but the result was diametrically opposite. On December 22, Haaretz writer Gideon Levy, in a column ostensibly devoted to confronting anti-African racism, claimed that Israel had “a million immigrants from Russia, a third of them non-Jews, some of whom were also found to have a degree of alcohol and crime in their blood.” Called on to apologize, Levy posted a response in which he claimed that “Russian olim in Israel were offended and furious and they accused me, of all people, of being a racist.” He heaped more scorn on Russian Israelis, stating that “many of those who recently moved to Israel from Russia have not done so for Zionist reasons.”

In mid-March, during Purim, 15 students from the suburban community of Mevaseret Zion dressed up as members of the Ku Klux Klan, and three of their friends wore blackface. A principal of the school defended the actions, according to a report; “the costume was designed to create interesting and important discussions…. This act essentially created a platform where discussion can exist.”

What we see in Israel when it comes to issues of stereotyping in society is generally a collective shrug of the shoulders. Discriminatory actions are regarded primarily as a problem of the victims, who are deemed “incensed” but not taken seriously. And not as a societywide issue. Deeply offensive actions, such as dressing up like the KKK in a community where there are numerous Ethiopians, is poked fun at, with one paper calling it an “epic fail.” Surveys show that Israelis tend to be insular in their views of diversity; a 2013 Israel Democracy Institute survey found that 47% of Jews did not want to live next to an Arab family, while 41% of Arabs didn’t want to live next to Jews. Commentators tend to see this as evidence of a society that is increasingly fraught with racism. But an examination of a history of ethnic and race relations in Israel, focusing particularly on mass media, tends to show that the problem is deeply rooted in the past. Contemporary society has never confronted this history, and it cannot begin the process of learning from it.

A little noticed 2011 book by academic Etan Bloom revealed that the father of Israeli sociology and a leading Zionist of the British Mandate named Arthur Ruppin, was a believer in eugenics. In 1919 he argued that the Jewish race should be “purified” and that it was “desirable that only the racially pure come to the land.” As head of the Palestine Office of the Zionist Executive (later the Jewish Agency for Israel), he put his purity schemes into practice, arguing that Ethiopian Jews should not be permitted to immigrate, because “they have no blood connection,” and arguing that Yemenite Jews should be brought only for menial labor.

Ruppin and his fellow travelers were able to influence the Zionist movement, tragically in retrospect, to view non-Europeans as a different caste and to back up their arguments with outdated theories of eugenists. For instance, Chaim Sheba, who became director general of the Health Ministry in 1950, argued, according to a 2005 report that “a high concentration of those ill in body and soul would jeopardize the future of Jewish community in Israel. To support his argument, he used examples from genetic theories which purported to show national gene pools weakened through a lack of genetic vigilance.” Sheba was influential in temporarily preventing Cochin Jews from immigrating. The communist newspaper Davar asserted that a community “with numerous sick, decadent, unrestrained elements will not withstand the social and security test.” Haaretz writer Arieh Gledblum claimed in 1950 that North African Jews’ “primitivism is unsurpassed…. They have little talent for comprehending anything intellectual” and “lack any roots in Judaism.”

Since the 1950s, this legacy of ethnocentrism has haunted Israel. When the philosopher Hannah Arendt visited Israel in 1961, she described her fear of Jews who “looked Arab but spoke Hebrew,” calling them “an Oriental mob.” In 1981, singer Dudu Topaz castigated non-Ashkenazi Jewish voters as “chachachim,” a derogatory term. In 1983, Shulamit Aloni lambasted Sephardic Shas supporters as “barbarous tribal forces.” Shmuel Schnitzer, a journalist, described in 1995 Ethiopian Jews as “thousands of apostates bearing disease.” Noted author Amos Elon pondered in 1953 what effect Moroccan Jews’ “uncontrolled fertility would have on the Jewish people’s genetic robustness,” and in a 2004 interview he was still claiming that “political primitiveness” came from immigrants to Israel.

This narrative of what Ehud Barak called a “villa in the jungle” has cast an immense shadow over the ability to confront racism in Israel. Stereotyping against citizens who are not considered European-origin “sabras” has been an integral part of the left and right, but ironically in Israel, it has been particularly virulent on the left. Ari Shavit states without compunction in his 2013 book “My Promised Land” that “many Oriental Jews are not aware of what Israel saved them from, a life of misery and backwardness in an Arab Middle East.” Israel Prize winner Anita Shapira’s “Israel: A History” even claimed in 2012 that Jews from Arab countries “were compelled to get used to physical work which in their countries of origin was considered demeaning.”

The discourse in Israel accepts such blanket orientalist and ignorant statements without question. In many respects, the understanding of stereotypes is still trapped in the 1950s. A demonstration on the International Day Against Racism garnered only 40 participants on March 21. Major newspapers don’t feel a need to apologize for printing claims that Russians have “crime in their blood” or that immigrants threaten the “demographic composition of the Jewish people.” People think dressing up like the KKK is “interesting” and consider that it might offend “only” Ethiopians. Jews abroad tend to be more offended than locals, and at the end of the day it is only the locals that can bring about the necessary change. Unfortunately, Ruppin has an academic center named after him, and the architect of the discriminatory “medical selection” policy of the 1950s, Sheba, has an eponymous hospital.

American multiculturalism has generated positive debates about race in society, leading to teaching moments and to acknowledgement of how words, determinist judgments, reductionist arguments, generalizations and behavior create a culture of discrimination and hate. Israel needs a cathartic moment where mass society confronts the demons of the past and the present without denial or excuses. It can all start with a few apologies.

Seth J. Frantzman is the opinion editor of the Jerusalem Post.