How Uganda Helped Me Mark Passover 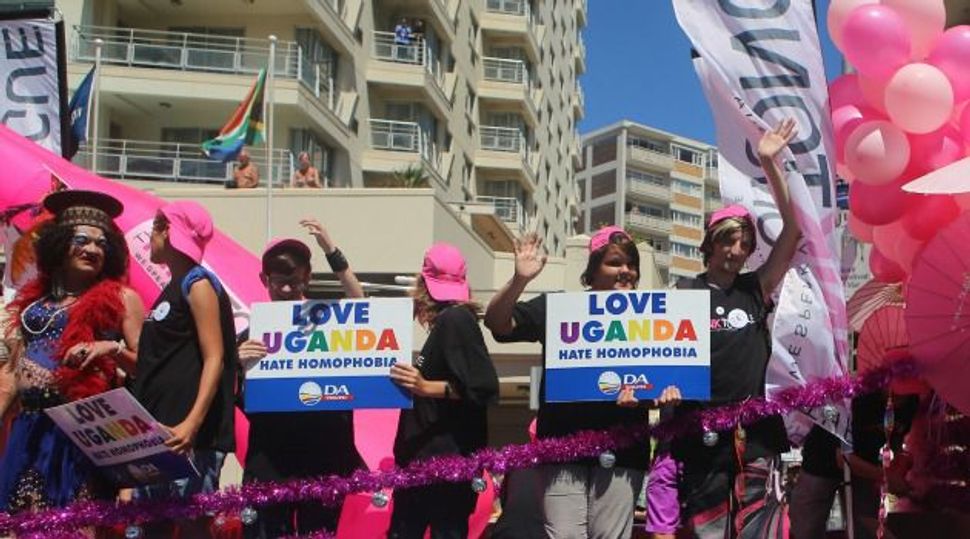 Freedom is always a primary theme on Passover, but this year, after travelling in Uganda for ten days as part of the American Jewish World Service (AJWS) Global Justice Fellowship, the idea is heavy with real-world implications.

The Haggadah instructs: “In every generation, everyone must think of him or herself as having personally left Egypt.” And yet, some of the people we met in Uganda remain trapped in their own Egypt: LGBT people are ostracized, threatened and assaulted for being who they are; women and girls are beaten and raped; people living with HIV and AIDS are isolated and abandoned by their families and communities.

The idea that all human beings are of infinite value and are created in God’s image — B’tselem Elohim — is a pillar of Jewish tradition. And yet, so many of the struggles we witness every day — in the United States, in Uganda, and elsewhere around the world — require that we pursue human dignity in a global context.

As I prepared for the trip, I studied materials about Uganda with the other Global Justice Fellows in my group, drawing upon my own experiences growing up in Colombia and travelling in many parts of the world. I read about the activists and projects in Uganda that AJWS supports and brushed up on facts. But nothing could have prepared me for the courage, ingenuity and dignity I encountered once I arrived.

We met with the director of an organization called SIPD (Support Initiative for People with Atypical Sex Development) that works on behalf of Ugandans born with indeterminate sex characteristics that do not fit conventional definitions of “male” or “female.” These people are often mutilated or killed at birth by despondent parents who can’t see a future for their child.

We spoke with several organizations working to advance human rights for LGBT people in Uganda who face relentless violence and discrimination now sanctioned by the passage of Uganda’s Anti-Homosexuality Law. These meetings required additional security precautions. I left each conversation deeply moved by Ugandan activists’ commitment to freedom, but seriously worried for their safety. Many of the people we spoke to refused to change their appearance or to dress in more conventionally-gendered ways. I found this tremendously brave but also terrifying, since it made them identifiable targets for hate crimes.

As I said goodbye to one of the transgender activists we spoke to, asking her to be careful, she said, “Life is too short to spend it being someone I am not.” The unspoken words were clear: The sentence for openly daring to be herself could be death — and she was willing to take that chance.

During the course of the week, we also met the entire staff of an organization also willing to take enormous risks to preserve the freedom and dignity of others — the legal team from Human Rights Awareness and Promotion Forum (HRAPF). The group fights to provide legal justice for marginalized people, even though they themselves are shunned by their own families and communities for their work, with neighbors assuming that they too must be LGBT or HIV-positive. HRAPF is scrappy, innovative and courageous, working within the system to support people who suffer from persecution and shame.

One of the hardest moments in our trip was our meeting with LGBT refugees from neighboring countries who escaped to Uganda for what they thought would be a better life. Sorrow and pain were evident on their faces as they shared their personal stories. One person told us he was from a prominent family in his village, but his homosexuality was perceived as a threat and he was forced to flee. Another member was a children’s rights activist in her country, but after fleeing for being gay, she was severely tortured in a Ugandan refugee camp, and now depends on a crutch to walk.

We heard about rapes, beatings and torture endured in refugee camps. When we asked what we could do for them, their request was so simple, and yet so enormous. “Please tell our story. Please make sure we are not forgotten.”

The despair we felt was offset by our time with other non-profit organizations, including the Center for Domestic Violence Prevention (CEDOVIP). We observed different ways they work at the grassroots level in three different neighborhoods in Kampala, awed at their creative, effective approach. Drama, music and games are all used as tools to illustrate the cost of domestic violence as well as engage the entire community — including men — as partners. CEDOVIP has been successful in reducing the rates of domestic violence in some communities by as much as 60%.

When I applied for the AJWS Global Justice Fellowship, I was attracted by the idea of advocating in support of U.S. policies to help improve the lives of people around the world, and I was deeply curious to learn more about the lives of people in Uganda. What I didn’t realize before our trip was that my fellows and I would leave Uganda with a powerful mandate on our shoulders. Almost as if we had personally “left Egypt,” carrying not just the collective story of the Jewish people but also the stories of the Ugandans we met who are fighting to be who they are as they are, created in God’s image — B’tselem Elohim.

Sonia Daccarett was born and raised in Colombia, and is a communications consultant and the former Director of Communications at Brandeis Hillel Day School. Sonia has B.A. in Journalism from the University of Massachusetts and a Master’s degree in International Affairs from Columbia University.

How Uganda Helped Me Mark Passover