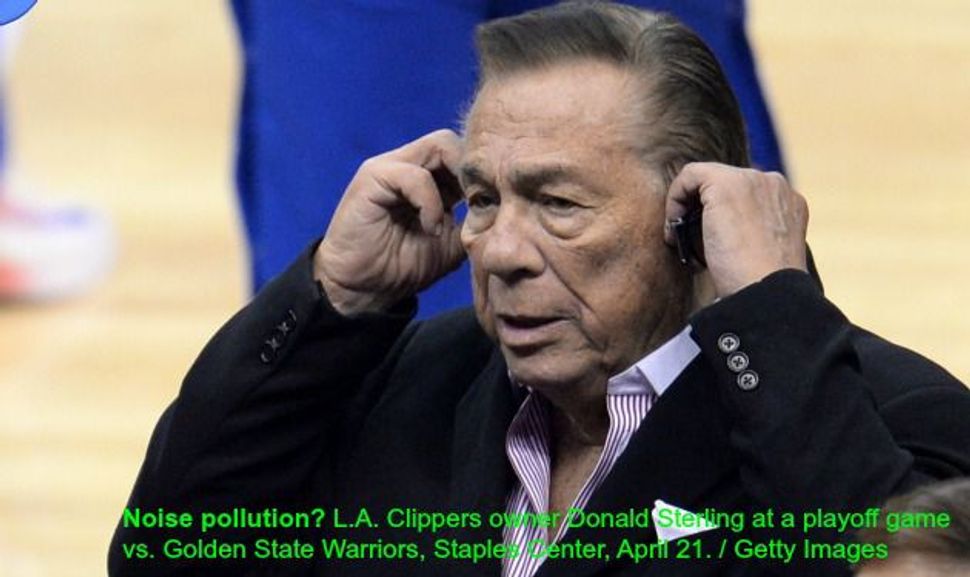 Those racist remarks attributed to Donald Sterling, the billionaire owner of the Los Angeles Clippers basketball team, reveal something very important about the state of race relations in America today. Everybody seems to agree about that. Just what they reveal, though, is anybody’s guess.

On one hand you have the anxious observation of the executive director of the American Jewish Committee, David Harris, that “60 years after the landmark Supreme Court decision in Brown vs. Board of Education, and 50 years after the enactment of the Civil Rights Act, there is still work to be done.” Hard to argue with that one.

On the other hand, the publisher of the Los Angeles Jewish Journal, David Suissa, sees a silver lining in the “immediate, widespread condemnation” from across the country and across the political spectrum, “including even a reprimand from President Obama.” (Who woulda guessed he’d come out against racism?) This makes Suissa “realize how far we’ve come. It’s not simply that bigotry of any kind has become so frowned upon. It’s also the new media environment we live in.” Privacy is dead. Anything you say, even in a telephone lovers’ spat, can and will be held against you.

So which is it? Is the glass half-empty, as Harris says, or half-full, as per Suissa?

Actually, they both miss the point. While the nation argues over how to measure the metaphorical liquid in the glass, we’ve got water coming through the roof and flooding the basement. We get all stirred up over obnoxious comments by a billionaire philanderer — as we did a week earlier over even cruder comments by Nevada rancher Cliven Bundy — but we sleep through the latest action by the Supreme Court to halt racial healing and protect our society’s structural racism.

On Saturday, April 20, Bundy held the press conference where he delivered his now-infamous musings about blacks perhaps being better off enslaved. The New York Times reported them on Tuesday, April 23. On Friday, April 26, TMZ.com released the audio of Donald Sterling apparently telling a girlfriend not to be publicly “associating with black people.”

In the middle came the April 22 Supreme Court ruling upholding a Michigan law, passed in a 2006 statewide referendum, that bans all racial considerations in admission to state universities.

The ruling, as Jon Stewart cuttingly pointed out last night, forms a perfect bookend to the court’s June 2013 decision to gut the 1965 Voting Rights Act. Both rulings deal body blows, each in its own way, to our erstwhile national effort to achieve equality between the races. The two rulings reflect the view of Chief Justice Roberts, as he wrote in the Voting Rights decision last year, that “our country has changed.” We’ve gotten over racism.

As MSNBC reporter Adam Serwer documented at the time of the Voting Rights Act ruling, Roberts has quietly made the piece-by-piece dismantling the legal structure of America’s civil rights law a centerpiece of his tenure. The one-two punch of last June’s Voting Rights Act ruling and last week’s affirmative action ruling effectively strips away the façade of constitutional nicety behind it.

In the Voting Rights case, Shelby County v. Holder, the court decided (5 to 4) that even though Congress had voted overwhelmingly to renew the requirement of federal oversight over certain states’ election laws, given those states’ history of discrimination, the democratic process had to bow to the wisdom of the court. In the affirmative action case, Schuette v. Coalition to Defend Affirmative Action, the court ruled that whatever the rights or wrongs of racial justice, the justices had to bow to the democratic process. Just so.

For going on 40 years the court has been chipping away, piece by piece, at the measures this nation adopted during its brief period of lucidity in the 1950s and 1960s to combat the ugly legacy of racism. The Rehnquist court used a scalpel and a chisel. The Roberts court has replaced them with a jackhammer and backhoe. The message they’ve been sending the nation is loud and clear: The civil rights era is over. You bigots can come back out in the open. The coast is clear.

It shouldn’t surprise us that individuals like Donald Sterling and Cliven Bundy think it’s okay to trash-talk their neighbors. They’re just following the Supreme Court’s lead.