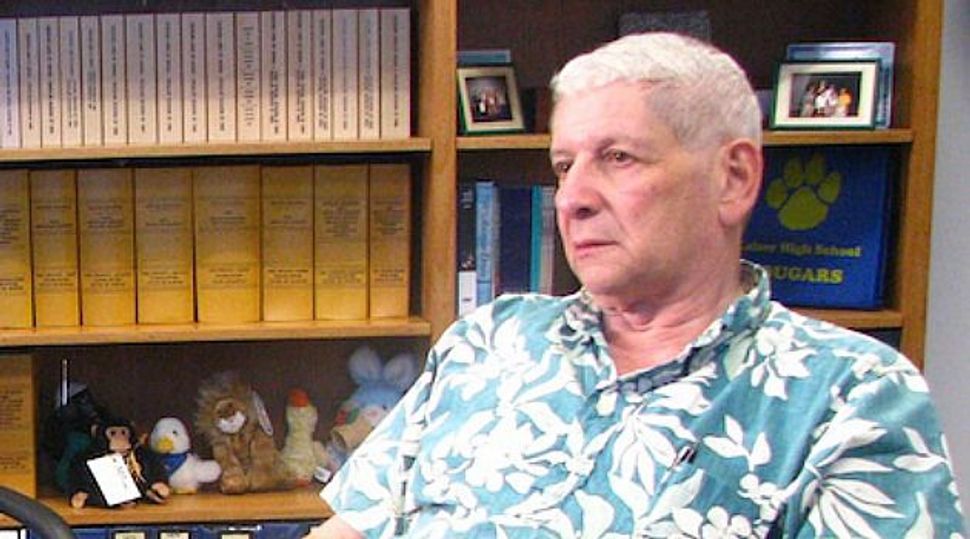 Image by courtesy of sam slom

(JTA) — Jewish voters have long tended to skew Democratic. Which is why it’s a little surprising to note that in Hawaii’s State Senate, the Republican caucus is entirely Jewish.

In fact, there’s a lot more unanimity than that, as the LA Times noted in its highly entertaining profile of the legislative body’s minority leader, Sam Slom (pronounced to rhyme with “home”), who also happens to be its lone GOP member:

The room was filled with a dozen staffers as well as the minority leader, the GOP floor leader and the top-ranking Republican on each of 16 committees, yet in 2 ½ hours there wasn’t a whisper of dissent as Slom firmly made up his mind.

That’s because Slom holds every one of those leadership positions.

Slom’s dominance of the caucus is not the result of a reign of terror — he’s just the only Republican in the overwhelmingly Democratic state’s 25-member Senate.

(Interesting side note: When Hawaii and Alaska were admitted as states in 1959, Alaska was expected to vote Democratic, while Hawaii was thought to be solidly Republican. Times have changed.)

Jews, in fact, play a surprisingly prominent role in Hawaii politics, despite constituting less than 1% of the state’s population. One of Hawaii’s U.S. senators, Democrat Brian Schatz, is Jewish, as is a former Republican governor, Linda Lingle (who lost in her own bid for the U.S. Senate in 2012), along with three of the past five state attorney generals.

Slom leads a lonely and hectic political existence as the entirety of the Senate minority — he serves on every single one of the Senate’s committees (generally one of 5 to 7 members), and when committees meet simultaneously, Slom’s staff keeps him updated as he rushes from one meeting to another.

Slom’s colleagues sound respectful and affectionate toward him. Slom says he does get the occasional angry, drunken or even anti-Semitic phone call, but this is in large part because he publicizes his cell phone number on his Senate website.

In all, he seems to be a happy, if beleaguered, warrior. He proudly claims to hold “every indoor and outdoor NCAA record for voting no,” and when his sole Republican Senate colleague retired in 2010 and was replaced by a Democrat, Slom embraced the nickname of “The Lone Ranger,” giving a floor speech in a black cowboy hat and holding a wooden pony.