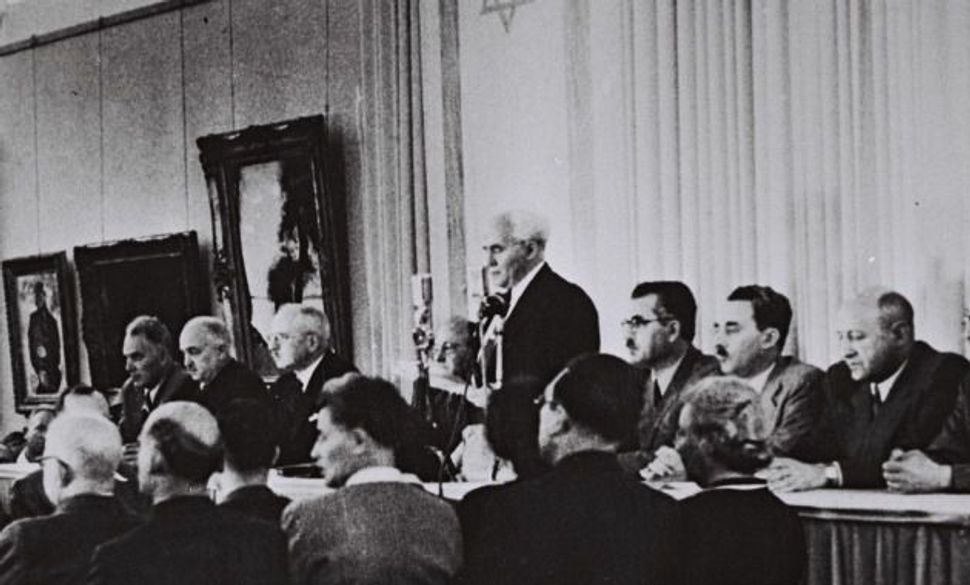 Here’s the live broadcast, as it happened. You can watch the accompanying images or follow along in English — the official translation is below.

Footnote: The British were to leave Eretz Israel/Palestine on Saturday, May 15. The Jewish Agency decided to declare independence at 4 p.m. Friday afternoon, before the Sabbath. A declaration was written, parchment was prepared, but there was no agreement on what to call the new state — Israel, Judea, Zion — until moments before deadline. That left no time for the calligrapher to inscribe the scroll. Accordingly, BG read from a typescript and the Assembly signed a blank parchment with the text tacked on, later filled in by a calligrapher.

Noteworthy, too, that while the English translation speaks of “Placing our trust in the Almighty,” the Hebrew original says “With trust in the Rock of Israel (צור ישראל — Tzur Yisrael).” This language was agreed to after some debate, as a term that allowed both religious and secular / believers and atheists to interpret it as they wished. I don’t know how the English mistranslation happened.

ERETZ-ISRAEL [(Hebrew) – The Land of Israel] was the birthplace of the Jewish people. Here their spiritual, religious and political identity was shaped. Here they first attained to statehood, created cultural values of national and universal significance and gave to the world the eternal Book of Books.

After being forcibly exiled from their land, the people remained faithful to it throughout their Dispersion and never ceased to pray and hope for their return to it and for the restoration in it of their political freedom.

Impelled by this historic and traditional attachment, Jews strove in every successive generation to re-establish themselves in their ancient homeland. In recent decades they returned in their masses. Pioneers, ma’pilim [(Hebrew) – immigrants coming to Eretz-Israel in defiance of restrictive legislation] and defenders, they made deserts bloom, revived the Hebrew language, built villages and towns, and created a thriving community controlling its own economy and culture, loving peace but knowing how to defend itself, bringing the blessings of progress to all the country’s inhabitants, and aspiring towards independent nationhood.

In the year 5657 (1897), at the summons of the spiritual father of the Jewish State, Theodore Herzl, the First Zionist Congress convened and proclaimed the right of the Jewish people to national rebirth in its own country.

This right was recognized in the Balfour Declaration of the 2nd November, 1917, and re-affirmed in the Mandate of the League of Nations which, in particular, gave international sanction to the historic connection between the Jewish people and Eretz-Israel and to the right of the Jewish people to rebuild its National Home.

The catastrophe which recently befell the Jewish people – the massacre of millions of Jews in Europe – was another clear demonstration of the urgency of solving the problem of its homelessness by re-establishing in Eretz-Israel the Jewish State, which would open the gates of the homeland wide to every Jew and confer upon the Jewish people the status of a fully privileged member of the comity of nations.

Survivors of the Nazi holocaust in Europe, as well as Jews from other parts of the world, continued to migrate to Eretz-Israel, undaunted by difficulties, restrictions and dangers, and never ceased to assert their right to a life of dignity, freedom and honest toil in their national homeland.

In the Second World War, the Jewish community of this country contributed its full share to the struggle of the freedom- and peace-loving nations against the forces of Nazi wickedness and, by the blood of its soldiers and its war effort, gained the right to be reckoned among the peoples who founded the United Nations.

On the 29th November, 1947, the United Nations General Assembly passed a resolution calling for the establishment of a Jewish State in Eretz-Israel; the General Assembly required the inhabitants of Eretz-Israel to take such steps as were necessary on their part for the implementation of that resolution. This recognition by the United Nations of the right of the Jewish people to establish their State is irrevocable.

This right is the natural right of the Jewish people to be masters of their own fate, like all other nations, in their own sovereign State.

ACCORDINGLY WE, MEMBERS OF THE PEOPLE’S COUNCIL, REPRESENTATIVES OF THE JEWISH COMMUNITY OF ERETZ-ISRAEL AND OF THE ZIONIST MOVEMENT, ARE HERE ASSEMBLED ON THE DAY OF THE TERMINATION OF THE BRITISH MANDATE OVER ERETZ-ISRAEL AND, BY VIRTUE OF OUR NATURAL AND HISTORIC RIGHT AND ON THE STRENGTH OF THE RESOLUTION OF THE UNITED NATIONS GENERAL ASSEMBLY, HEREBY DECLARE THE ESTABLISHMENT OF A JEWISH STATE IN ERETZ-ISRAEL, TO BE KNOWN AS THE STATE OF ISRAEL.

WE DECLARE that, with effect from the moment of the termination of the Mandate being tonight, the eve of Sabbath, the 6th Iyar, 5708 (15th May, 1948), until the establishment of the elected, regular authorities of the State in accordance with the Constitution which shall be adopted by the Elected Constituent Assembly not later than the 1st October 1948, the People’s Council shall act as a Provisional Council of State, and its executive organ, the People’s Administration, shall be the Provisional Government of the Jewish State, to be called “Israel”.

THE STATE OF ISRAEL will be open for Jewish immigration and for the Ingathering of the Exiles; it will foster the development of the country for the benefit of all its inhabitants; it will be based on freedom, justice and peace as envisaged by the prophets of Israel; it will ensure complete equality of social and political rights to all its inhabitants irrespective of religion, race or sex; it will guarantee freedom of religion, conscience, language, education and culture; it will safeguard the Holy Places of all religions; and it will be faithful to the principles of the Charter of the United Nations.

THE STATE OF ISRAEL is prepared to cooperate with the agencies and representatives of the United Nations in implementing the resolution of the General Assembly of the 29th November, 1947, and will take steps to bring about the economic union of the whole of Eretz-Israel.

WE APPEAL to the United Nations to assist the Jewish people in the building-up of its State and to receive the State of Israel into the comity of nations.

WE APPEAL – in the very midst of the onslaught launched against us now for months – to the Arab inhabitants of the State of Israel to preserve peace and participate in the upbuilding of the State on the basis of full and equal citizenship and due representation in all its provisional and permanent institutions.

WE EXTEND our hand to all neighboring states and their peoples in an offer of peace and good neighborliness, and appeal to them to establish bonds of cooperation and mutual help with the sovereign Jewish people settled in its own land. The State of Israel is prepared to do its share in a common effort for the advancement of the entire Middle East.

WE APPEAL to the Jewish people throughout the Diaspora to rally round the Jews of Eretz-Israel in the tasks of immigration and upbuilding and to stand by them in the great struggle for the realization of the age-old dream – the redemption of Israel.

PLACING OUR TRUST IN THE ALMIGHTY, WE AFFIX OUR SIGNATURES TO THIS PROCLAMATION AT THIS SESSION OF THE PROVISIONAL COUNCIL OF STATE, ON THE SOIL OF THE HOMELAND, IN THE CITY OF TEL-AVIV, ON THIS SABBATH EVE, THE 5TH DAY OF IYAR, 5708 (14TH MAY, 1948).