On Independence Day, the Difficulties of Loving Israel and Each Other 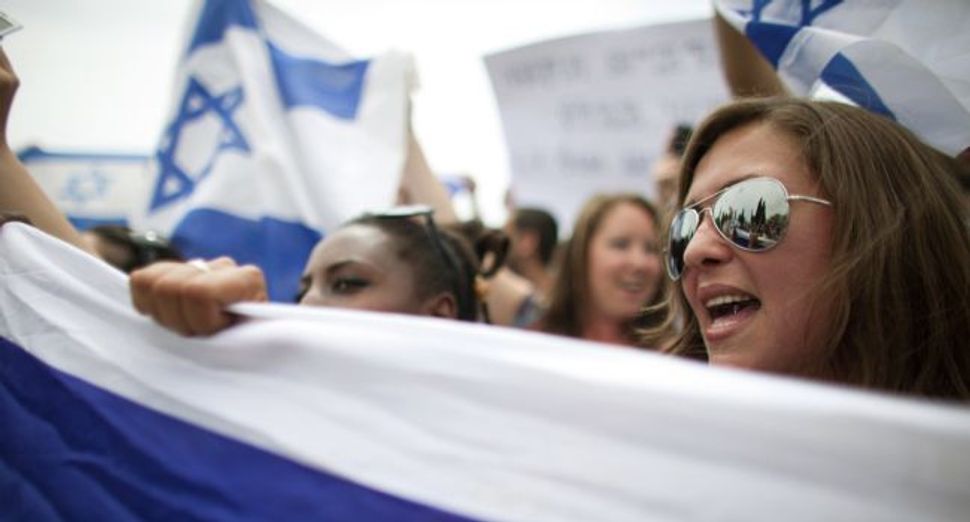 Pride: Love of Israel is no longer such an uncomplicated affair. Image by Getty Images

Every year around this time, when Israel’s independence day rolls around, we’re confronted — a good many of us — with an uncomfortable sense that loving and celebrating the Jewish state has gotten just a bit harder than last year.

Not that there isn’t a lot about Israel to love and celebrate: sunrise atop Masada, Friday evening at the Western Wall, the sensual bustle of Tel Aviv. Drip irrigation. The capture of Eichmann. The kibbutz. The rescue of Ethiopian and Russian Jews.

Most of all, we can love and celebrate the Jewish state simply because it’s there. Not so long ago, it wasn’t. It’s not too hard to imagine what that absence was like, even if you weren’t around to experience it first-hand: the precarious feeling of belonging to a homeless people, the horror of watching night descend on your cousins in Europe, and then, suddenly, the miraculous birth of a new era of Jewish independence. Having a place on the map with your name on it.

We’re still living, historically speaking, at the dawn of that new era. It’s been just 66 years since Israel gained sovereignty. We’re still not quite used to it. There are still a few kinks to be worked out. It would be astonishing if there weren’t.

Granted, some of the flaws are more than just growing pains. There have been bad decisions and grave injustices. Israel has come repeatedly to what seemed like the brink of disaster, in 1967, in 1973 and periodically during the last decade and a half of Palestinian intifada. At times it’s seemed as if the whole thing is a makeshift experiment, that the miracle was an illusion, that the world — and perhaps the Jews themselves — weren’t ready for the revival of Jewish nationhood.

There is, too, the dark truth that many of us are just coming to understand, and others of us dismiss outright: that the rebirth of the Jewish nation brought with it the undoing of another people, resulting in decades of hurt, bloodshed and hatred. For years most of us didn’t see it, or wouldn’t. In part we were blinded by the other side’s violent hostility. Partly, too, we rejected it because we feared acknowledging a darkness at the heart of Zionism would impugn its very legitimacy.

Lately it’s impossible to ignore. The Palestinian narrative has entered the culture. It’s permeated public discourse, flooded the media, blanketed the college campuses. Many of us don’t know how to reconcile it with what we’ve understood to be the Israeli miracle. Was it no miracle after all?

The plain fact is that the rebirth of Israel was a miracle. The return of the Jews to their ancient homeland, the revival of Hebrew and the creation of a modern state with a booming economy and a vibrant if imperfect democracy is one of the most remarkable events in modern history. It revived the broken spirit of a global community that had just suffered one of the worst catastrophes in human history and might otherwise have simply faded into nothingness. It happened to us, the scattered, bruised, skeptical Jewish communities of the world, in living memory.

So why does it feel as though the magic is going out of it for so many of us? Where did our love go?

The social scientists tell us it’s mostly a matter of generational drift. Those who witnessed Israel’s birth retain an indelible sense of its drama and importance. Some of that feeling persists among baby boomers who experienced the fear of disaster in the weeks before the Six-Day War in 1967 and the elation that followed.

The generations since then, however, have experienced none of that. For them Israel is simply a fact of life. In fact, some scholars say, those who grew up after 1967 have only known Israel as a military power, an occupier, a focus of controversy and, to the extent they think about it, a source of discomfort. The common emotional response is what the sociologists call “distancing.”

The biggest exception to the pattern is the traditionally religious community, including most Orthodox and small minorities of other denominations. In these circles Israel is a living, daily reality, its soil a sacred thing, its past and future central to daily prayers and the religious calendar.

Public controversy over the Palestinians and the occupation isn’t usually a source of discomfort in this community. On the other hand, the discomfort those issues arouse in other Jews is a source of alarm — and, increasingly, anger.

Thus does Israel, once a unifying force among American Jews, become a cause of division.

There’s one more exception to the distancing pattern, little noticed but critical to the mix these days: the liberal Zionist youth experience. It’s estimated that upwards of 40,000 American Jews have gone through the summer camps and after-school programs of labor Zionist youth movements, Habonim Dror and the smaller Hashomer Hatzair. About 2,000 youngsters are involved in any given year.

A recent survey of Habonim Dror alumni, the first ever, found them to be intensely attached to Israel, involved in Israel-related community activities and overwhelmingly liberal. (Full disclosure: I’m a Habonim alum.) An outsize proportion have gone on to become rabbis and communal workers. Separately, an informal survey of federation executives not long ago found that the vast majority had attended Jewish summer camps as kids, and of those, the largest single group attended Habonim camps.

The two sides aren’t evenly matched. Active Labor Zionists are far outnumbered by activist Orthodox. There’s a broad middle that leans sort of leftish, but it’s not mobilized and isn’t likely to be.

On the other hand, the left has gotten some reinforcements in recent years from Birthright alumni. Survey evidence suggests they come home strongly fired up by Israel — so much so that there appears to be a “Birthright bump,” lifting the Israel engagement of an entire generation of under-35s above that of their elders — but skeptical of Israeli government policy. My impression from my own travels is that they’re providing foot soldiers on campuses where J Street chapters are often led by Zionist youth.

The debate has been heating up wildly around the country over the past few years, escalating from shouting to name-calling and efforts — mostly by the right — to have opponents excluded from community forums, parades, JCCs, Hillels and more. It’s not going to get better any time soon.

So if it feels like it’s getting harder to love Israel lately, look again. It’s not so much Israel that we’re having trouble loving, but each other.

On Independence Day, the Difficulties of Loving Israel and Each Other