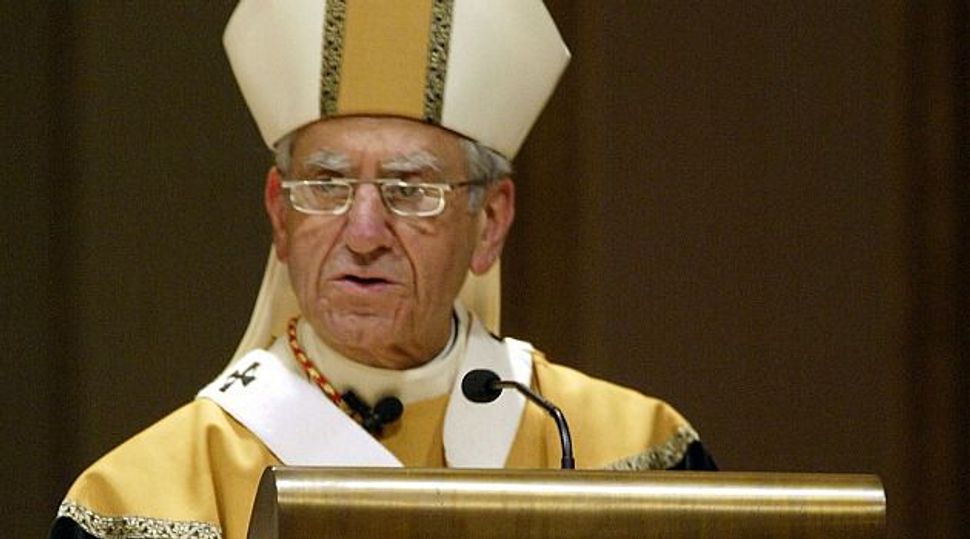 Sometime after I became editorial page editor of The Philadelphia Inquirer in 1994, I was invited to have breakfast with Cardinal Anthony Bevilacqua, the archbishop of Philadelphia. Even though my devout Catholic secretary coached me on how to address him and what I might expect, I was apprehensive – afraid that I would feel uncomfortable or, worse, commit some faux pas that would set back interfaith relations in the city for years to come.

How to have breakfast with a cardinal is not something I was taught in Hebrew school.

I need not have worried. What I remember most from that encounter was what happened when we sat down, just the two of us, at a small table in his Center City offices. A light breakfast was arrayed before us. But first, Bevilacqua bowed his head in prayer and said grace – without mentioning the words Jesus Christ.

I am certain the omission was done for my benefit.

Bevilacqua died in 2012, and his long tenure in Philadelphia was largely overshadowed by later revelations that he protected and shielded priests accused of molesting children. But I will also remember him for the way he kindly and gracefully accepted me as a Jew, as a guest in his home.

I thought of that experience as I tried to digest the arguments over the U.S. Supreme Court’s decision in Greece v. Galloway, in which a divided court ruled that town meetings may start their public sessions with sectarian prayers. Justice Elena Kagan’s powerful dissent did not say that prayer has no place at such meetings (a point I’ll return to in a moment).

Instead, she argued for prayer that is pluralistic and inclusive, in which the prayer-giver is calling upon broader human values in a shared vernacular. In other words, a Cardinal Bevilacqua kind of prayer.

Kagan’s critics counter that such prayer would be so watered down, so politically correct as to be meaningless. That’s nonsense. State legislatures open with a prayer, Congress opens with a prayer, the presidential inauguration opens with a prayer – and there’s an expectation that the words and sentiment be broad and inclusive.

Justice Stephen Breyer, in his accompanying dissent, even lists the guidelines offered by the U.S. House of Representatives to guest chaplains, who should “keep in mind that the House… is comprised of Members of many different faith traditions.” The prayer should not include personal political views, partisan politics or “sectarian controversies.”

Somehow, the House of Representatives, hardly a collegial body, has managed to do for years what the little town of Greece, N.Y. was unable or unwilling to do: Recognize that we are a pluralistic nation. For years, the only prayers before Greece’s town meetings were offered by Christian clergy using unabashedly Christian language; after a few, half-hearted tries at including Jews and Wiccans prompted by public pressure, Greece returned to its homogeneous ways.

Still the Supreme Court majority thought that was just fine. And majority they are – all men, all Catholics, all no doubt quite comfortable with the words and sentiments of these benedictions, unwilling to recognize the growing number of Americans who may not be.

There is a reasonable challenge to Kagan’s plea for inclusive prayer. Who decides what’s acceptable? Who validates? Who censors? But those same questions are occasioned by the majority view, as well. Justice Anthony Kennedy, writing for that majority, acknowledged that some prayers may be unacceptable if offered consistently, including ones that “denigrate nonbelievers or religious minorities, threaten damnation or preach conversion.”

He set the bar much higher than did Kagan, but it’s still a bar. The government is still in the position of deciding what is acceptable religious speech.

It was in trying to parse these differences that left me wondering whether Americans may be better off with no prayer at all before public meetings. Or at least no spoken prayer. What if instead we took a moment or two of silence to invoke the seriousness of purpose demanded of democracy in action? If divine intervention or inspiration is sought, surely quiet prayers are just as efficacious as loud ones.

But that case is closed. Even Kagan did not seek to overturn the 1983 decision that allowed the Nebraska legislature to open with a prayer, a decision that Kennedy used as the justification for his conclusion in Greece. It seems none of the justices are inclined to brush up against that hot wire.

So at least Kagan’s compromise should have ruled the day. Or rather, the Bevilacqua compromise. And to think that I was a guest in his home. The citizens of Greece who were forced to listen to only one kind of prayer were not at those town meetings as guests. But I suppose now they will feel that way – guests, wanted or not.