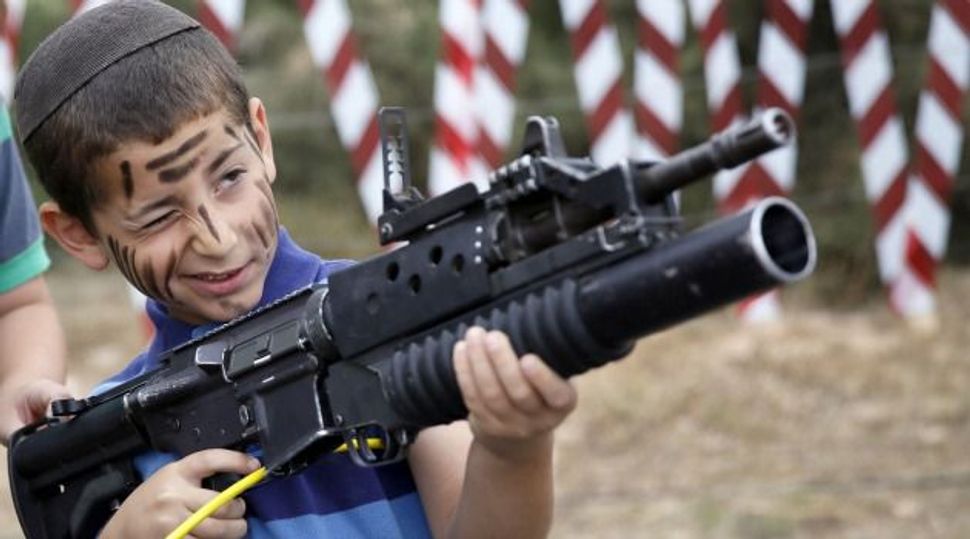 A boy plays with a rifle during a weapons display in Efrat, Independence Day 2014 / Getty Images

These are some of the disturbing photos that flooded out of the West Bank earlier this week on Israel’s Independence Day, or what Palestinians call the Nakba (Catastrophe).

I can imagine that despair and hopelessness probably rattled the Jewish community. How could there ever be peace when kids are trained to aspire toward violence and militancy?

At my old Jewish day school, there was probably a lot of chatter about how this was further proof that only military force could work to quell violence. The Middle East Media Research Institute (MEMRI) was probably all over the story. Palestinian Media Watch, too.

But instead, when I turned on my computer this morning, I couldn’t find a thing on any of the sites that track hate in the Middle East. None of my newsy friends even dedicated a Facebook status. No one seemed to really care. And for one reason: the people in question weren’t Palestinians, but right-wing Jewish settlers.

Gideon Levy, a Haaretz columnist, noted the striking similarities between these photos and the Palestinian glorification of violence. “Where else do they force a little child to crawl with a backpack on his back? When Hamas treats its children like this, Israeli parents tut-tut with disgust: Look at these beasts.”

It’s a double standard all too common to the conflict.

We’re told that Palestinian maps in schools often show a unified Palestine between the river and the sea — “how awful!” — yet Israeli maps, more often than Palestinian ones in fact, don’t show the Green Line, and Jews don’t really seem to care.

We’re told that Palestinians are taught in school that the Jewish historical claims to the land, particularly the Temple Mount, don’t really exist — “how awful!” — yet in a similar tone, many Israeli children learn that “Palestinians” were only recently invented, and Jews don’t really seem to care.

We’re told that Palestinian textbooks distort history — “how awful!” — yet a recent State Department study found that many Israeli textbooks do too, and Jews don’t really seem to care.

And now, we have yet another confirmation that Israeli children also learn to glorify and aspire toward violence, and — surprise, surprise — no one really seems to care.