Even Lefties Should Support David the Nahlawi 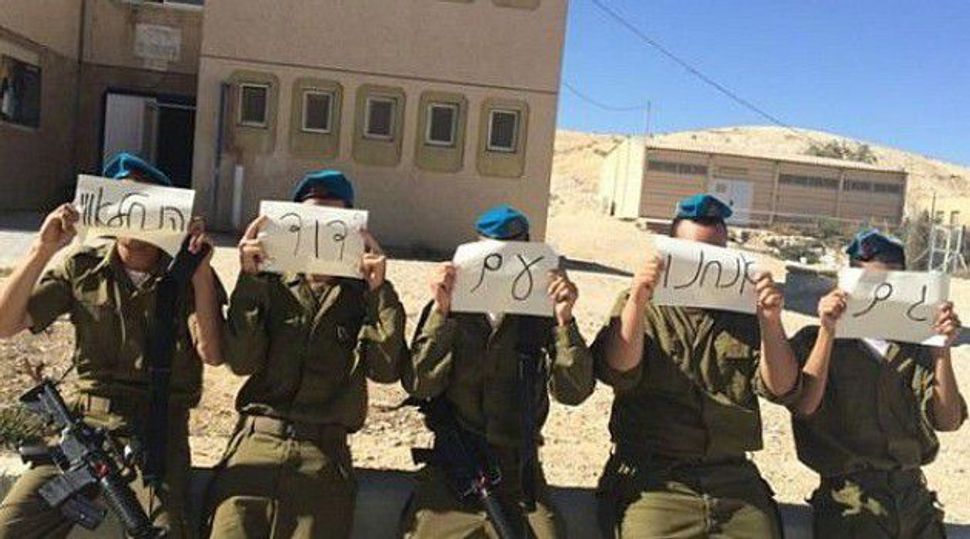 Israeli soldiers support a comrade punished for pointing a gun at a Palestinian teenager. / Facebook

We should all be with David the Nahlawi.

Yes, I am talking about the 19-year-old Israeli soldier who pointed a gun and cursed at Palestinian youths in Hebron. Yes, I know that the brass knuckles one of his antagonists was supposedly holding turn out to have been Muslim prayer beads. And yes, David (“Nahlawi” refers to his army brigade, Nahal—his real name’s “Adamov”) has attracted some unsavory friends. The Facebook group supporting him, which has more than 130,000 likes, posts militaristic photos in which soldiers, shackled by the army’s code of engagement, are hapless victims of Palestinian violence. And while, horrible to say, that sometimes happens, the reality is soldiers in Hebron are occupiers. They are there to protect a small cluster of ideologically hardened settlers, even when that involves, say, indefinitely closing the main Palestinian thoroughfare.

But pillorying a teenage soldier only deflects outrage from the real villains. Don’t get mad at David the Nahlawi. Get mad at the cynical old men, army commanders and politicians, who send 19-year-olds into the West Bank with machine guns and ethics rulebooks to control a hostile population. Then, when the guns are pointed at kids and the rulebooks discarded, all of a sudden, they’re shocked, shocked. Adamov’s actions, a military spokesman said, “did not seem to fall in line with what we expect from our soldiers, as far as conduct is concerned.” Sure.

Violence against Palestinians isn’t an aberration caused by one angry young man. It’s the predictable, expected result of a long-term military occupation. For every one incident that makes the news, hundreds don’t.

Breaking the Silence, an Israeli organization of former soldiers, published a 93-page book of soldiers testifying about serving in Hebron between 2008 and 2010. On page eight, we hear about the “front command, the company commander” who “were always talking about how they would beat up Palestinians for fun, the whole time.”

Nor is it just talk. Go read the gory details there, or read about how soldiers regularly break up non-violent demonstrations, seal off un-permitted Palestinian houses, and detain kids as young as sixth graders. These aren’t rotten eggs, bugs in an otherwise smooth occupation; forcibly controlling an enemy population is the point.

In that context, painstaking, ethical rules of engagement are a bad joke. That’s the moral I draw from Shani Boianjiu’s 2012 short story about serving in the territories. She explains in an interview:

When I was in the army, one of the things I did was train groups of soldiers to use different means of suppressing demonstrations. The kinds of methods they were to use depended on their distance from the demonstrators: if they were too close to them, some of the weapons at their disposal could hurt or kill people. One time I taught a group of reservists… they mocked the instructions… They thought that the expectation that, in the heat of a confrontation, they could measure their precise distance from the demonstrators to make sure that the tools they were using would prove effective rather than fatal was ludicrous. One reservist asked me if I could imagine a scenario in which soldiers would have time to measure all these distances while at the same time trying to control a wild demonstration. I couldn’t…

Look again at the video. Do you see David standing helpless, nervously swinging his gun arm from side to side, backing away waiting for help? That’s the look of someone placed in a ludicrous situation. That’s the look of a 19-year-old told that not only does he have to keep Hebron safe for settlers and crush Palestinian resistance, he also has to uphold the standards of the most moral army on earth.

The occupation is a political choice — I think a terrible, immoral one, but you don’t have to agree. The real scandal is the idea of the moral, the pure occupation. The scandal is when an IDF spokesman claims there’s “no link” between soldiers’ elevated rates of “suicide and the fact that the soldiers were serving in the army.” The scandal is that Israeli soldiers have been court-martialed for violence in breaking up demonstrations since 1982, and we’re still acting like this is about individual soldiers. The real scandal is that, like it or not, so long as we keep Hebron until tight military control, David the Nahlawi will be with us.

Even Lefties Should Support David the Nahlawi