The Roberts Court: No Longer Just an Umpire 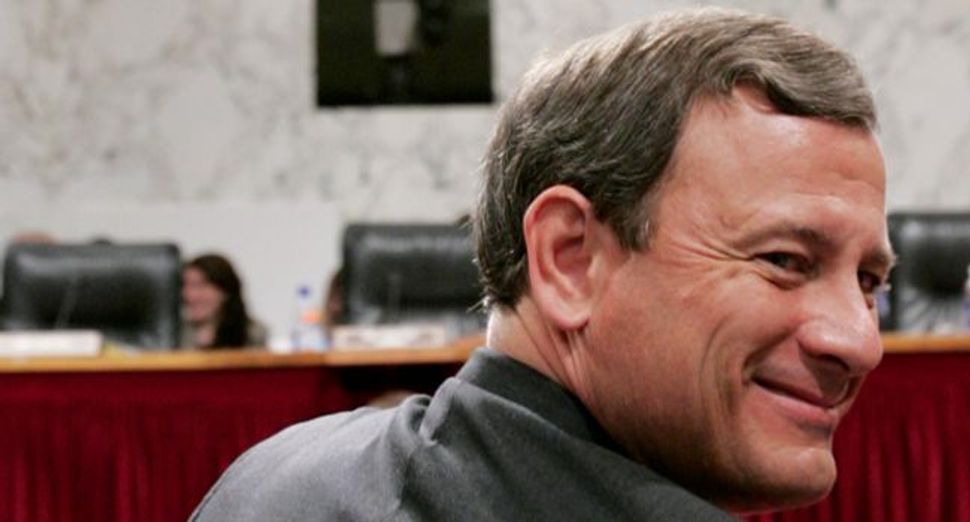 Not as Advertised: John Roberts has turned out to lead a very different type of court than promised. Image by Getty Images

By now you’ve probably heard about the controversial May 5 decision by the U.S. Supreme Court, letting an upstate New York town open its monthly board meetings with an explicitly Christian prayer. You probably haven’t heard its most alarming implications, though. Buckle up.

The case involves the Town of Greece, a stolidly middle-class suburb of Rochester. Back in 1999, Greece began inviting local clergy to open the town board’s public meetings with a prayer. In 2008 two residents, Susan Galloway, who’s Jewish, and Linda Stephens, an atheist, filed a lawsuit. All the invited preachers had been Christian. Having to sit through paeans to Jesus’ resurrection before participating in town meetings, the women complained, “puts coercive pressure on citizens to participate in the prayers.” The Supreme Court said it doesn’t. It’s just “ceremonial,” whatever that means.

This being the Supreme Court, the decision frees local governments nationwide to follow Greece’s lead and ask citizens to bow their heads in acknowledgement of, for example, “the saving sacrifice of Jesus Christ on the cross,” before bringing their business before their elected council members.

That’s not most alarming aspect, though. We’re talking about a historic turning point in American jurisprudence. For the last 67 years, going back to Everson v. Board of Education in 1947, this nation was progressing more or less steadily toward creating a neutral public square where all citizens are treated equally, whatever their religion. For decades the Supreme Court insisted, as it ruled in Engel v. Vitale in 1962, that even the most “indirect coercive pressure upon religious minorities” is unconstitutional. We were reaching the point where religious dissenters needn’t feel like guests in their own home.

Now we’re apparently reversing course. The court’s 5-4 Town of Greece ruling, neatly dividing the Republican and Democratic appointees, says that, hey, a little shout-out to Jesus can’t hurt anyone — as long as its “purpose and effect” aren’t “to exclude or coerce nonbelievers.” And if anyone is accidentally offended — well, tough luck. “Offense,” Justice Anthony Kennedy wrote, “…does not equate to coercion.” The government is free to make you squirm as long as it doesn’t point a gun at your head.

But that’s not the most alarming part, either. In rolling back a half-century of court precedent on church-state separation, the justices continued a practice that’s come to characterize the court under Chief Justice John Roberts: disregarding precedents the conservative majority doesn’t like.

Overturning precedent is supposed to be rare in our legal system, reserved for grave lapses like Dred Scott or Plessy v. Ferguson. As Roberts himself intoned at his Senate confirmation hearings in 2005, “Judges have to have the humility to recognize that they operate within a system of precedent, shaped by other judges.”

Since taking over, though, he’s led a veritable campaign of overturning, nullifying and eviscerating precedent that’s — well, unprecedented. In rulings on political spending, abortion, gun control, voting rights, school integration and more, the court has reversed decades of law and policy at a pace that’s left observers gasping. As liberal Justice Stephen Breyer acidly noted in 2007, “it is not often that so few have so quickly changed so much.”

What’s particularly striking about the court’s actions is their divisiveness. In olden days, if the Supreme Court decided to take the country around a sharp turn, it generally took care to build consensus. Many of the most dramatic decisions of the past century — Brown v. Board of Education, Gideon v. Wainwright on defendants’ right to counsel, Loving v. Virginia on interracial marriage — were unanimous. Even Roe v. Wade was 7-2.

Not the Roberts court. Its most controversial rulings have nearly all been 5-4.

Equally striking is the court’s disingenuousness, often verging on stealth, when gutting precedent. Occasionally, as in Citizens United, the 2010 corporate political spending decision, the justices openly admit they’re overturning a past ruling. Mostly, though, they find tortured, technical reasons why the earlier case was different. That’s allowed them to eviscerate a ruling without openly overturning it. They’ve done it with voting rights, partial-birth abortion, free speech for high school students, citizens’ access to the courts and much more. Town of Greece was the same.

Precedent plays a slippery role in Town of Greece. The ruling relies heavily on a 1983 decision, Marsh v. Chambers, that upheld a daily prayer in the Nebraska state legislature. Even though it was obviously a government-sponsored religious ritual, the court had decided such prayer was an old American tradition and essentially harmless. But the Nebraska prayers, unlike Greece’s, were kept carefully ecumenical and nondenominational to avoid excluding anyone. The court claimed Town of Greece simply followed Marsh, except now it decided government shouldn’t edit the prayers’ overtly Christian content. That would be mixing state and religion.

The confused Marsh-Greece interplay opened an odd rift among Jewish advocacy groups. The American Jewish Committee and Jewish Council on Public Affairs argued in an amicus brief on Greece, drafted mainly by renowned AJC attorney Marc D. Stern, that prayers in legislatures are fine but should be nonsectarian, like Nebraska’s. The Anti-Defamation League disagreed. Instead it joined several liberal groups, including ACLU, arguing that Marsh itself is unconstitutional and should be overturned. ADL has viewed Marsh the same way ever since 1983, when it cosigned a brief drafted by respected American Jewish Congress lawyer (wait for it…) Marc D. Stern. Life is funny.

But the precedent issue isn’t the scariest part, either. The Roberts court’s cavalier treatment of precedent is just one part of a larger pattern that one 2013 study called “judicial overreach.” In case after case, said the study, prepared by Alliance for Justice, a broad coalition of liberal groups, the court’s conservatives have “overstepped the bounds of accepted high-court practice” in order to reach their preferred result.

In addition to disregarding precedent, the study said, the court routinely accepts cases that don’t deserve or warrant Supreme Court review; answers questions that haven’t been put before it; and rules on issues that aren’t legal but factual and therefore should be left to lawmakers or trial courts — like whether Alabama still practices voter suppression. The consistent goal, the study said, is to use cases to create the desired law, rather than letting law decide cases.

The funny thing is, the conservative justices like to accuse the liberals of “judicial activism” while wrapping themselves in the mantle of restraint. Roberts famously claimed at his confirmation hearings that a judge’s job is like an umpire’s, “not to pitch or bat” but simply “to call balls and strikes.” After nine seasons, his stats shows a player who likes to round the bases more often than he admits. And he’s got a lifetime to do it. That’s the scary part.

The Roberts Court: No Longer Just an Umpire