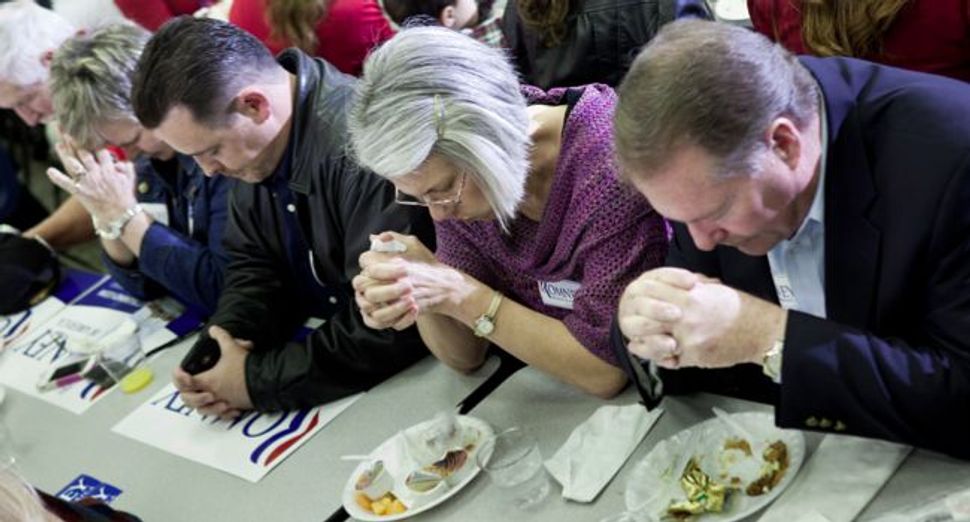 Prayer: What is appropriate when it comes to faith in the public square? Image by Getty Images

The recent Supreme Court decision in Town of Greece v. Galloway upheld the constitutionality of the town’s prayer before its monthly board meeting. In reaching this conclusion, the majority’s opinion focused on the long-standing tradition of legislative prayers in the United States, dating back to the earliest years of our nation’s history.

By this logic, so long as the prayers do not “denigrate, proselytize, or betray an impermissible government purpose,” the continued existence of such traditional prayers, according to the majority opinion, is simply a “tolerable acknowledgement of beliefs widely held” as opposed to a “first, treacherous step towards establishment of a state church.”

But notwithstanding the Court’s attempt to delicately navigate the relationship between church and state, the opinion fails to account for the explosion of religious pluralism in the United States.

For nine years — until the town found itself on the brink of litigation — only Christian clergy were invited. But all parties agreed that this was not the result of any intentional discrimination against other religions. In fact, the overwhelming majority of citizens in the Town of Greece are Christian. And according to a majority of the Supreme Court, so long as the selection process does not denigrate, proselytize or discriminate, the prayers do not trigger any First Amendment concerns. This remains true even as twothirds of these prayers incorporated explicitly Christian language — such as references to “Christ,” “Jesus,” “the Holy Spirit,” or “Your Son.”

But the majority of the Court concluded that such a worry was exaggerated. Instead, as Justice Samuel Alito explained in his concurring opinion, such criticism of the Supreme Court’s decision “boils down to this: The town’s clerical employees did a bad job in compiling the list of potential guest chaplains.” According to Justice Alito, critics should be far more forgiving of the informal and imprecise method for handing out invitations often executed by part-time employees of the town.

Maybe. But can we really chalk up nine consecutive years of Christian clergy delivering the monthly prayer to a clerical error — a bureaucratic whoopsie-daisy? How is it that nobody in the town’s office of constituent services looked at the list and said something — or, better yet, someone — is missing?

While the overwhelming majority of the town of Greece may be Christian, it isn’t exclusively Christian. In Monroe County — the county that includes the Town of Greece — 3 percent of the population is Jewish. There is a Buddhist Temple in the town and a number of synagogues just outside the town borders in the city of Rochester, N.Y. Could this all really be explained by a clerk doing a “bad job”?

Truth be told, the answer is somewhere between yes and no. No party to the litigation claimed that any outright discrimination motivated the town. But conscious discrimination is just part of the story. The real problem is when government employees look at a list of exclusively Christian clergy and really don’t see a problem. It is when religious minorities are invisible to government — when their absence isn’t even noted — that First Amendment concerns ought to loom largest.

The fact that the list could have been compiled without anybody noticing that there were no Jews or Muslims, Sikhs or Buddhists, points to the structural obstacles to the full-throated principles of religious pluralism that animate the First Amendment.

And here we reach the core of the problem with the Supreme Court’s decision. The United States has become one of the most religiously diverse countries in the world. Public prayer can bolster this religious diversity by affirming the value of religious pluralism, but only if it incorporates a broad spectrum of faith traditions. If we are to capitalize on this opportunity, our core constitutional commitments must reflect this religious diversity, ensuring that citizens never feel as if they have been cast out of our shared political community because of who they are or what they believe.