The Lessons of the ‘Lavon Affair’ 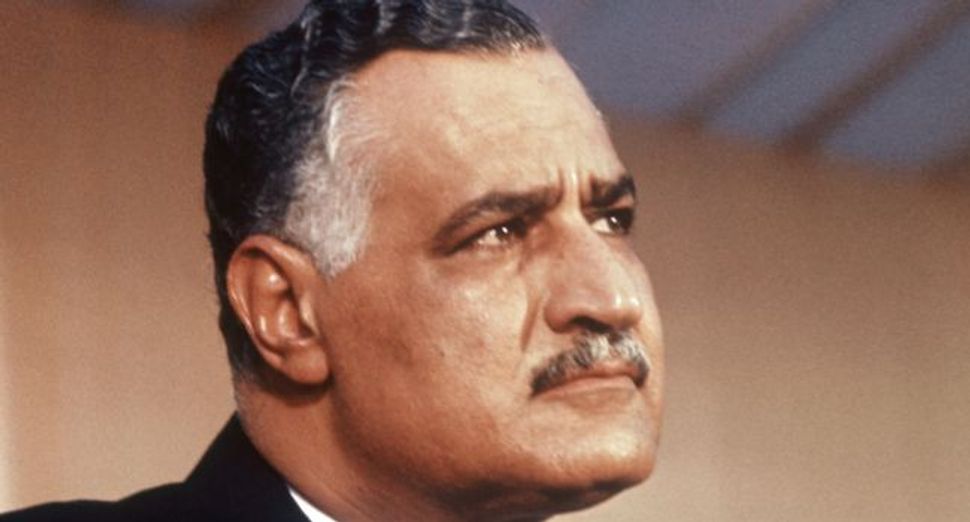 Sitting around the Shabbat table, mourning once again a peace process gone bad, I casually mentioned, “This is not the first time this has happened. Sixty years ago, almost to the day, a ‘peace process’ was torpedoed by the Lavon Affair.’”

Few remember the Lavon Affair, the cause célèbre in Israel in the 1950s. Fewer even will remember that, in the early 1950s, there was real hope for peace with Egypt.

The Affair itself, named after then-Defense Minister Pinchas Lavon, was a failed Israeli covert operation, whose failure became a scandal, indeed a nightmare, for the government. Known in Israel as Ha’esek Ha’bish — “the Bad Business” — the Lavon Affair triggered a chain of events that resulted in the collapse of one Israeli government in 1955, and of the long-term decline of the regnant Mapai Party, which had dominated the Yishuv in Mandatory Palestine, thence the State of Israel, for decades. More important, the Affair had profound consequences for power relationships in the Middle East.

The background to “Lavon” had to do with international and domestic Israeli politics both. In the early years of his regime, Egyptian Prime Minister Gamal Abdel Nasser (who had seized power from a doddering Egyptian monarchy in 1952), viewed Israel with ambivalence. Nasser had his problems at home, and he knew that he could not defeat Israel militarily. In 1953 he sanctioned secret contacts between his representatives and Israeli officials. The Egyptian demands were not earth-shattering: The Egyptians asked for some minor territorial adjustments along the Sinai-Gaza-Israeli border. They asked for compensation for — not repatriation of — Palestinian refugees. (Nasser later did waffle on the repatriation issue.) They said that they needed a land-link through the southern Negev to Jordan.

The Israelis said, in effect, “We can talk about these points — if the Arab boycott were to be lifted.” Nasser: “Let’s talk.”

Negotiations commenced in earnest following the resignation of David Ben-Gurion as prime minister in November 1953, and his replacement by the dovish Moshe Sharett, who had been the foreign minister. Sharett came to office with an idée fixe: peace with Israel’s neighbors — especially Egypt — was not only possible but necessary. Indeed, the negotiations, especially on the repatriation-of-refugees issue, were carried on in an atmosphere of seriousness. Both sides wanted the negotiations to succeed.

What happened is that Ben-Gurion did not want them. Upon resigning the prime ministership, B.G. made sure that one of his protégés, Pinchas Lavon, became defense minister. Lavon, Ben-Gurion, and Moshe Dayan were amongst the hard-liners who were opposed to Sharett’s secret talks with the Egyptians. They viewed Sharett as the worst kind of dove: soft, and one who would give the Egyptians unnecessary concessions. They were intent on torpedoing the negotiations.

At the same time there were developments on the international front. The Eisenhower administration began expressing support for Egyptian nationalism. Israel was afraid that this policy, which in effect encouraged Britain to withdraw its military forces from the Suez Canal, would embolden Nasser’s military ambitions towards Israel.

The Lavon Affair is yet shrouded in mystery, but what we do know is that in early 1954, someone in the chain of command, possibly Defense Minister Lavon — and without Prime Minister Sharett’s knowledge — ordered the head of Israeli military intelligence, Colonel Binyamin Gibli, to activate a “sleeper” cell of agents in Cairo. “Operation Susannah” was a plan to discredit Nasser’s regime, and at the same time create an atmosphere in which the British and American opponents of British withdrawal from the Canal would be able to gain the upper hand. The idea was to undermine Western confidence in Nasser’s regime with a series of terrorist bombings in Cairo and Alexandria, which would be blamed on nationalists, the Muslim Brotherhood, and Communist factions. The bombings took place in July.

The twelve members of the “Susannah” cell — nearly all Egyptian Jews — were an amateurish lot, and were arrested within days. Some historians indeed believe that whoever authorized the caper fully expected that the Israeli “signature” would be revealed, and that Susannah was specifically designed to scuttle Nasser’s peace talks with Sharett — which is precisely what happened.

Nasser understandably believed that Sharett had double-crossed him — talking peace while authorizing terror attacks in Egypt. Sharett for his part denied any knowledge of an Israeli role. We now know from his diaries that Sharett knew that Ben-Gurion, Dayan, and Lavon were responsible, and that Dayan and Lavon were lying to investigators.

In any case, peace talks were dead. In February 1955 Sharett, under pressure and reluctantly, replaced Lavon with Ben-Gurion as minster of defense. Within days Israel raided an Egyptian army post in Gaza, in which fifty-six Egyptian soldiers were killed. Late in 1955 Ben-Gurion replaced Sharett as prime minister. The long-term decline of the Mapai Party, which culminated in the election of Menachem Begin in 1977, began with the revelations of lying and double-dealing that emerged from the investigations in Israel of the Lavon Affair.

The aftermath of Lavon was disastrous for Israel. The affair destroyed any possibility of peace with Egypt. More — Nasser used Operation Susannah and the Gaza raid as the rationale for his 1955 arms deal with Czechoslovakia, which was a factor that led to the nationalizing the following year of the Suez Canal and the Sinai Campaign of October-November 1956. And analysts suggest that it was the Lavon Affair that was responsible for scuttling a proposed U.S.-Israel security pact. Further, Israel lost standing and credibility in its relations with the United Kingdom.

The demise of the peace process? Yes — we have been there before.

Jerome Chanes, a contributing editor, is the author of four books on Jewish public affairs and history. He is a fellow at the Center for Jewish Studies of the CUNY Graduate Center.

The Lessons of the ‘Lavon Affair’