Shavuot Is Holiday That Speaks of Love And Freedom 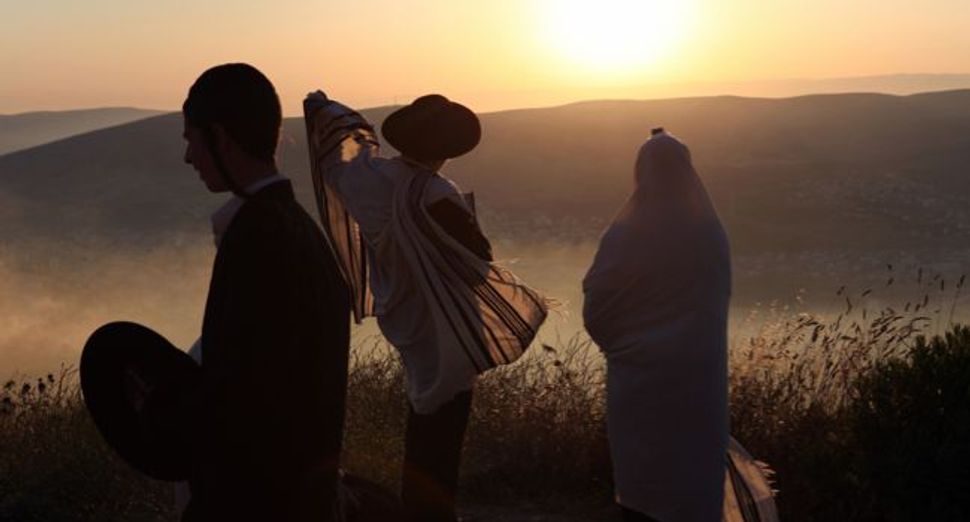 On the Mountain: Men praying on Mount Gerizim overlooking Joseph’s Tomb on the eve of Shavuot. Image by Getty Images

The contemporary notion of freedom is twisted, at least in Judaism’s eyes.

Many moderns feel fettered by — depending on the particulars of their lives — their jobs, finances, parents, children or spouses, and they imagine that cutting whatever bonds they find bothersome will make them free.

But freedom isn’t shaking oneself loose of human connections, winning the lottery and moving to Monaco to indulge. That’s just exchanging one master for another (indulgence). Do any of us really think of the wealthy and hedonistic as free? See: Winehouse, Amy; Scott, L’Wren; Hoffman, Philip Seymour.

The thought’s timely, as we approach the end of Passover. Didn’t know that Shavuot is the true end of Passover? Of course it is. Jews are instructed by the Torah to verbally count each of the 49 days (pronouncing a blessing on the act) between the second night of Passover until the “First Fruit Festival” or “Feast of Weeks,” which this year falls on June 4 and 5. What that counting implies is that the two holidays, though they may seem like discrete festivals, are in fact something of a binary.

Shavuot gets short shrift these days, perhaps because it lacks special observances. (Cheesecake and blintzes don’t count — although their calories, unfortunately, do.) Spending the entire night in study, while commendable, is a mere custom, not a requirement of the holiday. There is no Shavuot equivalent to a shofar or an etrog or a Seder.

And yet, the upcoming holiday is arguably the most important one for contemporary Jews, because it holds the secret not only of freedom, but also of love. Really.

In the Written Torah, Shavuot is associated with only agricultural matters. The Oral Torah, however, reveals that the festival commemorates the revelation at Sinai, the seminal event of Jewish peoplehood. (The 19th-century German luminary Rabbi Samson Raphael Hirsch suggested that the Written Torah purposely omits that association, leaving it to be conveyed by the Oral Torah, in order to stress the latter’s indispensability.)

Which only cements the connection between Passover’s freedom theme and Shavuot, because the Hebrew word for freedom is cheirut, evoking the word charut, “inscribed,” the word the Torah uses to describe the etching on the tablets of the law brought down from Sinai by Moses. That wordplay yields a profound talmudic teaching: “The only free person is the one immersed in Torah.”

That strikes many as a strange idea, understandably. Freedom, after all, seems more consonant with an easy chair, a glass of wine, unlimited cable and a remote in hand than with immersion in an intellectually taxing corpus of abstruse texts, subtle ideas and legal/ritual minutiae.

What our religious tradition is telling us, though, is, as King Solomon put it, “Man is born to toil.” In other words, there is no such thing as what we simple-mindedly think of as “freedom.” We’re here to work; get over it. Our only choice is meaningless servitude (to whatever strikes us at the moment as fulfilling or fun) or meaningful servitude. And the Jew’s most meaningful labor is dedication to the Divine (which shines some light on the “stay up and study all night” Shavuot custom).

Talmudic rabbis portray the revelation at Sinai as a betrothal of the Jewish people by the Creator. Some of the customs observed at Jewish weddings, in fact, have roots in the event. The chuppah canopy recalls the tradition that the mountain was lifted above the heads of the people; the candles borne by the parents of the bride and groom are reminiscent of the lightning; even the breaking of the glass, Jewish mystical sources say, echoes Moses’ breaking of the Tablets of the Law.

And so, Shavuot commemorates a cosmic declaration of love. Our ancestors (and our own souls, as well, as the Midrash famously teaches) stood united in effecting a deep bond by accepting God’s betrothal gift: His Torah. No wonder the book of Ruth, a love story — but about meaningful love, not the self-love that so often passes for the real thing today — is read on the holiday.

Love and freedom might strike some as things that are antithetical, or even antagonistic. But that’s only when freedom is defined as being unfettered, and love as self-gratifying. When one understands the true meanings of those sublime words, one realizes that they both are about the same thing: a meaningful relationship. That’s true in our individual lives and in our national one, no less.

Shavuot Is Holiday That Speaks of Love And Freedom