Flood of Reports Point to a Warming Earth — But Concern Drops 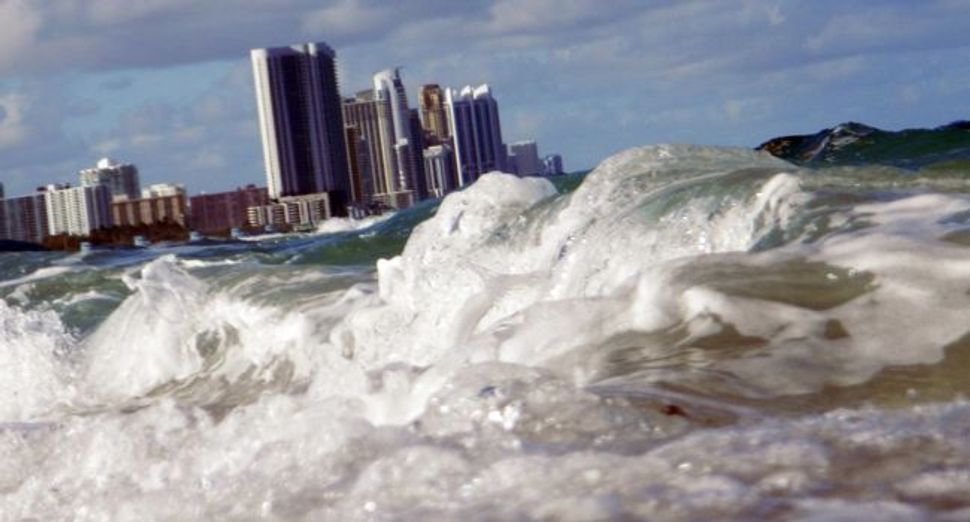 Rising Waters: Buildings are seen near the ocean as reports indicate that Miami-Dade County in the future could be one of the most susceptible places when it comes to rising water levels. Image by Getty Images

May 2014 was one of the most worrisome months in recent memory for the health of the planet’s climate. The month saw a sudden, unexpected increase in the pace of really scary new climate-change studies coming out of scientific research institutes in America and Europe.

Some of the studies document the impact of climate change, which is arriving faster and hitting harder than even pessimists predicted. Others examine likely future impact on sea level, weather, global economy and more.

Scariest of all, though, are reports on American attitudes toward climate change and the prospects for concerted action to slow it and moderate its effects. It doesn’t look good.

The most talked-about study was the 840-page National Climate Assessment, third in a series mandated by Congress in 1990. Released May 6, it reviews the ways climate change is visibly impacting conditions in the United States. “Climate change,” it says, “once considered an issue for a distant future, has moved firmly into the present.”

Most unsettling are two separate studies, published simultaneously May 12, showing that the melting of the ice sheet over western Antarctica has passed a tipping point and is no longer stoppable. Over the coming century it’s expected to raise sea levels worldwide by at least 10 feet, flooding coastal regions where half our grandchildren will live. Parts of Miami already find themselves regularly ankle-deep in seawater.

Another study, released May 15 by Standard & Poor’s, warns that vulnerable developing nations like Vietnam, Bangladesh and Nigeria will see their economies and credit ratings battered in coming decades as shifting rain patterns hurt agriculture and changing weather brings pests and disease. In East Asia alone, according to Munich Re, the world’s largest reinsurance company, the impact of climate change, by intensifying extreme weather events, has doubled the annual cost of natural disasters in just the past decade from $10 billion to an average $20 billion per year.

Yet another report, released May 12 by the OECD’s International Energy Agency, estimates that the industrialized nations have lost some $8 trillion so far by delaying global conversion to green energy on a scale sufficient to keep global warming below the catastrophic threshold of 2 degrees Celsius (3.6 degrees Fahrenheit). The agency estimated in 2012 that the upfront costs of needed conversion would total $36 trillion. Now it’s $44 trillion. In the longer run, the agency says, those upfront costs will be more than offset by an estimated $115 trillion savings as of 2050 from more efficient energy use.

Moving along, a study released May 14 by the federally-funded Center for Naval Analyses warned that climate change threatens America’s national security. The dangers include instability in the most climate-vulnerable regions, mass migration, weakened domestic infrastructure and competition for resources in the newly defrosted Arctic Ocean. Several other May studies reinforced earlier theories that global warming is helping to intensify wildfires in California, due to increased heat and dryness, and hurricanes in the North Atlantic, due to a northward expansion of the tropical zone where warm ocean surfaces bring storms to peak strength.

Another batch of new studies punches holes in some favorite myths of climate skeptics. The National Oceanographic and Atmospheric Agency reported May 20 that April 2014 had tied the record, set in 2010, for the warmest April on record. It was also the 350th consecutive month with above-average temperatures.

And it put 2014 on track to be the sixth-warmest year globally since record-keeping began in 1880. Despite skeptics’ claims that global temperatures have stopped rising, nine of the 10 warmest years on record have been in the 21st century (the exception was 1998).

Another myth-buster: a third study of Antarctic ice, released May 19. Coming a week after the two western Antarctica studies, it shows a surprising rapid loss of ice across the entire frozen continent, not just in the west. Some past reports claimed the overall mass of Antarctic ice was actually growing, since the continent’s surface elevation was known to be rising relative to sea level. The new research, based on hundreds of thousands of satellite measurements by the European Space Agency over three years, found the opposite: ice is disappearing. The reason that surface elevation is rising is not an increase in ice but the opposite: The massive ice sheet is melting and thinning, reducing its weight and allowing the ground underneath to expand upward.

The eastern Antarctica ice sheet is far larger than the western sheet and is disappearing much more slowly. The western sheet has retreated to the point that the ground underneath now touches the ocean for the first time in millennia. Those two May 12 studies reported that much of the ground beneath the western glaciers is below sea level, rimmed by a high ridge that runs along the coastline. The retreat of the glacier has allowed seawater to slosh over the ridge and into the bowl beneath the ice. The influx of a bed of water at above-freezing temperatures is eating away at the glacier from below, guaranteeing a continuous melting of the ice, which is adding hundreds of billions of tons of water per year into the earth’s oceans. It’s not known whether the eastern glaciers will eventually meet the same fate as the western ones.

What hasn’t changed, alas, is Americans’ chilly attitude toward the climate crisis. A Pew study a year ago found only 40% of Americans believe global climate change is a major threat, compared to 55% of Canadians and Germans, 64% of Italians and Spaniards and 72% of Japanese.

Indeed, Americans’ concern with climate change is declining while scientific evidence mounts. Gallup found in 2008, after Al Gore’s “An Inconvenient Truth” came out, that 75% of Americans believed global warming was happening, though only 40% believed it posed a serious threat. As of March 2014 those figures were 65% and 36%.

But those figures mask a deep partisan divide. In an October 2013 Pew survey, 84% of Democrats believed there’s “solid evidence the earth is warming,” compared to 46% of Republicans. Asked if global warming was “mostly because of human activity,” 64% of Democrats and 23% of Republicans agreed. Republicans were sharply divided among themselves, though: 61% of non-Tea Party Republicans agreed the earth is warming and 32% said it was mostly man-made. Among Tea Party adherents those numbers were 25% and 9%.

Among people who have the power to take action — enact a cap-and-trade system, tax carbon emissions — it’s a different story. The Pulitzer Prize-winning website Politifact reported May 18 that of 278 Republicans in Congress, only eight — five senators and three House members — “accept the prevailing scientific conclusion that global warming in both real and man-made.” That comes to 3%.

Flood of Reports Point to a Warming Earth — But Concern Drops