Should the Bible Have a Trigger Warning? 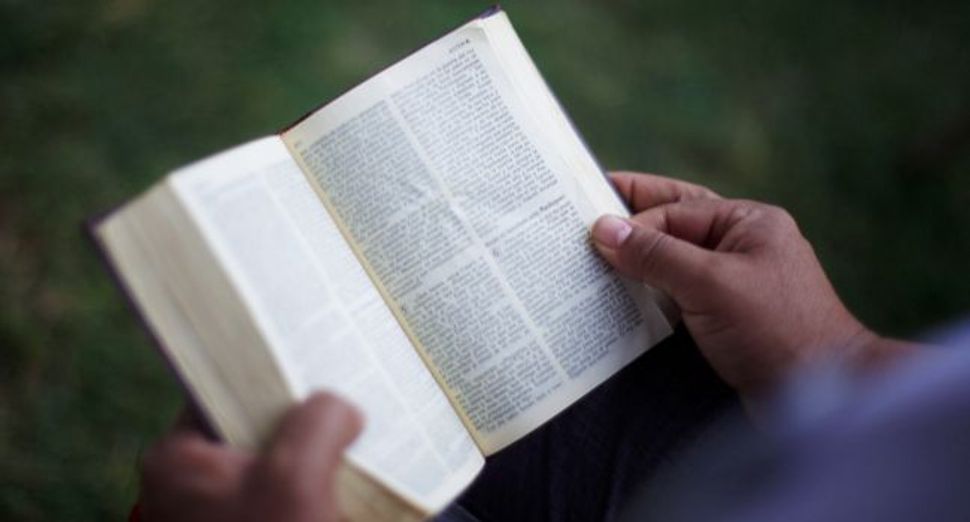 You know what could use a trigger warning? The bible. If any book merits a note of caution it is the one that is colloquially referred to as good.

In the recent debate over whether colleges should warn students of material that deals with potentially post-traumatic stress syndrome inducing topics like war, sexual violence, racism, and anti-Semitism, I couldn’t help but think about how the raw and vulgar bible has sat warning-less for centuries.

Students at the University of California Santa Barbara and Oberlin College believe novels like Chinua Achebe’s “Things Fall Apart” (for racial violence) and “The Great Gatsby” (for misogynistic violence) should be presented with a warning label, all the while the world’s most popular book, easily found at safe-seeming places like churches, synagogues and hotel rooms, is brimming with much worse.

The bible is a book without heroes or hagiography; there’s hardly a character who fails to misstep. Instead we get war, slavery, rape, deceit, plagues, smiting, apocalypses and, in some ways the most threatening of them all: soul-crushing doubt in the Almighty. And yet, historically speaking, how many soldiers, victims of sexual assault and believers have found comfort in its words?

For many of us today the bible is the stuff of myth or tribal tales, but in previous generations many took it as God’s word. Imagine the horror of reading about not just people but also God’s capacity for violence while also believing that God was the author.

So why didn’t the architects of the bible (you might believe it is God, I believe it was various people over time) try to do some damage control? If not by way of slapping a warning on the cover, at least in the editing of the text?

The bible is a raw, sometimes bleeding text, pulsing with fear and bitterness and the crumbling of will in the face of temptation. I believe that this very rawness is responsible for its endurance.

Because what is raw is also tender, and it is in this tender place where real transformation happens. The bible does not shy away from our vulnerabilities, nor does it seek to accommodate them. Instead, when read with an honest mind (which is, regrettably, not a universal phenomenon), it exposes us to them, and ultimately ourselves.

It is this intrinsically unapologetic nature of the text, its refusal to soothe or conceal, which not so long ago took me by great surprise and ultimately drew me in.

Until five years ago, I had never read the bible and knew of it only through the second-hand sanitized versions I learned at Hebrew school or from watching Disney movies. If I hadn’t been invited to be an artist fellow at LABA, a laboratory for Jewish culture which hosts a non-religious house of study, I am not sure I would have ever gotten around to it. So entranced I became with the unsparing nature of the text on human behavior, I eventually became co-director of the house of study.

Every year as new fellows come study with us, many of whom who have also never read the text, I see them go through the same experience of being caught off guard and shaken up by the piercing directness of the bible. They are triggered, and it is from that place that they are inspired to create.

I lack the vitriol some feel against those who are trying to make trigger warnings happen. Those students are well-meaning and want to protect the people among them who have experienced trauma. But the question is, what are they really protecting them from?

If it’s from reading something that might take them outside their comfort zone, that might cause more harm than good. (With exception, of course, of serious cases of PTSD.) As Los Angeles Times’ Megan Daum wrote in her column on the topic, we are already self-censoring enough: “Liberals stay away from Fox News. Conservatives shield themselves from MSNBC. We choose to live in particular neighborhoods or regions in part because we want neighbors who share our values. We rant away on social media, but we’re usually just talking to people who already agree with us. We call that an echo chamber, but isn’t it also a way of living inside one big trigger warning?”

If the ban is an attempt to shield some individuals from others’ insensitive comments, well this is what a good professor should help out with through the facilitation of nuanced conversation that makes everyone uncomfortable and not just those with a troubled personal connection. When everyone is vulnerable, everyone grows, through the development of empathy for others or a reckoning with their past. This is how we prepare students for a big bad world filled with wounded people and devoid of trigger-warnings.

The bible has long-served a similar role. Its nakedness pushes those of us who study it to strip down too, and contemplate just what is at stake for ourselves and those around us. It does not shy away from the dark matter of life, and so we should not shy away from it or any other of the good books that do the same, because reading them together is how we grow.

Should the Bible Have a Trigger Warning?